Turn key daily driver with fresh QUALITY rebuild on the original C code 289 10k miles ago, fresh battery and brake job 10 miles ago, newer dual exhaust, not wrecked or rusty, paint looks tired but with wet sand and buff would pass for a few more years. Optioned with sought after somewhat rare (for 1967) xr7 package, PS, PB, console, bumper guards and non original 14x7" Magnum 500 Rallye wheels. Since taking these photos we have replaced the fuel tank, DS arm rest, rear bumper, battery hold down and several other minor upgrades. This car was owned by a previous police chief of Silverton since the 80’s, has been a member of the Cascade Cougar Club and a valued customer of mine for many years and as a side note used to own the house I now own in Silverton. I will reduce the price a little and throw in some free parts if you live close by as it would put a smile on my face to pass this car on the road from time to time. I would be happy to take your rusty, wrecked or ruined 1967-1973 Mercury Cougar parts car in trade. Don Rush WCCC 5O3-463-1130 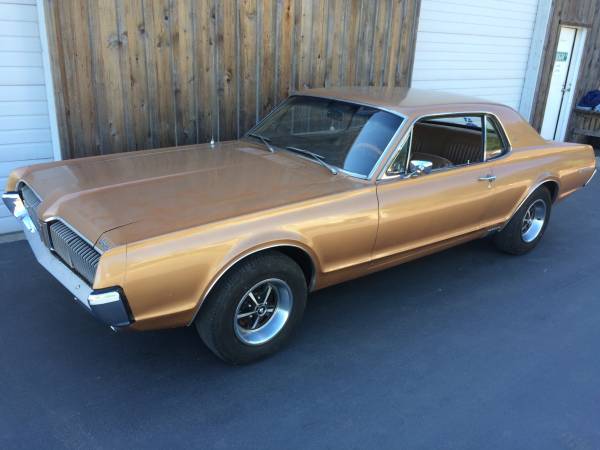 Pretty car. If I was closer, I would contemplate swapping my '67, as this looks to be a more solid car than what I’m starting from.

That’s a flattering description. Now you’ve gone and given him a reason to puff out his chest. Thanks.

Sigh. Really hoped this was the one! Ah well, nice talking to you this morning anyhow Don and congrats to the buyer.

So my search continues for a nice turn-key 67-69. Can go a fair bit higher than $7.5k for the right car so please let me know if anyone out there’s selling. Thanks!

Have you looked at this one? https://seattle.craigslist.org/est/cto/5669266527.html
I looked it over this weekend and it looks decent although a little high on the price.

Thanks Jeff, certainly worth a look. I saw this XR7 posted up your way too, also rather pricey. Does anyone know it?

That looks more like a $9000 xr7, I really like the 4spd std! Don’t even mind the Mustang wheels.

That’s a flattering description. Now you’ve gone and given him a reason to puff out his chest. Thanks.

I knew Jeff would have something to say about it.

I seriously tried to buy the 4 speed Cougar in Renton, but they will not come down to a reasonable price. They bought it at auction and paid way too much. Jeff and I both feel the car is worth around $9,000.00 or so.

I think there is more car and options in the XR-7 I bought from Don. I just need to keep myself from making too many improvements. After all I bought it as a fun driver, I already have a very nice show car.

Ow! I lost out but am happy for the buyer.

Hey Scott, thanks for the heads-up on the 4 speed. Please let me know if you hear of anything north of the border.

Meantime enjoy what looks like a great buy. Guess I’ll just have to be quicker next time!

No problem. I’ve been on the other end of the line as well. Not quick enough.

Thanks Steve.
Are you living in Yaletown now?

Queensborough Landing. Nice and quiet here with a view of the river and tug boats.

Oh cool. Move the cars and what not, or are they still at the parents’ house?

Does the 4 speed really have a 9 inch rear end?

Jeff looked at it for me, but I doubt that it did. It was a C code engine and zero option car, other than the 4 speed.

Congrats on a great buy Scott! I thought that you weren’t “allowed” to buy another one though!