In the summer of 1968 I was driving a 1966 GTO convertible which I ordered new. Unfortunately I had a bad wreck in this car and the insurance company decided to spend $3,000 to fix it instead of about $4,000 for a new one. After it was fixed it never was the same. I was in the market for a new muscle car. I was living in East Tennessee and saw a used 1968 Shelby Mustang KR-500 convertible for sale. It was blue with white interior and white top and the dealer wanted $4,000 (it had about 3,000 miles on it). My first two cars were convertibles and I wasn’t sure I wanted another one. Also the white interior didn’t appeal to me. However, it had a 428 Cobra Jet engine and I did like that so I went home to think about it. When I came back the next day to buy it the car was sold.

I really liked the 428 Cobra Jet engine so I went looking for another car with this engine. What I found was a red 1968 Mercury XR-7 GTE with the 428 Cobra Jet engine in Bristol, TN. I guess this Mercury dealer had gotten one of these cars because this was the home of Bristol International Raceway. Anyways, I traded for the car and drove it for two years. It was a very powerful car and I had a lot of fun on the streets of my home town. I moved to Atlanta in the summer of 1969 and met and married my wife. The Cougar didn’t have air conditioning and she didn’t like that. I traded it for a sedal with air conditioning.

I would have loved to have been able to have kept that car and in the condition it was when I bought it new. I would also have loved to have stayed 24 all my life. But now at 70 I can look back and say, I was one of 37 original owners of a 1968 Mercury Cougar XR-7 GT-3 with a 428 Cobra Jet engine.

Anytime you find yourself in Southern California look me up and you can take mine for a spin!
You’ll feel 24 again!!!

Welcome to our little CC Community!

Great story! You should order the framed Elite Marti report for your car. At least you would have the window sticker and all the stats. Thanks for sharing! Any vintage pictures you can share?

Thanks Gary, I live in north Georgia and I don’t think I will be back in SoCal anytime soon. I was in the travel industry for about 45 years and did spent a lot of time there. You are a lucky guy to still have one of these great cars. I still laugh at the factory rating of 335 HP. More like 435 HP.

Welcome to the Classic Cougar Community. Thanks for sharing your story. Do you have any pictures to share of your former GT-E? Jim Pinkerton is the GT-E Registrar and you might contact him here by the user name Cougar1 and pass on any information that you might have for the GT-E database.
Steven

Sorry Don I was trying to reply to Gary. How do you order a Elite Marti report? Back then I didn’t even own a camera. However, the guy that bought my Cougar did send me some photos. I will try to find them and post them. He didn’t like the matt black paint on the hood and painted it silver to match the bottom half of the Cougar.

Steven, I haven’t gotten my replies rights yet. I did contact Jim several years ago and he even put me in contact with the guy that has my old Cougar now (or at least about four years ago). He lives in North Florida.

Well, maybe we’ll meet in the middle sometime. Just thinking if there is a 50th anniversary reunion, say in Dearborn - - it could happen!
Ours has been in the family since '77 (as everyone else here is tired of hearing). We’re the 2nd owners. Lots of fun and stories associated
with the beastie! Would love to see those early pictures if you can find them!

A few of us from SoCal remember a W code GT-E owner named Bill Riddle. He traded a 289 Cobra in on his GT-E. Bills wife at the time insisted because of the lack of a back seat in the Cobra (they had small children). To date that GT-E was also the only handicapped hand control Cougar I had ever seen. Bill had lost the use of his legs in an accident, and had it converted. I know Royce probably remembers the story better than I.

Welcome! Did you have nay idea, at the time you bought it, just how rare the car was?

That is very cool! Always great to read about original owner stories, or even “way back when” car stories. It gives a great glimpse into the history of these cars and sometimes answers how / why they got where they are today.

xr7g428, The salesman at the Mercury dealer told me it was one of 50 to be made in 1968. It was actually less than that. I really liked the sound and power of the 428CJ, the fact it was a hardtop and an automatic. It was red over silver with dark red (burgundy) leather interior. My first car was bought in 1964 when I was 19, a 1957 Chevrolet Belair convertible, cost $900 used. The 2nd was the new 1966 GTO convertible, 4 barrel 389 4-speed, blue-green with black bucket seats, console, teak steering wheel and my 3rd was the 1968 Cougar XR-7 GT-E 428CJ. My cars were downhill after that.

222.tif (540 KB)
Here are some photos the 2nd owner of my car sent me. Note, he didn’t like the matt black on the hood and repainted it to match the silver on the bottom of the car. Also note the Dunlop tires. When I got married in 1969 I was managing a Dunlop Tire shop in the Buckhead area of Atlanta. These Dunlop radial tires were really hot at the time. They had a dog bone tread design.

Those are great pix! Note the smog has been pitched, and please note the black air cleaner lid.
“RAM AIR” decal from a BOSS 351???

93RGTE, I didn’t remember it having the Ram Air letters on the hood scope either. As I said before, I didn’t even own a camera back then and only have one photo that I took of the car and it only shows the back end. I guess the 2nd owner put these decals on when he had the hood painted silver.

The only other photo I have of my car. This was taken as my new wife and I were leaving after our wedding on July 2, 1969. 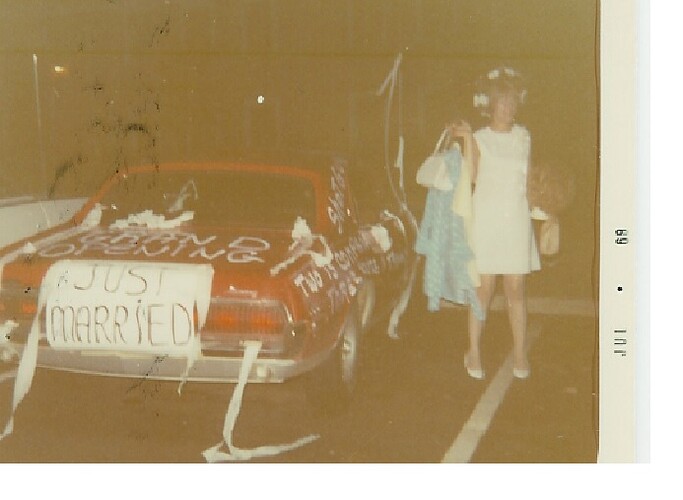 The really funny thing was that the next morning when I got up I left my new bride at the Marriott Hotel in downtown Atlanta and went out to find a car wash to get off the white lettering that my friends had wrote on my Cougar.

Had your priorities right even back then! LOL

Those are great pix! Note the smog has been pitched, and please note the black air cleaner lid.
“RAM AIR” decal from a BOSS 351???