Anybody have some images of how to mount the tilt away motor and bracket above the gas pedal. Not obvious to my limited mechanical ability and the shop manuals do not really show the mounting points. 1969 XR7 AT. 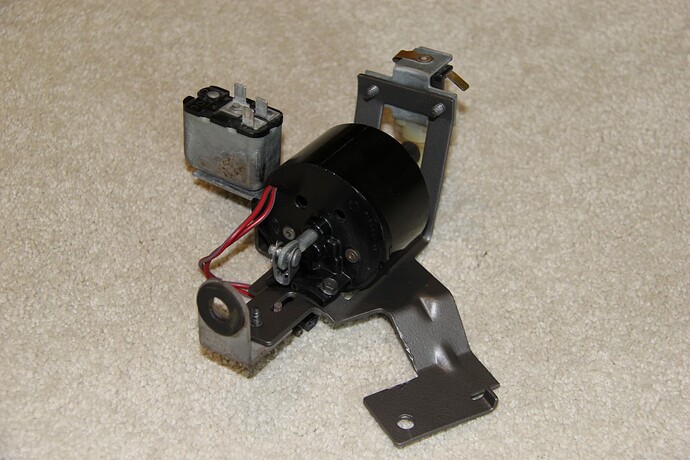 I think I figured it out. I can see the foot of the bracket is sandwiched between the lower dash and the dash support. 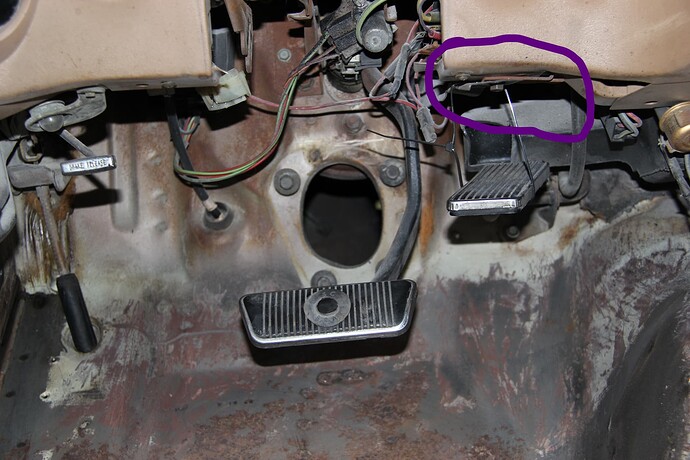 I finally figured that out looking at my disassembly photos. The bracket was empty so I had no idea about its purpose, much less that I had a tilt away steering wheel! And I owned a 1970 XR7 and a 1969 XR7 in the mid eighties!

Hi halbey : Good you got the bracket and motor back in place. But I looked at the set-up in my 1969 XR-7 ( San Jose assembly ) and the tilt-away bracket isn’t sandwiched, it lies at the ‘bottom’ of the three layers of metal: (1) the dash itself ( and it is made of two pieces of metal, at that point, that are welded together ), (2) the RHS dash support bracket and lastly (3) the actual tilt-away bracket - which is the thickest of all three layers.
I noticed that the motor bracket is limited in it’s adjustments, to the left by a small downward folded ‘tang’ on the dash support bracket and to the right by the upward pointing tang on the tilt-away bracket. This was probably intended as an aid during assembly in locating the entire unit between these two points ? Or was it to provide clearance for the plastic steering column shroud on the RHS ?
Considering that a small number of Cougars got the tilt / tilt-away option, I would assume the the lower dash bracket would be installed first, and then the tilt assembly bracket - why would the line workers be expected to undo one bracket and move / bend it out of the way to install another option. As well the whole thing was probably already on the lower dash panel, when it was installed.
Either way the layering of these three parts looks more flush ( in my Cougar ) than in the image you have posted.
Glad you are getting the unit together, and learning about it’s intricacies along the way !

Gah,
Thank you. I was going by what I got. The bracket was empty (all the motor components in a box and still in working order!) when I bought the car so it obviously has been removed before. Much easier to install and adjust with your input. My XR7 is a San Jose car as well.

I will be installing the heater control and ignition switch connectors first and then wiggle the tilt away assembly in afterwords. Should be fun!

Having looked again ( in more detail ) at your tilt-away motor, bracket and relay assembly, I notice that the L-shaped ( adjustable ) bracket positioned in front of the motor, has a circular foam ( likely quite hardened ! ) gasket - that usually between the cable assembly ( C9ZZ-3E520-A ) and the bracket itself. It is not usually a ‘stand-alone’ piece, as it is retained onto the front of plastic flange of the cable by the compressible ‘claws’ that slide through the hole in the L-shaped bracket.

1969 Cougar tilt-away cable assembly1185×590 68.7 KB
Also the U-shaped clip, which is attached to the plunger on the motor ( and retained by the clevis pin and R-clip ) is actually part of the end of the cable. Once you re-attach the cable, you will find this U-clip is already part of the cable. At least you luckily have the clevis pin + ( small hair pin ) R-clip, as they are usually long since lost / gone.
halbey January 28, 2023, 8:10pm #8

Gah, thanks for the extra update. I have the clevis assembly on my column. I had WCCC rebuild the column. Just installed the wiper and ignition wiring plugs and secured everything for the blower motor - trying to find a place for the ground wire! Have all the vacuum lines hooked up for the heater control and the wire leads ready to hook up as we speak. I think I will try mounting the vacuum motor with the heater and radio out so I have more hand room and better vision.

Believe it or not the original pin was nylon or plastic. Most have long been lost.

That would explain why the tilt away function was probably lost on most owners of these cars.

I think I will keep the steel pin!

The broken plastic pin made me smile - as that’s exactly what happened to our Cougar, back in 1969, only 1/2 the way through the warranty ! I recall my father finding the plastic bits on the floor mat, and at the same time the tilt-away feature stopped working. Not rocket science to figure out the connection, so to speak ! The dealership ordered a new pin ( C8ZZ-3E683-A ) and as it gets quite cold here in the winter, this one lasted not much longer. Another was ordered ( and a spare - which I still have in the original Ford parts bag ). This one also broke - so the dealership, after a lot of phoning around, was advised that repairs were being completed with a metal clevis pin and “R” clip. Problem solved, and it’s never been an issue since !
The only difference I can see is that the plastic clip allows for NO slack or play between the U-connector on the cable and the hole in the shaft of the vacuum motor. Whereas the Clevis pin / clip has some play in it - but obviously the system can be adjusted to accommodate a small amount of fore and aft play ( or buy a larger diameter Clevis Pin ? )

The link Royce has supplied to the Dead Nuts On reproduction on their web page is indeed a ‘dead-ringer’ to the original. But I’ll keep the metal one in place - not to tempt fate. Then again my Cougar NEVER goes out in poor or cold weather anymore - too much a pampered feline now.