Ok. Here it is, the first post of what will be a long thread, I imagine. At this time, I am coaching high school football, so the build progress will be slower than my budget allows (which is slow enough all by itself!). The first thing I did was repair the driver’s side quarter window. It now goes up and down. Hooray! I need to replace the bushings, but it will do for now. I also started looking at vacuum lines, since it will be a while before I pull the engine and tranny. It’s got a crappy old Motorcraft 4v on it and I can’t tell what kind of intake is there yet.

Transmission seal leak. It’s got an automatic in it now and I want to put a 5 speed in it at some point, so I don’t want to fiddle too much with the automatic. Isn’t there some kind of additive that can be added to the fluid that expands the transmission seals and slows or stops some leaks? Anyone have any experience with this?

Cowl! Argh! Yes, the damned cowl leaks! Not a whole lot, but it does leak. So much for the minimal bodywork! I’ll just have to keep it out of the rain until I decide to get around to that enormous job. Makes washing it less enjoyable, though.

That’s all of the current bad news.

Has anyone here put a late 90s 8.8 Explorer rear end in their early model Cat? I read that those make a good option and they come in the 3.55 gearing I want to put in it. Also have disk brakes on 'em. If one of you has done it or knows about this, I’d be interested to hear about it. What’s the difference in width, for instance?

The Coug also has the old FoMoCo AC unit (non-functional) on it. R12, of course. Good R134 conversion kits, anyone?

I’ll keep posting as I go along. Thanks for your support, guys!

BamaExile, contact member Jeff Hutchens. He put a 8.8.Explorer (don’t know what year though) rear end in his '67. John

Good luck on the project! Check out my build thread https://cccforum.discoursehosting.net/t/coug67/922/1
what motor does yours have?

Yours looks pretty nifty, Coug67! Anyone got any suggestions about the Explorer rear end? Also, what size wheels and tires will fit in the wells? I was thinking 17" wheels and 225/45s on front and 235/45s on the rear corners, but I am open. All I know is those 14s and wire hubcaps have gotta go soon!

Anyone have any suggestions on headers that fit well on a 67?

I have JBA’s on my 68/302 that fit just fine. I have manual steering, though, so I don’t know if that will make a difference.

Well, I’ve gone and bought myself a rear end from a 99 Mercury Mountaineer, which I believe is the same as an Explorer of the same year. It’s an 8.8 inch limited slip with 3.73 gears and disc brakes. Cost me $200. If anyone has any experience with putting one of these under a 67 or 68 Cougar, I’d appreciate it. I have read a bit about it and found different answers. Some people put them in as they are and others shorten the longer tube (how much should it be shortened, if shortening it is the best way to go?) and use another short side Explorer axle for that side. I’d also like to be able to plan ahead and get some new wheels and tires ordered and ready to go for when the rear end is installed, but I’m not sure what the backspacing would be at that point and if I will need spacers with this rear end.

I’m sure I will need a proportioning valve with the disc brakes since I will have drums on the front and discs on the rear, yes?

No one has any suggestions?

Well, everyone has the right to do what they please with their car, and it should be that way. Problem is that when you ask for advice doing something maybe not so wise, people will refrain from saying anything. This is one of those cases. Now feel free to do what you want. This is not about telling you what to do.

IF you want to end up with a 3.73 posi with rear discs, it is way easier to buy a posi and gear set to go into the factory 8 inch in your car. Then you can easily add Crown Vic rear discs. I know what you have bought seems cheaper, up front, but it will require a lot of money in modifications to get it to really work right. It can be done, but you are kind of on your own in doing the engineering to make it work.

There is a school of thought that brakes are pretty important to safety and so they are one thing that you want to get absolutely right. Putting rear discs on with front drums is a real stretch. Might work for a while to get you by, but if you wreck the car, then maybe not such a good idea.

You haven’t said what you want to do with the car. Seeing as how a new Camry can blow the doors off all but an extremely built Cougar, most guys are building cars they can drive and have some fun with, but not really race cars (and if you are building a race car the rear you should be thinking about is the 9".) If you are going for a driver, then the things that will give you the most bang for your buck will be a set of lower rear gears, even with an open rear axle, and a set of front disc brakes. Freshen up the front suspension and steering gear and you will be very surprised at just how nice the car can be.

I appreciate the input and, believe me, I have considered other options. Front discs are also on my list of things to do, as is a T5 tranny. I have the labor resources to make the rear end work properly in my Coug. What I was looking for was more detailed information from someone who has done the Explorer rear end mod. I’m the kind of guy who gathers tons of information on a mod before I get started actually doing it. I’ve read a fair amount about this mod, but still feel the compulsive need to find more. That being the case, I very much appreciate you coming at it from the other side!

If you are driving this car while you work on it, I’d do the front disk conversion 1st. It will give your stopping power a big boost. The t5 will be the biggest improvement to the “fun factor”, and I’d do that 2nd. Doing the 8.8 swap w/the rear disks won’t help your stopping power all by itself because even the factory drums will lock up under braking. The stock rear (if it works OK, and they usually do) can be left alone for a long time while you spend $ in other areas.

I never understood the benefits of the 8.8 swap, when you can still get 9" rears from '69-'70 Cougar parts cars that will bolt right in. I can certainly appreciate the amount of work & engineering required to make it work though.

I think a lot of guys are underwhelmed with they discover just how poorly these old cars drive. 45 years is along time for a vehicle that was built to last less than 5. Getting everything, (brakes, steering suspension, engine, transmission,etc) all working like they did when the car was new makes more difference than what you get from hopping one up. A nice tight '68 J code standard is a pretty fun vehicle, but a worn out survivor can be pretty uninspiring.

I hear ya Bill. You also have to dial it back a bit when you get behind the wheel of the old cars. Especially the ones with drum brakes. This was not a problem back in the day, when the cars on the road all had roughly the same braking capabilities. Nowadays that minivan in front of you has 4 wheel discs & when the soccer mom behind the wheel rails the brakes you best be far enough back to stop too.

I can’t quite picture what a panic stop with rear disks and front drums would be like, but I suspect it would would not be pretty.

What you need is a 8.8 from a 85-93 mustang. Width is the same almost, cut off all mustang mounts and weld on spring perches very simple. For axles, used axle from 8.8 ranger, riverside I believe and from an aerostat pass, that will give you 5 lugs on the cheap. Mark which side axles are from. They are 28 spline, mustang posi is 28 spline, use your explorer disc setup or use newer mustang brackets and discs. Or use same mustang housing, your explorer 31 spline posi and new axles, they cost 250. Or use 94-96,7,8 mustang complete axle setup, it is 1 1/2 inch wider, then use 5 1/4 to5 1/2 inch backspace wheels.

I’m not planning on driving it until I get the front discs installed, too. I’ll probably drive it once to be sure the rear end is working ok, but then I will park it and get the front brakes done. I’m not making it into a drift car!

Actually, I’ll probably get the fronts done before I even put in the rear end, anyway. I’m just gathering parts and the rear end turned up, so I went ahead and bought it.

Front discs should arrive on my doorstop today. I’m starting to build a fair pile of parts and the wife is wondering when the parts will start going on the car and off the garage floor. Can’t get started until high school football season ends, though (I coach a high school football team), and we made it to the playoffs! The Cougar is taunting me as the season gets extended! Arg!

I’m having difficulty making a cosmetic decision now. I just can’t decide what wheels I want to put on the old cat! I absolutely hate the 14" steel wheels with the wire hubcaps! Not cool at all. Those of you who aren’t too busy are encouraged to voice your opinions! Hahaha!

I would say what others have brought up. It all depends on what you plan to do with the car. Knowing the direction of your build will help make things look well planned and not just “add on’s”. That being said I like the look of factory wheels on stock looking Cougars. Then there are the classic custom wheels that look great on any Cougar, like Torque Thrust or Craiger S/S’s. Take a look at WCCC’s site they have a great selection. Also look through the image gallery here and see what you like best in the photos.
Steven

Disc brakes have been installed on the front. Still have to install the proportioning valve, but they look much better than those clunky drums! 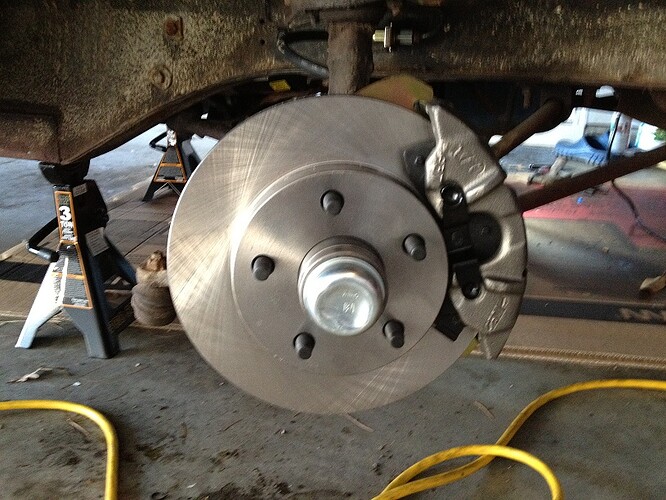