Saw this at SEMA, had me fooled for a second, looking at it head on.

Nicely done if you ask me.

They did a really nice job on that!

I thought that was pretty cool looking. Just had to do a google for retro shelby mustang. Company by the name of Retrobuilt. They even do a 'vert version!!! Here are a couple of links I found:

Well the work done on the car looks very nice, they have done a great job.
But set aside the great quality of the job itself, it´s totally out of proportions, it just looks odd, especially the rear end, it looks just like a 70´s Datsun of some sort.
From a distance it may look very good, but on close inspection, it just do not look right, it lacks the low sleek proportioning and lines the real thing has

it just looks odd, especially the rear end, it looks just like a 70´s Datsun of some sort. From a distance it may look very good, but on close inspection, it just do not look right, it lacks the low sleek proportioning and lines the real thing has

Hadn’t thought of it, but now that you mention it, I do see a little B-210’ish look there!! LOL!!!
Must be the height of it on the proportioning. I didn’t see anything about the height, but the Mustang Monthly article mentions it being 4" longer and 4.5" wider than the original. Not that I have seen that many (if any) originals up close and in person, but I find the 4" longer really hard to believe.

I posted on MC.net about this company about two months ago. They were selling one of these retro Shelby’s on a Mecum auction. The have a good looking gallery of pictures. I really like the 67/68 style on the current Mustang platform. It would be cool if something like this was done for a Cougar on a new Mustang platform.
Steven

Quality of work is probably nice but its not all that good looking. Looks to “Pimp my Ride”. Just not proportioned right–just sayin!

Scott, did you get a chance to see this one? A 2011/1968 fastback blend. I liked it a lot better than the Camero/Firebird blend that was there. I like the rear end on this one better than the retro Shelby, it was just too fat. 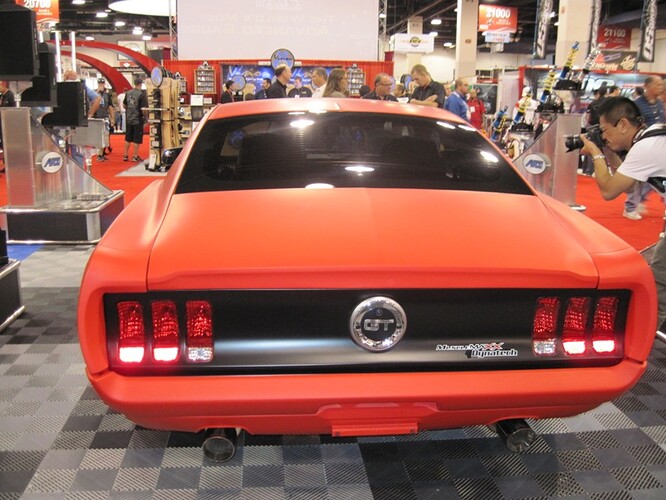 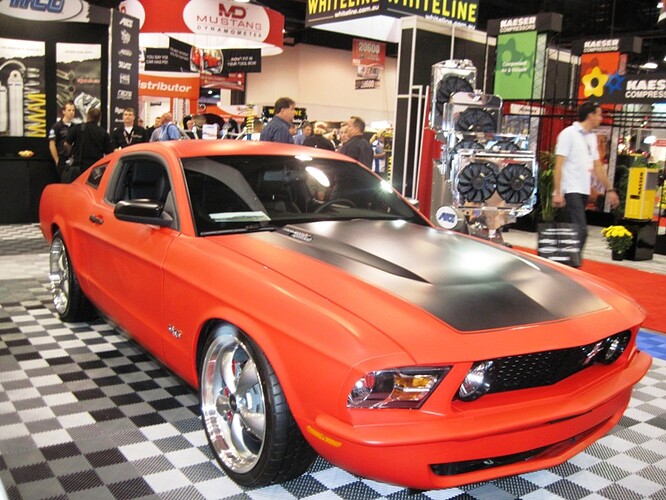 I did see that one. I liked the concept on that Mustang, but it looked to me like they had a plan for the rear and sides, but no plan for the front end.
I wasn’t liking on the satin finish paint job. Looks like a trend at SEMA, even saw a Bentley 8 painted a satin color.

Scott I thought the same thing about not having a plan for the front of the car. The back looked good in the photos but the front looked stock. I like your job title for WCCC, very cool.
Steven

Wheels are too big for my taste.

Wheels are too big for my taste.

Wheels look fine. But I think the windshield needed a little bit of chopping to lose the curved bubble roofline.

Wheels look silly. They’re the most dominant feature of the car. It’s a shame.

Here’s some pics of similar cars from the Tulsa Shelby Meet last year:

I like each of them in their own way. By the way welcome cj750.
Steven

They all pretty much look like a bad ending to a good start. So I guess when all else fails, turn em Ghetto.

I like this one. The Shelby concept looks good in the front, but from the front wheels back forget it. Yes they did a great job with what they had to work with, but still like others have said, the proportions just are not right. It’s like the Challenger, too tall in the back. The same for the mustang in this case. you just can’t replace perfection with what was and we are still looking for that in these concepts as well. The link with the orange mustang, is one I would buy in a second. It is more proportioned throughout the car and yes the front end is new but I like it. For the life of me though, this goes for all new cars, what is up with the wheels? The part of the wheel that is bolted up to the hub where the wheel nuts are, are so close to the out side edge of the rim, way too much back spacing. This looks silly to me and really makes the rim prone to bending in the back side. This is one place where I can say, Please give me some lip! Old school I guess.