Car is un-restored and in need of a full restoration, but runs and drives great. Body has some rust in the typical places - a few bubbles under the vinyl top around the sunroof, small spots in the corners of the doors and on the top of the front wheel wells in the engine compartment where Cougars and Mustangs sling up mud and dirt, but overall, foundation is nice and solid. See link to detailed photos.

Originally Polar white, with a black vinyl top and a black leather interior, car looks to have been repainted green at some point and currently has a poorly executed red repaint which was on the car when I acquired it 12 years ago. Lots of small blemishes under the paint. The body has a few small dings and it has a GT-E hood scoop on it now. Fog lights are incorrect. Fog lights and sunroof do not work but the sunroof is complete. I have opened and closed it by hand. The motor is the later, direct drive unit with all the accompanying gears/drives, etc. in place. No expensive and ultra rare sunroof parts needed to the best of my knowledge. G unique side mirror is there along with original G front and rear valences, both in nice shape.

Along with the red paint, car was given a white top and a custom red and white interior. Luckily, the G console and shifter were left alone and in very nice shape. Original, black dash pad is in excellent shape with no cracks. The custom carpet and upholstery was carried over into the trunk - this was immediately removed when I bought the car but the carpet had held in moisture resulting in some surface rust but the trunk metal is solid. Again, see pictures in link for details.

I have the original XR7-G badge and the unique mounting plate that goes on the grill.

Lots of bits and pieces come with the car, including:

Feel free to pm me with any questions or additional photos. Asking price is $18,500.00

Good luck on the sale. Nice car. That red & white interior though hurts my eyes.

LOL! Yeah - don’t know what they were thinking.

The needed, black, '68 XR-7 interior is included with the car.

Polar white with a black top and black leather interior is such a nice combination, and this G breaks down to a one-of-one with this engine and that trim.

The G at the Henry Ford Museum has a similar combo. 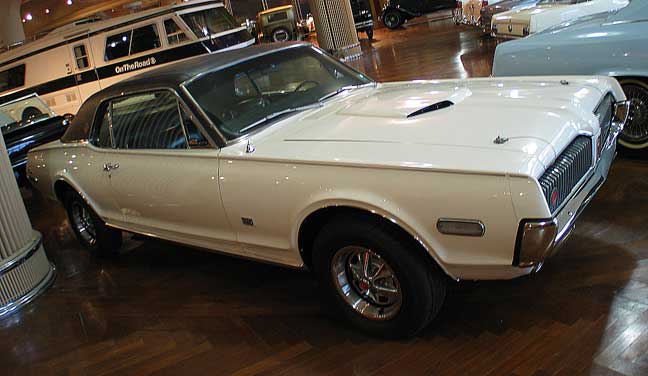 I like the white and black color combo. If I didn’t have my convertible project your G would be a great project.
Steven

You would think that with a black vinyl top, a black interior would be very common but it appears that blue and red interiors were popular with that combination.

G’s have a lot going on design-wise as it is, I think the more it is smoothed out the better. Keeping the color combos to two instead of three is one way. Or even one - like triple black

Good luck with the sale Phil, I cut & pasted from your post & sent it to a few guys around here that might be ready for their next project.

What a great color combo, and I like your “triple black” idea as well. I was originally going to that to R Code, but chickened out when I learned it was 1 of 4 in yellow & 1 of 1 w/black interior.

You’d think Zoli would be all over this car.

He doesn’t have one in this color, lol…

and he’s got a big garage to fill…

Thanks for doing that Chris

You answered that question before I ask it. I figured if you were selling it you had a replacement.

What’s the details on your new G Philip? When did you get it?
Steven

It’s a bit of a dance at the moment - when I get the “new” G safe and sound in my garage here in Richmond VA I’ll post about it.

If I had the space, I really would keep this one as a driver. The fact that it needs a repaint really makes for angst free motoring.

Since I work out of my home, half of my garage is taken up with flat files, art supplies and office stuff. Can only squeeze one Cougar in there.

I am negotiable on price - especially for another Cougar dude or dudette.

I am negotiable on price - especially for another Cougar dude or dudette.

In all seriousness, good luck with the sale. Wish I could help you out.

If we hadn’t just dropped a boatload of money on B3Cat, I’d be all over this (even though I’ve seen that interior in person! ), especially with the parts that come with it. I’m looking forward to seeing the replacement G.

Looking forward to seeing you at Carlisle Bill

I’m curious on how negotiable on price you could be.

I have written a detailed, honest description plus provided lots of photos of the car along with most of the parts that come with it (I realized I didn’t take a picture of the rocker trim, for instance).

Feel free to pm me an offer, or if you like, give me a call Sunday evening (April 19th) and we can discuss on the phone.

Philip good luck with your purchase and getting the G home safe in your garage. I know the feeling of excitement and being nervous until the G is in you hands. My brother and I have been in those same shoes.
Steven

A G you can buy and enjoy for a while before needing to tear it apart. Not many like that around. Good luck with the sale Philip

I’m driving the G up to the Carlisle Ford show this weekend - so if anyone wants to eye ball it in person stop by the Cougar tent and say “hey”.