Years ago when I bought my car, there was a Mustang guy in town who had NOS radio bezels. I bought one because --although I’m a stock kind of guy-- I knew that I wanted at least decent ‘modern’ audio and that the OEM radio was non-standard to modern head unit conventions. I still have the original AM radio and bezel, but I’ve modified that replacement bezel a couple times over the years to accept various modern head units. I modified it again this week for a DIN unit installation. Now I’m ready to hook it up but I need a new dash-mounted speaker. (Additional speakers in other locations may follow at a later date.)

I’ve spent most of the day researching the archives here and at MCnet for information on the dash speaker and potential replacements. Other than a direct reproduction replacement, I haven’t found any clear data on what works and doesn’t work “out of the box.” I’m hoping this topic thread will serve as a repository for some solid info on the topic.

For the record, the OEM speaker (C7AZ-18808-D) is a mono 5x7 oval with a single paper cone driver. Mounting is under the dash via two screw studs (w/ standard hex nuts) at the ends of the long axis. Although I’ve found a few posts that claim it can be changed from below (up behind the dash, perhaps only on non-A/C cars?), the easiest access appears to be achieved by removing the PS dash trim and/or panel, which allows access via the opening in the metal dash face above the radio, where the A/C vents and/or XR7 courtesy light toggle switches are located. (This is how I’ve accessed mine, which is an A/C car.)

As far as replacement speakers go, there are currently four basic options:

I’m ready to move on from mono, so that leaves the other two options. I’ve looked at Bracketed Dual speaker options (leonbray’s installation being one of the better examples), and that configuration just doesn’t do it for me. That leaves the DVC option, for which I’ve found three products:

Truth be told, I had already decided on the RetroSound R-57N and ordered it, but when it arrived I found that it isn’t a true 5x7 and that it didn’t come close to fitting: 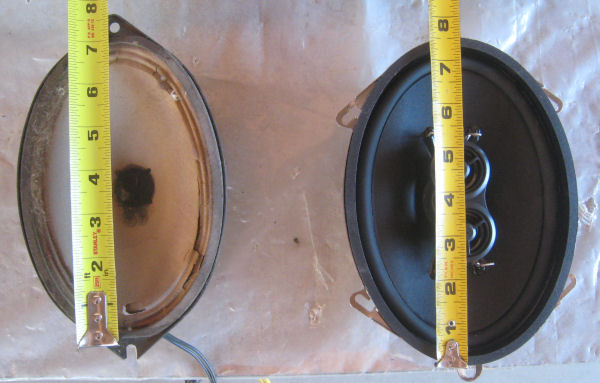 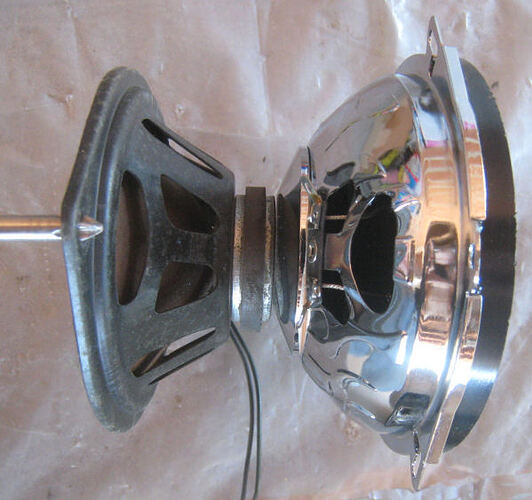 OEMvR-57N-depth.jpg600×563 61.1 KB
Although the R-57N is 1/2" longer than the OEM speaker along both axes, I think I might’ve been able to get it into place, even if it required trimming off the side mounting tabs. The primary problem was the integral chrome baffle on the back of the thing, which conflicted with the defroster duct.

That leaves just two options that I know of: the Custom AutoSound’s 5x7 and RetroSound’s Standard 5x7. A lot of Custom AutoSound reviews claim that their products (especially their head units) are hit & miss as far as quality goes, so I’m a little wary. However, I’m pretty sure that RetroSound’s Standard 5x7 has the same 5-1/2" x 7-1/2" size, though it appears that the speaker’s back profile is similar to the OEM.

To those of you who have installed either of these speakers, what info can you share about fitment and quality? Or is there another single-location “stereo speaker” option that I haven’t discovered?

Why are you hooking up a modern stereo to a single center mounted speaker?

or just get the kickers and put your own speakers in them
http://www2.cougarpartscatalog.com/kmc-2-blank.html

I appreciate that a center speaker is not ideal for a modern head unit and that other, better sounding options are available. As noted in my original post, “Additional speakers in other locations may follow at a later date.” Right now, though, my goal is to select and install the center speaker. I’m just hoping to glean some product information and installation experience from others who’ve already fought the battle (and record it so others can learn and benefit from it in the future).

I just went with a pair of small Infinity rounds on a homemade bracket. STEREO

I used the Custom Autosound version. It fit fine with the defrost duct, but I did have to cut out a section of the dash sheet metal (pic). Since then I think they have updated it to a more flush design with a built in protective grille (see the main picture at the link provided) so this modification might not be needed anymore.
Can’t comment yet on sound quality, but I do like the idea of balancing out the sound stage with something in front closer to ear level. I plan on also running hidden kick panel speakers, and 6x9’s in back, all wired in to an amp in the trunk. Trying to keep everything out of sight / noninvasive.

OK, so I just realized I never followed up this little project thread. Here goes.

I opted for Custom AutoSound’s 5x7. Here are some dimensional photos, which confirm a true 5" x 7" at the face of the speaker. The frame and mounting tabs extend modestly beyond 5x7. 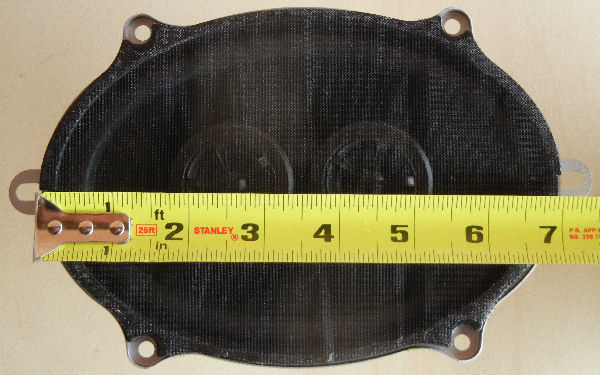 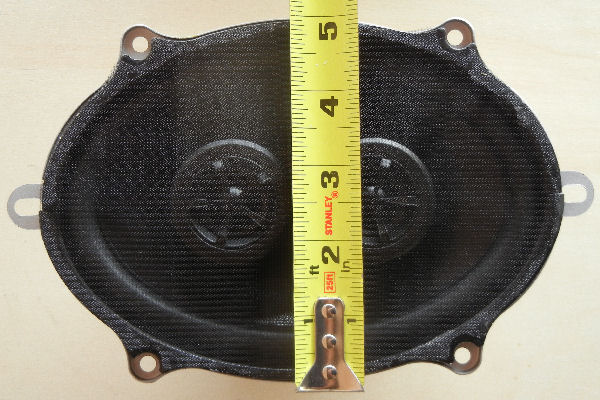 Note that the speaker comes with a fabric screen cloth affixed to the front / top of the speaker, which will help keep dirt & debris from dropping onto the cones. This is particularly good in my situation as my dash is split and the speaker is partially exposed.

The speaker back, FWIW: 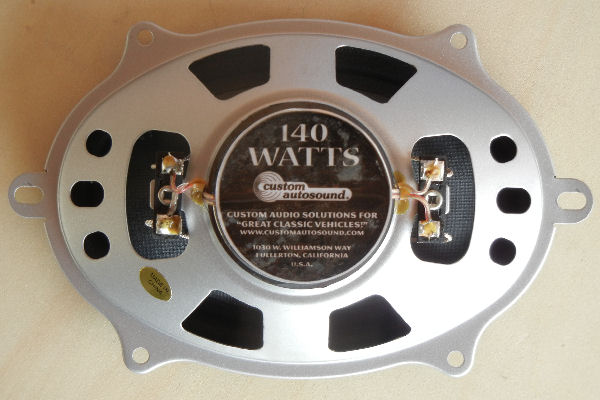 And photos of the center speaker location, with and without the speaker installed: 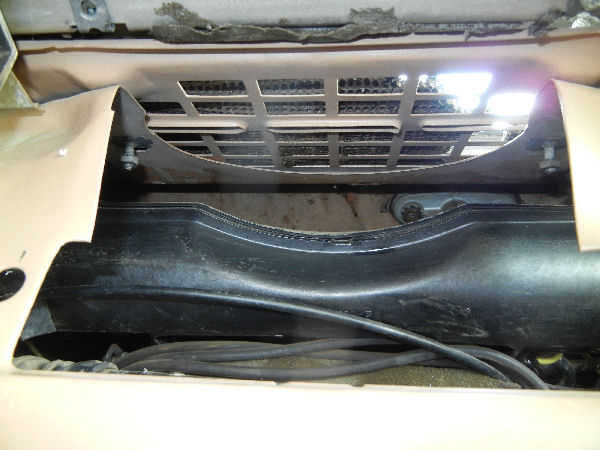 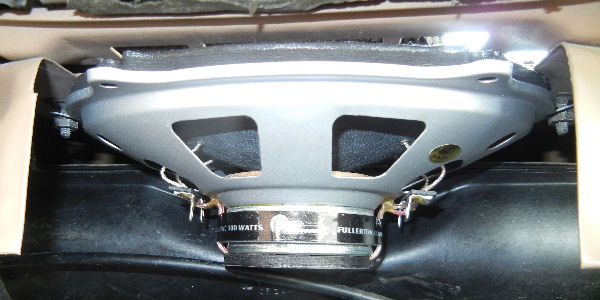 It was a little bit tight at the defroster duct due to the thickened perimeter at the front of the new speaker, but it fit nonetheless.

I’ll finish with a brief review of the radio install. I opted to upgrade to a modern DIN-style radio for a couple reasons. First, it has bluetooth capability (nice for music and hands-free telephone), and, second, I already owned it (for/from another vehicle)! 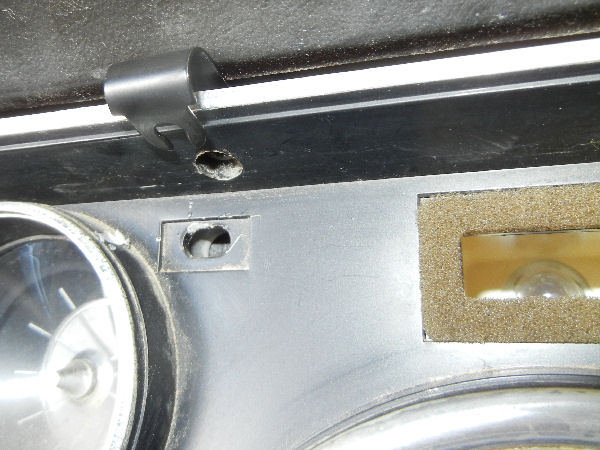 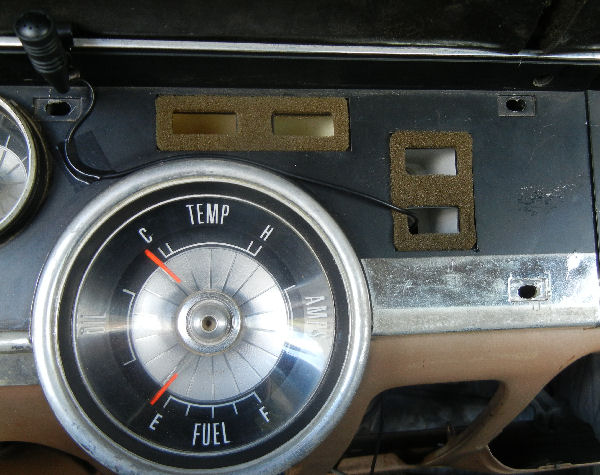 I modified the extra radio bezel to accept the DIN (more close tolerances, but it fit), and put it all together. Although I need to purchase a trim ring for the radio itself (tossed it after prior installed in different vehicle 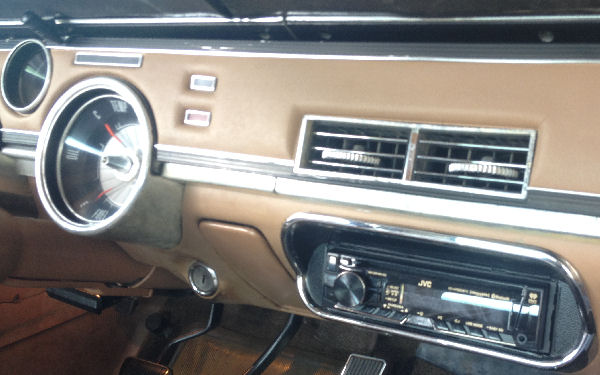 The Custom Autosound speaker sounds fine, and I’ve limited the radio output (an optional setting) to protect the speaker. It’s plenty loud enough even with windows open. The mic works well (better with windows closed, of course) and is all but invisible from the driver’s position.

I’d like to add kick panel speakers sometime in the near future – already watching for a nice pair of OEM pods – and rear speakers after that. All in due time.

Good info, Thanks for the time to post it. It will come in handy for me at some point as well