Now that I added my long awaited 1967 Cougar (XR7 Dan Gurney Special) to my garage, I struggle with the guilt of leaving my 1967 Mustang all alone in the garage after 20 years of great service (then vice versa).

My story goes…
I remember being a kid (probably 8-10 years old) and seeing this awesome car go by. Not growing up in a muscle car family or anything special owned in the family, it was my first impression of a cool, real life car. Though I collected match box cars, I don’t recall every thinking about how these were REAL cars and that they were something that you actually owned in real life when you grow up.

As the years went by, I found Mustangs to be awesome as I did many other muscle cars (Chargers and Firebirds). My neighbor down the street even had a 1973 Cougar XR7 that I thought was cool. I eventually bought a 1966 Mustang Fastback (6 cyl) and a 1967 Mustang Fastback (289 engine donor car). It was fun to work on but I never had the funds to get it going and not experience in working on cars other than learning as you go. I eventually sold the car off hoping that one day I could get a classic Mustang like those in the Mustang Magazine, and the funds to at least have something that I could drive. I used to admire my aunt’s friends car which was a 1967 Mustang. She was about 5 hours drive away. When I was in my 20’s, I got a call that Shirley was selling her Mustang. After negotiating a price, we came to an agreement ($1200., even then it was a great deal). I’ve loved the car for 20 years now.

One day, there was a friend of mine that told me about some old car that looked like my Mustang and it was for sale. Always looking for another cool Mustang (in my dreams to have 2), I went to check out the car. It was a 1967 Cougar listed as a “1963 Mercury For Sale”. I knew instantly it was not a '63, but didn’t care. The guy selling it told me he was paid with this car in trade for work so he needed to get his money back from it. We negotiated for a month or so and settled on $2100. I got the car home and started going through things and checking out the car that I’ve seen specs for in my Mustang shop manual for the past 20 years and realized how much these had in common.

Then…a flashback appeared in my head!! When I was a kid, THAT was the car that I saw that made the first impression on me. I wound up selling off that car because I needed some money, and then shortly after that, I got some financials cleared up and was in my buddies shop when someone complimented me about my '67 Mustang. He told me about his neighbor having a Cougar that was sitting in the garage and the husband passed away. I jokingly said can you give her my number and have her call me if she is interested in selling it. He said, I’ll do better than that, I’ll call her now. To sum things up, as of now, I have my '67 Cougar XR7 Dan Gurney Special for just over a year. I get more compliments on the Cougar than the Mustang but I love them both the same, but for the different feel and different rides that they provide. BTW, I’m the second owner on both, they both are black with maroon interior, and bets of all the Cougar is was one day behind production and released on the same day as my daughter’s birthday. She memorized that the car is a “Black Onyx 1967 Mercury Cougar XR7 Dan Gurney Special Edition Car of the Year”, and can say it faster than anyone! lol (she’s 9)

Anyone know of a good body & paint guy in the Vegas area?

I’d go with the Cougar first. It’s a better looking car and most everyone has seen or owned a Mustang. You’ll turn heads with both for sure but I’d bet the Cougar will draw more interest when you’re on the road. Just my thoughts.
Steven

I’d make it a point to drive them both. It’s pretty nice to have one of each. We did that for a while. The '68 XR-7 convertible (CatVert) was mine and the '65 Mustang A-code, 4-speed convertible was for my wife. We sold the Mustang when we bought our business and now we each have a Cougar.

1967 Mustangs are good for use as parts cars for your Cougar. Once you have all the stuff you need then you can sell the leftovers on eBay easily.

1967 Mustangs are good for use as parts cars for your Cougar. Once you have all the stuff you need then you can sell the leftovers on eBay easily.

Priceless! How many time has a Cougar been a parts car for a Mustang restoration. Turn about is fair play.
Steven

You guys are funny. Turn a perfectly good Stang into a parts car? I think not.

I’ve been alternating between the 2 cars except more recently replaced the cowl vent on the Stang. Does anyone know if the Cowl Vent on a Cougar has the same issues as the Mustang (raw metal that was never painted)?

I guess this happens to other cougar members, but EVERY time I have filled up for gas, I ALWAYS have at least one person admire the car from thumbs up to conversation. 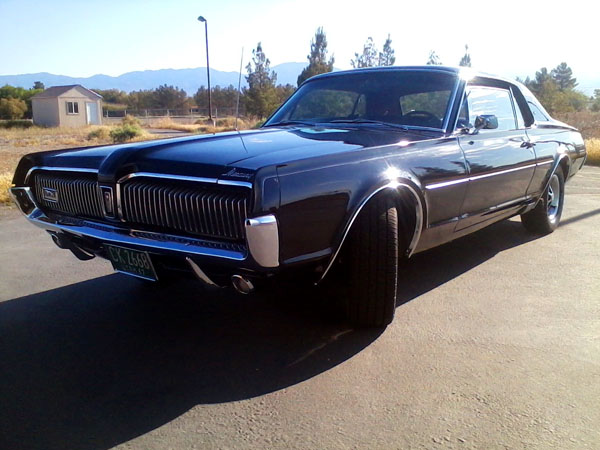 Yes cowl leaks are very common on first generation Cougars. Easily tested by pouring water down the cowl vent and watching to see if it drips inside the car.
Steven

The experience you have working on one will translate mostly smoothly for the other one.

A nice hidden benefit of the cougar is that insurance companies don’t consider it a “high risk performance car” like the mustang.

Your payments will be much lower, one of the reasons I settled on a cougar instead of a mustang aside from uniqueness.