The good:
It is a convertible, and it is a big block. It starts, idles, runs, steers and stops very well. It has power steering, power front disk brakes, and factory air. It has a console (the lid’s been repaired). The white interior had black inserts sewn in a long while back, and the entire interior has now been dyed black (seats, door panels and rear panels). It’s a great driver and a lot of fun. It has vintage cherry bomb mufflers, which I’m convinced must have been installed in the 70’s or 80’s. They sound fantastic, with rumbles and pops on throttle lift… kind of a fun game in and of itself! The paint’s now presentable after some polishing and waxing. The top goes up and down (the system needs bleeding, I think, as the lines gurgle with air bubbles, and the top needs a slight push form the interior to get it started to put it down - and a minor pull to get it started on the way up). The boot is in great shape (may be aftermarket). Wheels are original steel, with XR7 wheel covers. Tires are new Cooper Cobras with less than 100 miles on them (Firestone Firehawks from 1982 were dry-rotted). Rim blow repaired, and now honks from most “squeeze points”. The prior owner, who owned it for 15 years said the motor was rebuilt at 100,000 miles, and he had the brakes re-done in 2015 when the trans cooler line was repaired. He’s trying to locate his folder or past receipts for me as I pull together the history on this relatively rare cat. Deluxe Marti report included.

The bad:
The car is NOT rust free, but the underneath is solid. I’d comment on the torque boxes and things like that, but I’m not an expert. I do know it looks solid and original, and I have a video I can share. The prior owner was trying to rust it from the inside out in the driver’s side floor thanks to the poor tarp job and Chicago springs and winters, I’m sure. That driver’s side hole was patched with stainless steel followed by rust inhibitor (photos available; full disclosure’s a very good thing). It’s now solid and structurally sound, but welding in floors like a big boy is the right way to do this if the car is to more than driver quality. The driver’s side rear was also “retaining water” and had a small hole in theback outside corner wher ethe moisture settled, I believe. Same thing here; a patch panel (4"-5"x 3") and rust inhibitor. Otherwise, the passenger side had some surface rust in front and and a very small rust hole in back. The original tar soundproofing was still in tact when I took out the carpet and began the rescue effort. ** Note: Do not store your Cougar outside in Chicago, and if you do, do not use a tarp. If you still need to store your Cougar outside in Chicago, DO NOT use the same tarp for 8+ years… There is rust and holes in the bottom of the lower quarters, and the lower back edge of both doors have rust and have separated. Photos show the degree to which this is present. The trunk lid has some rust underneath the rear lower lip, but otherwise is solid.

Black convertible was nice in it’s day - it’s an upgraded material. It now has several rips at the rear window, and I removed the rear plastic window as it was fogged and dry-rotted. Turn signals do not work. Brake lights do, as do hazards, which leads me to believe it is the turn signal switch(?). Sequential flasher relay under dash has been replaced with the Cougars Unlimited version, but I - or the new owner - may still need to speak with Vic at Cougars Unlimited for some more guidance, or to buy his sequential box upgrade.

There’s a minor exhaust leak at the passenger’s side exhaust manifold, which the muffler shop believes may be a crack in the exhaust manifold. They replaced the manifold to down-tube collector, yet there is still a modest sound from that area. It conflicts slightly with the melodic Cherry Bomb tones, but in no way drowns them out.

Car is now again being garage-kept, 30 min west of Chicago. Contact me at gregoryejones@msn.com or by cell at six three zero, 913-3512 for more details.

I have only owned this car a short while, and it’s been a bit of a rescue mission for me. I considered buying this specific car 8 years ago as I looked for a '69 Convertible to re-capture my youth, as I owned a few Cougars in high school and post-college (a '69 XR7, a '70, and a brief trist with a big cat; a '72 convertible). When I first saw this car 8 years ago, it was parked under a tarp outside a home in the western suburbs of Chicago. It had a broken trans cooler line, and the owner said the car ran, but he couldn’t start it because of the broken line. It was too much of a project for me at the time, and I took a pass. We ended up with a '69 XR7 351 4v Convert, which we still own and enjoy today.

Fast forward to earlier this year. I came across the car - again for sale, and this time it was running. Saw it, drove it, and bought it. It was neglected, and needed attention. Carpet and interior had seen better days, and paint was heavily oxidized. The same tarp was being used to “cover” it now as had been when I saw it 8 years prior, and it was clearly not being driven much. This big block convertible was being neglected. Therein lies the rescue mission: Save this cat from further decay, sort it out, and bring it back to a respectable level for the next caretaker to enjoy as a driver, or pass it along to someone who wants to return it to it’s prior glory when it rolled off the Glendale, AZ dealer’s lot. Originally yellow, with a white top and white vinyl decor interior with nugget gold interior components, I’m sure it was a head-turner. 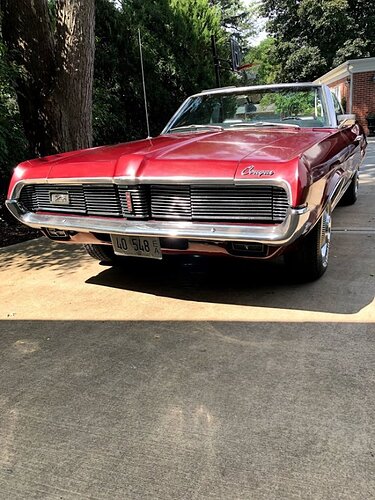 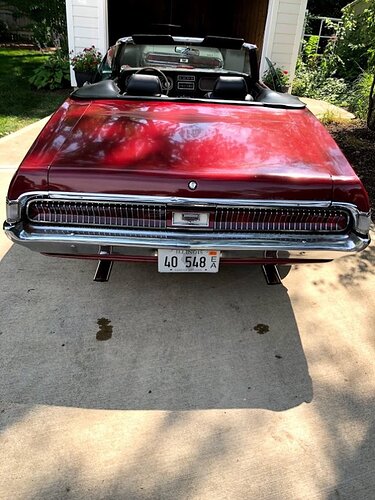 Wife says car needs to go before winter, yet teen-age son says he’ll restore it with me if we keep it… Will post links to a few videos tonight of a cold start and a summer joy ride later tonight.

Friends at Kevin Marti’s operation tell me that the order date on the Marti Report for this car of 10/30/67 is far too early for the '69 convertible. The model wasn’t even introduced / unveiled at that time, and they would not be taking orders. Said it was a typo @ Ford / Mercury. So the mystery will continue unless or until we dig up some more history. I may have to track the car back to who owned it and belonged to the Balboa Bay Club in Newport Beach, CA. The windshield sticker, for member #398, is still affixed to the windshield, likely from the 70’s or early 80’s.

Enjoy the snap crackle and pop of those cherry bomb mufflers!

Revising the price to $11,500 on this forum, Don’s WCCC for sale site, and on the CCOA classifieds. Trying to keep this well-optioned, big block Cougar in the community in lieu of someone further mishandling it. I’ll honor the $11,500 if you just mention one of these forums. Craigslist and Hemmings postings will remain at $12k.

$10,500 buys someone a solid, well-optioned, big block,rag-top Cougar which runs and drives very well. See it, drive it (or have someone else come to see and drive it here in IL), and you’ll see and hear the value in this cat. She’s well worth bringing back to her glory.

Also, so all board members know I’m not out here playing games, an unauthorized person has posted my car for sale on e-Bay and at least one other site for $20,000. It’s listed with all kinds of wrong information (Not and XR7, It has 125,500 miles, not 90,000, YES there’s bondo, and there’s rust as previously disclosed, etc. etc.):

MY THANKS TO A FELLOW BY THE NAME OF RAY, WHOM I HAVE NEVER MET, FROM SPRINGFIELD, IL WHO ALERTED ME TO THE E-BAY POSTING THIS MORNING. I have alerted e-Bay of this nonsense, and they are working to take down the posting.

In the mind-set of “it takes a village”, and “don’t mess with the Cougar community”, I cordially invite each of you to send random inquiries to the clown who posted the listing without my knowledge or consent. Feel free to ask them lots of questions about “their” car (which I own), to tie up their time. I’d consider it a personal favor!

As a fellow 69 owner and IL resident, I would be happy to swing by Greg’s house to see this car for any interested buyers and provide my honest opinion on everything - unbiased and impartial. Just let me know.

Sold to a local party in IL. One more Cougar saved from a part-out!

New owner intends to restore this back to its original “W” / yellow color code with white top and white interior.

Thanks for all who expressed interest.

Potential buyers beware: This 390 convertible is now up for sale - again - on e-Bay.

The fellow who bought this car from me in October IL said he was buying it to restore for his friend’s uncle, and that he intended to restore this back to its original “W” / yellow color code with white top and white interior. That was a good story line, but it was false. He immediately listed it on e-Bay (his prerogative in our capitalist society), but made several misrepresentations about the condition of the car. It sold for an undisclosed price outside the auction. The car is now being re-listed, apparently by a different seller (user ID) apparently in Rhode Island. The car now has a new convertible top which looks good, though is still sporting the same IL antique plates it had on it during the first auction. Perhaps just old photos.

If you’re considering this car at roughly 3x the final asking price in October, I’d point you to prior photo links within this thread. They provide a full disclosure view of the condition of the car up until October when I sold it, including the rust-through on the floor boards, the temporary sheet metal patches I installed, rust-through in the lower rear quarter panels, and rust in the doors and trunk.

For clarity, the current seller is silent about rust or other shortcomings of the car, so I take no issue with the current listing. The prior listing by the IL seller, however, was inaccurate and misleading in several respects, and represented several things having been done to the car by the prior owner (…that would be ME), which were not factual. That original auction should not be used as a guide for the true condition of this car.

“Caveat emptor”, and best of luck on your Cougar hunt!