On my 1968 XR7-G with an S code 390, I am having trouble getting the air cleaner to seal over the carburetor. I installed the same style carb that was original to the car (Holley 4150) and the air cleaner doesn’t clear the front float adjusting screw on the top of the carb. The base has a dimple to clear the float adjusting screw on the back of the carb, but not the front.

What am I doing wrong? Do I have the wrong air cleaner base?

The S code air cleaner base for '68 has a round vacuum operated air valve that opens on acceleration, bypassing the snorkel to let in more air to the filter. It is unique, only the 1968 S code Mustang / Cougar used this.

Does yours have that on the driver side?

Yes, it does. Even though it isn’t hooked up. Use a thicker air cleaner gasket or two.

Looks correct - the hole in the side of the air cleaner base is round, not square, right? Perogie rebuilds the vacuum motors, so does SEMO mustang.

I am not sure about the shape of the hole. I assume it is the right one since everything else on the car has been right so far. I will check it out.

I will probably try getting some extra thick gaskets and try to get it to seal.

Your chrome lid isn’t correct Matt. It should be this style. painted on Hertz cars and chrome on others. 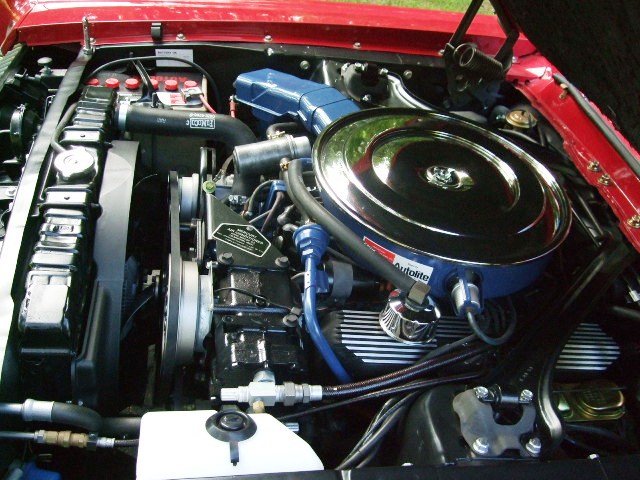 The description describes your issue: “This spacer/gasket ensures proper clearance between the carb float adjuster and the air cleaner base.”

Damn. It is a square door.

I understand that isn’t original, but that shouldn’t affect fitment should it?

I was looking at WCCC and the bases are totally different. That explains the fitment issues.

I wonder if I can trade for a correct 390 air cleaner. If I am looking at it right, this one is way more expensive than the 390 version.

Yes, it does. Even though it isn’t hooked up.

This one looks like the 1969 390 air cleaner. It is nearly the same as a 428CJ non ram air unit. and the 69 Boss 302 non ram air unit. Thew snorkel is the area of deference between the applications. This unit is also expensive, so it could net you a correct unit.

No, the '69 Boss and CJ cars used a Holley carb too, so it ought to fit just the same. The snorkel is different, and used a different S tube, so the S tube probably won’t fit properly.

That is what I thought. Maybe a new gasket will work for now…

No, the '69 Boss and CJ cars used a Holley carb too, so it ought to fit just the same. The snorkel is different, and used a different S tube, so the S tube probably won’t fit properly.