Hello everyone! I have two headlamp switches that are new, purchased about 10 years ago from John’s Cougar Parts. Neither has been installed, and both remain in the clear plastic bag John’s shipped them in. They are of course for the vacumm headlamp doors but were not shipped to me by John’s in NOS boxes, so we’ll call 'em aftermarket switches.

I’ll give one of these to each of the first two persons to email me and cover freight from S. CA. I won’t charge you over $20 for freight to anywhere in the continental US, - except - Alaska or Hawaii would be more. I don’t want to make money on them, rather, …I want to see them in use in someone’s cool car! Again, the criteria is the first two emails I receive. We’ll go by the time stamp. No warranty is implied. These are “as is.”

What are the circumstances behind me having two of these switches? Well, the headlamp door system on my 67 was getting lazy and the driver’s side door finally quit closing or opening at all. So, I thought since I was going to fix the issue (again…), I’d go through everything in the system and get a backup switch while I was at at it. After all, how long will these switches be around? So I ordered two of them from John’s. I got about halfway through the project when the electric system kits were advertised for sale, so I put in the 84 Ford Probe doors kit. Threw away all of those mickey mouse vacuum cans, hoses, connectors and the bellows. Actually, I gave the bellows to someone to “rebuild.” Although really a cool car, my car is what enthusiasts call a “Driver” (as well as a restomod) and I don’t need to keep it bone stock so those electric doors have been a good modification to keep me on the road and able to drive at night.

You can benefit from my change of mind! What you’ll get is one switch and the little instruction sheet that John’s Classic Cougars sent me. This should in no way reflect negatively on John’s - I’ve bought lots of stuff from both him and Don Rush and those guys will always be tops in my book. 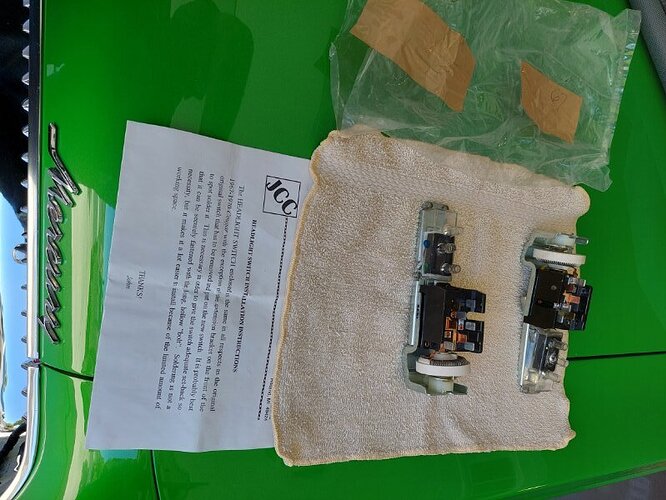 Those are actually '68 switches.

That Green color sure looks nice!

Curious why did this change? What was the reason behind it?

The '68 system is simpler and eliminates under hood wiring and hoses. It’s cheaper.

Coolcat: Thanks for the nice words. I’ll see if I can figure out how to post the pictures in the appropriate thread. I’m 'kinda new to the site so might take a day or two.

Randy has a point here. The switch I had may have been changed out by the previous owner. Some people were replacing the 67 switches with the 68 switches back in the day.

Those are actually '68 switches.