In '69 a new Cougar Eliminator was part of the prize package for the winner of the Super Stock Nationals Stock class. The winner: Frank Iaconio of Totawa NJ with a 57 Chevy Fuelie car.
It’s a big multi-page feature of coverage including pics in the 11/69 issue of Super Stock mag, but I’ve scanned the most Cougar-centric parts. Alas the first page was partly cut off somehow, but at least I saved the image of Iaconio in the winner’s ceremony with the '69 Cat all painted up and posed for the cameras.
Nicholson in the second page, and Schartman in the third image (far lane).

Here are a couple of apropos scans from some of my Drag Times newspapers. 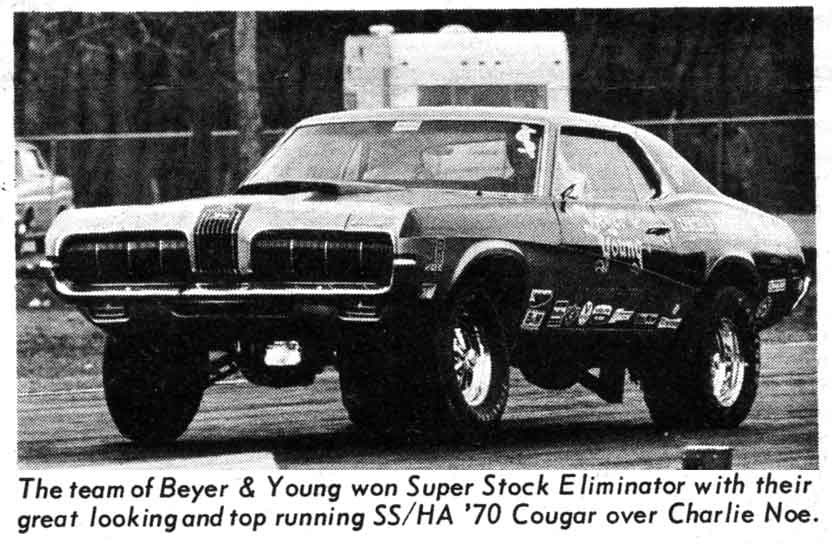 That 70 looks pretty beefy. Wonder what happened to that one?

Is it just a trick of the light or does the give-away Eliminator have an XR-7 style chrome base on the sport mirror? I’ve never seen a '69 Eliminator with anything but a full body-color outside mirror.

looks like a chrome base to me, peering closely through a magnifier at the actual mag page.

Here’s another article and picture about the Air Lift give-away Eliminator, this one from the Oct. '69 edition of Hot Rod:

I knew I had this somewhere, but it took a while to find it. Unfortunately, I can’t really make out the mirror base from this angle, even in the original magazine picture.

Interesting that the Air Lift lettering on the rear quarter panel is completely different than shown in the previous article.

Missing some of the door lettering from the first article, as well.

Bet that was a pre-race press kit photo in HRM direct from Mercury.