I have a an original Tecumseh HG1000 compressor that just went kaput. Yesterday it started hissing behind the clutch pulley and today there was a small pool of lubricant under it. So doing a little research it looks like the York style compressors are readily available but nothing I could find for the Tecumseh. I ordered a new seal kit for mine but am unsure if that was the best decision.
My question to members here is are the brackets and bolts as currently set up on my 68 the same as would have been used on a York unit? Were both dimensionally identical? I’m leaning toward replacing mine with a York but before I order one I want to be sure all the bracketry will work along with the clutch pulley. Here is a pic of the top of my A/C and bracket: 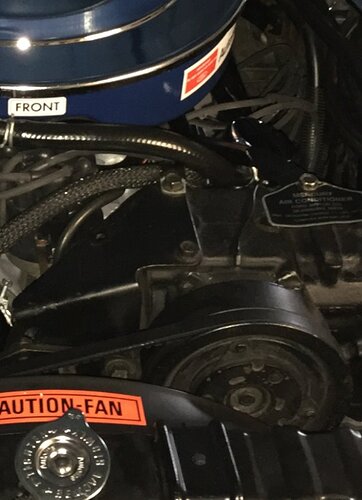 Google is your friend. I find they are available anywhere air conditioner replacement parts are sold. Example:
http://www.mustangsunlimited.com/Mustang/Heating-Cooling/A-47-C-Compressors-Related/A-47-C-Compressors/Remanufactured-Air-Conditioning-Compressor-Tecumseh-Style-1965-1966-Mustang.axd

Google is your friend. I find they are available anywhere air conditioner replacement parts are sold. Example:
http://www.mustangsunlimited.com/Mustang/Heating-Cooling/A-47-C-Compressors-Related/A-47-C-Compressors/Remanufactured-Air-Conditioning-Compressor-Tecumseh-Style-1965-1966-Mustang.axd

Royce, I went to several sites including MU, my mistake was putting in my year, make, and model and then only York units came up in my search. I guess I should have done as you suggested and Googled first. Thanks for putting me on the right path. On a side note, the sequence of bolt(s) removal, disconnecting the power steering, brackets all to get to that last bolt underneath the compressor was a chore no Ford engineer who designed it ever had to do!

You can get a York rebuilt from most auto parts stores. York will save you 10 pounds of weight and is interchanged with the Tecumseh.