Can I paint my wheels and make em look like this?

Here’s an XR7 on eBay right now with rims that look awesome to me.

They look like what I hoped to make my rims look like by painting them. Does that work?

If I masked off the outer two rings, and left the ring with the rivets on inward exposed, and hit em with a rattle can of gloss black…

First off can I even paint my rims with a rattle can and have it work and look ok? And second, if I do, gloss black or matte black with a protective glossy clear coat?

I did something similar with my DGS. I had a set of pretty ratty '69 styled steel wheels. I took out the inserts (kept them of course), had the rims media blasted then I rattle canned them with matte black.

They have since been brought back to their original appearance and are back on a '69 where they belong.

Anyway, your wheels have an awful lot of flat surface area and are made of a different material. I would think they would scratch up pretty quick. 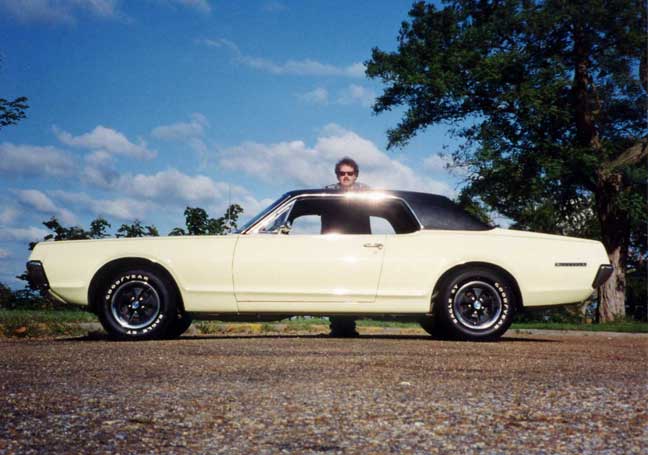 You would need to prep them as well as you would a car body if you want the paint to stick over the long haul. I also suggest using etching primer which can also be found in spray cans at body shop suppliers.

IMO, it will be very tricky to get a gloss finish that looks great. Painting anything black is always the trickiest. I’d do the semi gloss finish if I was going to be doing it. Look for SEM “Trim Paint.”

Leave the center caps and the lug nuts shiny

^^^ yes, forgot to mention that I used an etching primer.

Ok, scotchbrite pads and a bunch of blue painter’s masking tape in my possession at this point, and plan of attack changed to matte black. I did a super cheap photoshop (not even photoshop, Microsoft paint!) to see how it would look and it looks freakin awesome.

And hell yeah, lug nuts and spinners won’t be painted. Just the rims from the second ring inward. Flat black, not glossy. Similar to the color of the tires.

I was just gonna say get em powder coated it will last longer and look a lot better in the long run.

Are we talking all four rims for like $50 or less? And can they do a real good clean line separating the powder coated part from the part that will be left as-is, aluminum-looking? I’m gonna upload the cheap “photoshop” job I did so you can see the A/B comparison. I keep flipping between the two pics, and while I love the way my Cougar looks now, with the rims done it’s just night and day for me, makes her look absolutely perfect. Kinda shocking me how excited I am for such a minor cosmetic change.


Edit: I just thought about it some more and I’m pretty sure I don’t wanna go down the powder coat road even if it’s only $50 for all four wheels which I bet it isn’t. It would also involve taking all the tires off the rims and putting them back on, and I don’t have access to a tire machine to do it properly. Or balance them once back together either. I have a feeling that going the powder coat route is gonna end up costing a lot more than I can spend. Is it really that big of a difference in quality from what I can get with paint?

It’s not exactly right because the lug nuts wouldn’t be blackened, but I threw this together in like 3 minutes and MS Paint is pretty bad for this kinda thing anyway. But it gets the point across, which is that my cat will look crazy awesome even more than she does now.

Here’s a thought that hasn’t been thrown out there…they are aluminum wheels, yes? How about getting them anodized black? I don’t know if they could keep that off the outer rings, though…maybe some kind of protectant during the process…

Would take dismounting the tires, and probably be more $$, but…man, that’d be killer, IMO.

Anodizing or powder coating both have the same drawbacks, price and complexity. Anodizing can’t be done with a sharp line like these rims will have, I’m nearly positive of that. I’m open to correction but am pretty sure even powder coating can’t. This same subject came up when I was designing my last instrument, an all-aluminum baritone guitar, and my buddy who makes em told me you don’t get sharp, clear lines of on/off sorta nature with anodizing or powder coating, if I remember correctly, that there would be bleed. That’s where paint seems the way to go. Plus the cost and complexity.

Ultimately I have rims that I’ve never been happy with, and am looking to make them look much better to myself, without spending hardly any $ at all. This is a purely cosmetic endeavor, and I am the type of person who just cannot justify putting anything more than a couple meals worth of cash into something purely cosmetic when there are mechanical/performance issues to tend to.

Bummer. Pity, as that would have looked way cool.

And thats what really counts now doesnt it…

That’s the way I looked at it before shooting my car…best case, it turns out good…worst case, I get to strip it again!

I look forward to seeing your results!

Went to NAPA today and picked up a rattle can of etching primer and a rattle can of satin black paint that is specifically billed as being for doing wheels. Total cost $17.

I cut open an empty A&W can (my go-to beverage), hit a small section of the interior with a scotchbrite pad, and sprayed it with 2 coats of the primer. In about 15 mins I’ll go back (cause it will have been a half hour) and hit it again with the scotchbrite and then go for a test run of the actual paint. I wanna make sure it doesn’t look too glossy. And once it dries, I’m gonna take the can and rake it around on a pile of rocks in my back yard and see how it fares.

If all that goes well, then I’ll get to taking off the wheels and scotchin’ em up and masking em tonight, probably start painting tomorrow maybe? They just updated our forecast, now calls for t-storms from today until Monday. So I’ll be looking for periods where the humidity is below 60% to do the painting, since that’s what it calls for on the can.

Yeah humidity is a killer on paint. Any time I’ve tried painting anything with a rattle can when it was humid, it would come out looking satin whether I wanted it to or not.

So here are the results of today’s test.

Primed and painted this soda can, dried for a few hours. Instructions say it’s dry in one hour and okay to handle after 3. And it takes a week to cure.

Then I put it on the ground and whipped a handful of rocks at it as hard as I could, which didn’t chip the paint so much as it made holes in the can. Then I took it and put it face down on a bed of rocks and pushed down hard and scraped it back and forth.

Here’s what I got.

I think it’ll be fine. Look really nice, for a while anyway. Then it’ll get scratched up and start to look ratty, which I can deal with. Maybe a year or two from now I’ll get the rims powder coated. My buddy did say that while you cannot make a sharp line with anodizing, any decent powder coat guy can do it. He also told me I can powder coat them myself in my oven at home, which I bet is right but I’m totally not gonna do.

Initial plan was to make a template to cut 60 pieces of tape of 11/16" diameter circles to mask the rivets so they aren’t painted, but then when I popped the first wheel off I realized they’re just held on from the reverse side with nuts, so I removed all 15 rivets from the first wheel.

They’re a little dirty, slightly rusty in spots. I’m thinking of doing the trick where you put something metal in some Coca Cola and let it sit for a day and then come back and it’s totally clean metal cause the acid ate away all the gunk. Thoughts on that? Something better to soak them in? Can’t beat Coca Cola for an acid bath, right?

First off, I don’t think your rims will see the abuse you threw at the can.

Second, other than size constraints, there’s no reason I can think of why you couldn’t try baking on powder in your oven…why not??? Read lot’s of forum threads on it. But, that is in the future!

I say, go for the paint, should hold up decent!

if your gonna use your oven, might want to relocate it to the garage or somewhere other than the house - its gonna stink from what I understood from talking to a local powder coating guy out by me when I was picking his brain.

I think I still have his info if you want it - he was reasonable in his priceing.