I have a 69 XR7 convertible in polar white. I like the color, but it is an awful lot of white too look at! I want to put some black stripes on it to break it up a bit but the stock-style Cougar stripes are very thin. I like the Eliminator style but I want it to go all the way to the back to the taillights.

When I thought about what muscle car stripes looked the coolest the first thing that popped into my head was 1970 Challenger. I think this would look totally badass on my Cat!

If I do this am I breaking any unwritten rule about car brand contamination?!

I did just see this on WCCC, this is pretty cool.

But I still think the Challenger ones are better!

I don’t think so. I have battled with this same dilemma on my build. I want to be true to the classic nature of the model, however I also have my tastes and desires for performance. There is a healthy balance in my mind. The paint scheme I have decided on is one that will infuriate some, and be totally bad-ass to others. It is nothing close to what came on any year Cougar, neither in scheme nor color. However, it fits into my realm of “healthy medium.” So find that healthy medium in your mind, and go with it. Some people may cry foul, but in the end it is your car, and paint is an easy proposition to change.


Sent from my iPad using Tapatalk

I did just see this on WCCC, this is pretty cool.

But I still think the Challenger ones are better!

Those are '70 Eliminator stripes. The '69 ones do not go as far back and sit lower. Yes, if you deviate, some people will cry foul indeed but as was said, it is your car!

P.S. Again, it is your car, but with your recent thoughts on the powertrain and now this, are you looking to create a “all show and no go” car?

Haha, yes! In that way it will be a lot like me; looks pretty good (age considered) but doesn’t have anywhere near the get-up-n-go that it did in its prime!

Besides, stripes are cheap and pretty easily reversible!

You could go with something like the '69 Cyclone side stripe for a custom look, that’s still within the Mercury “family.” 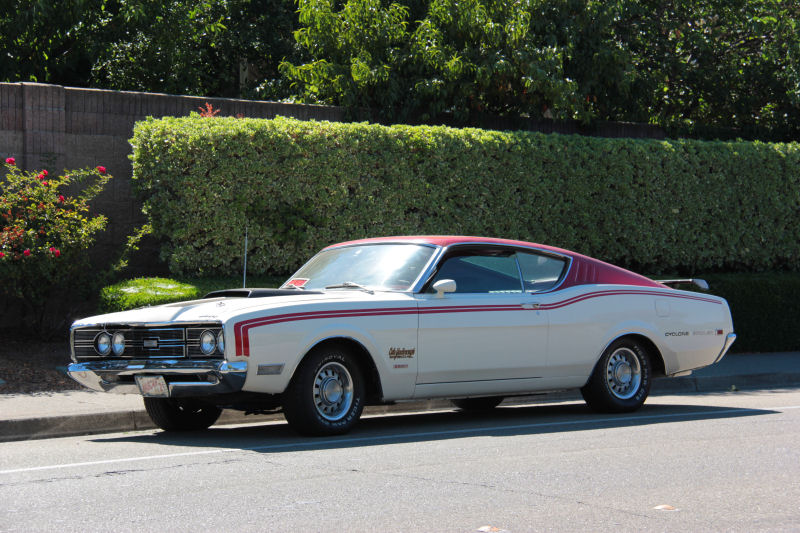 Wow CJ750, those are both nice looks!

I would go for dual pin stripes. Clean and simple.

If you want to go Mopar, use the flat black billboard stripes which cover most of the quarter panel. You could put the engine size at the front of the stripe like some of them had.

Hey S Code, that is pretty badass. It kinda reminds of the stripe on the Zebra-3 Torino, which is a cousin to the Cat at least!

It’s your car; do what you want with it just as long as you like it is all that matters.

Just to bring this thread back from the dead, I ended up putting the 1970 Eliminator stripes on the car. I know mine is a '69 and not and Eliminator but I like the way they look! Besides, with all of the other totally “incorrect” things about the car the stripes are of least concern!

My rear spoiler is black (instead of painted to match the body) so the sticker would not show up. I was going to leave it off but the trunk had far too much open white space so I did this:

My dad was a Michigan State Policeman and it remindes me of the decals on the trunks of the patrol cars.

I am very happy with the way it turned out, it breaks up all that white and ties the hood and trunk in with the sides of the car. It only took a couple hours to do, major bang for the buck.

Todd I think they turned out well. You’re happy so thats most important and you also stayed in the Mercury Cougar stripe family.
Steven