I was just thinking on Sunday why haven’t we seen more cougars in movies. Seems its always a mustang or chevelle.

Well if the trailer I just watched is true. Chris Hemsworth is in a movie called Spiderhead. Not sure but looks like some one is tearing up a dirt road in a yellow 70 Cougar.

Sadly looks like it doesn’t survive in the film but still cool to see it.

I slowed the trailer down ( as the real time speed only had the Cougar on screen for less than 2 seconds ) and was able to look at the front fender extension ( pointy ), headrests on the buckets, the rear marker light ( small with rounded chrome surround ) and the quarter window ( no weather strip + chrome support bar ) - it’s a 1969. Regardless, sad to see it ‘immolated’ !

From Dusk till Dawn is the only one I’ve seen one in.

Isn’t there one in " bad times at the El royale"?

I’ve several cougars in reruns of CHIPS, sadly they always seem to fly off a cliff:-(

Isn’t there one in " bad times at the El royale"?

My white 67 was used in a crime documentary on Netflix called, The Phantom. They never show much of it, though.

I seem to remember a pretty nice Cougar in The Graduate.

Here’s a still from the film, “Driving Miss Daisy” with a 1970 Cpugar pulling up to Miss Daisy’s house (sold) by her Chauffer’s daughter :

If you do a search there is at least one good post / thread about cougars in movies.

That Cougar in Spiderhead is shown quite a bit!!
I won’t offer more details that might ruin the plot for those who want to see the film.
It appears to be a standard ‘69 hardtop with eliminator stripes.

I’m hoping the crash was all CGI, not real damage.

Not a lot happens but there are many driving scenes with star Gary Lockwood (2001: A Space Odyssey and the second Star Trek pilot, among many other things) tooling around 1968 L.A. in his MG.

At least six or seven Mercury Cougars drive in and out of scenes - pretty much new cars at the time. Guess they sold well in that area. One gold one had either GT or 6.5 Litre badges on it.

As I said, not a lot happens plot-wise, but it is a great document of that area in that point in time.

In preparation for their roles in “Once Upon A Time In Hollywood” director Quentin Tarantino had the actors watch this. Also of note (to me at least and the main reason I have a copy of this movie) the musical score is by the band Spirit.

Well this isn’t exactly in the movies category. I’ve seen a lot of Cougars in the Rockford Files tv show. Here is a screen capture of a red ‘67 with a white top from the Case is Closed episode in season 1. 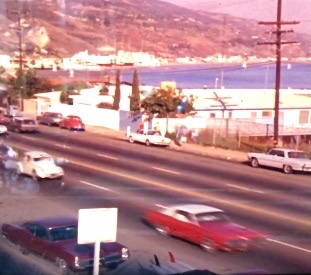 I lived in LA near Spahn Ranch in 1969, and the attention to detail in Once Upon a Time in Hollywood is amazing. They nailed it - from hippies on horses to cars and landmarks, right down to the Radio KHJ jingle. 2000 vintage cars in that movie including that beautiful red Mustang in Westwood, but no Cougars that I saw. I’ll definitely check out Model Shop!

That Cougar in Spiderhead is shown quite a bit!!
I won’t offer more details that might ruin the plot for those who want to see the film.
It appears to be a standard ‘69 hardtop with eliminator stripes.

They used 3 Cougars to make Spiderhead, 2 H code Automatics and my M code Eliminator, which they wanted with no ifs, buts or maybes. Long story to how that came about, which I might put in a separate post about the car, but I can confirm that the other 2 didn’t make it. Thankfully they were true to their word and the Eliminator came back better then when they received it.
Because the cars had to match, mine being in 3 shades of yellow meant they were all painted, based on the underside of my trunk lid for the colour match. One of the other cars had a vinyl roof, which the directors liked, so they all got vinyl roofs.
When the car came home it had a trunk full spares, and I also bought 2 sets of wheels at marked down prices from the production company. Also had the scoop and spoiler repainted in Yellow.
The pictures show the car as sent, on set and when it came home.
Eventually I’ll take put the correct stripes back on it and remove the vinyl roof, but for now I think it looks amazing. 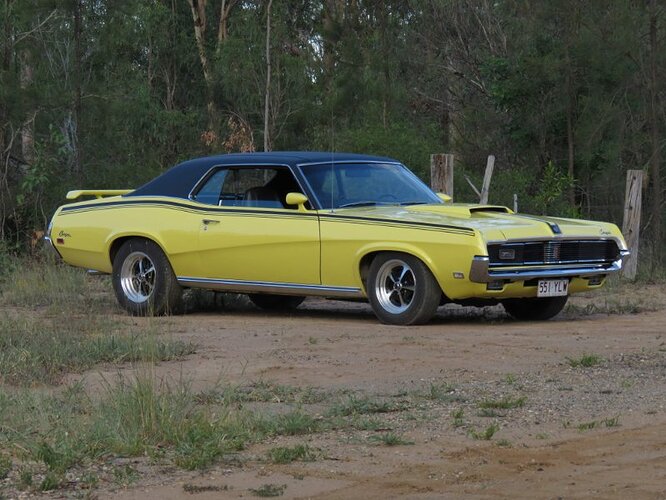 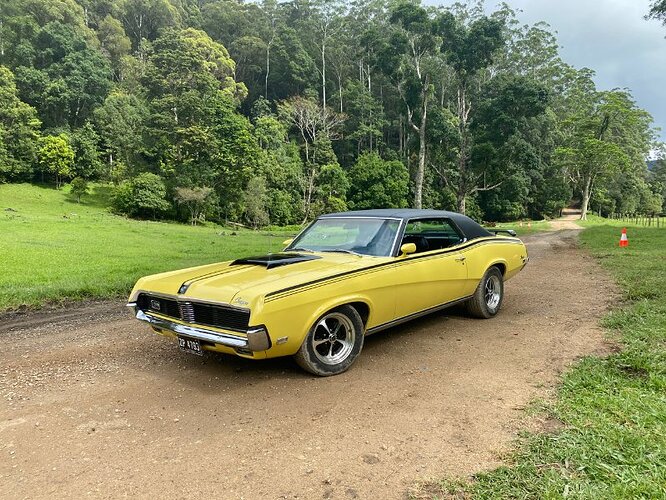 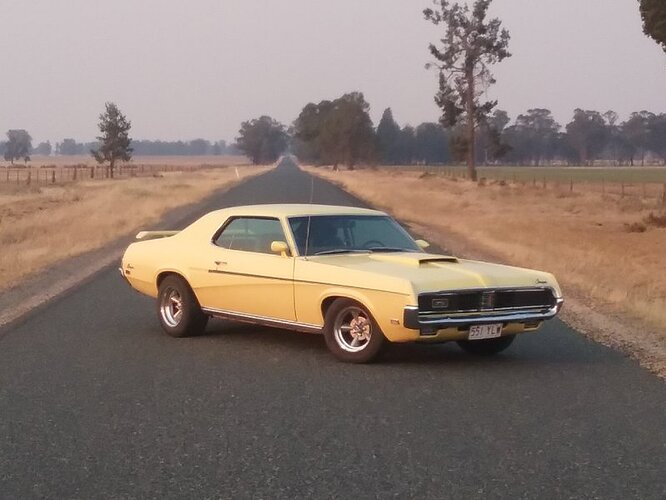 Of course you can’t change it now that it’s a movie star - lol! It does look really good that way. Cool story - thanks for sharing.