I started my thread in the main forum area though I think this is better placed here. For background I’m working on a 1969 base convertible that I bought from the PO in Utah in April 2016. Plan is a solid stable robust driver that can handle anything I ask of it from road trips to autocross to cruises to local car shows. Here is the build thread so far:

I’m now working on installing the TKO-600 and Kevko deep sump pan. I received some parts today though still need to determine clutch I’m going to use.

Alright all settled in here now.

I pulled the transmission after setting up my engine support. To do so I had to remove the hood and pull the valve covers which was OK as the fasteners were crappy and they always had strange oil seepage issues. More on that later. 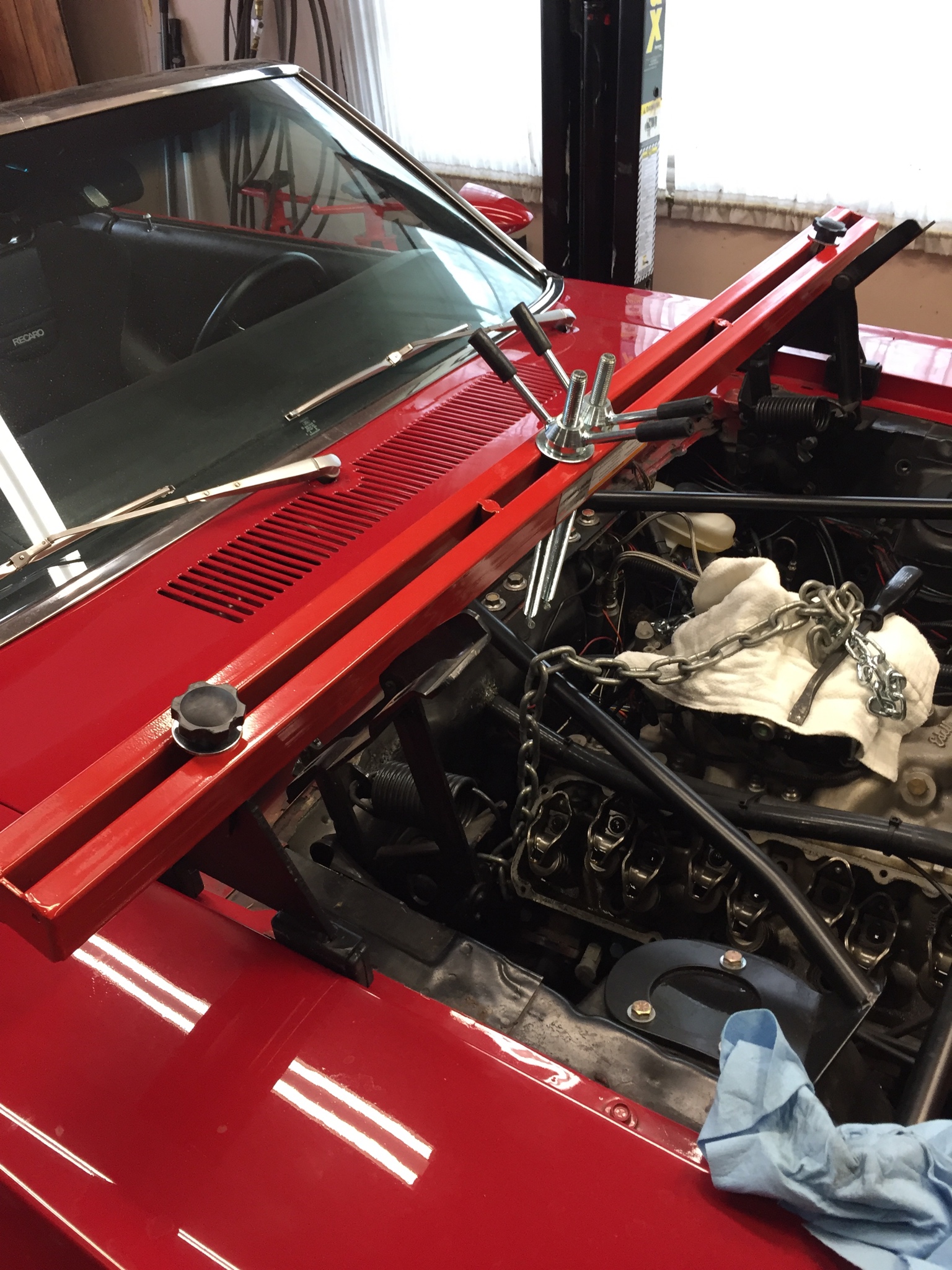 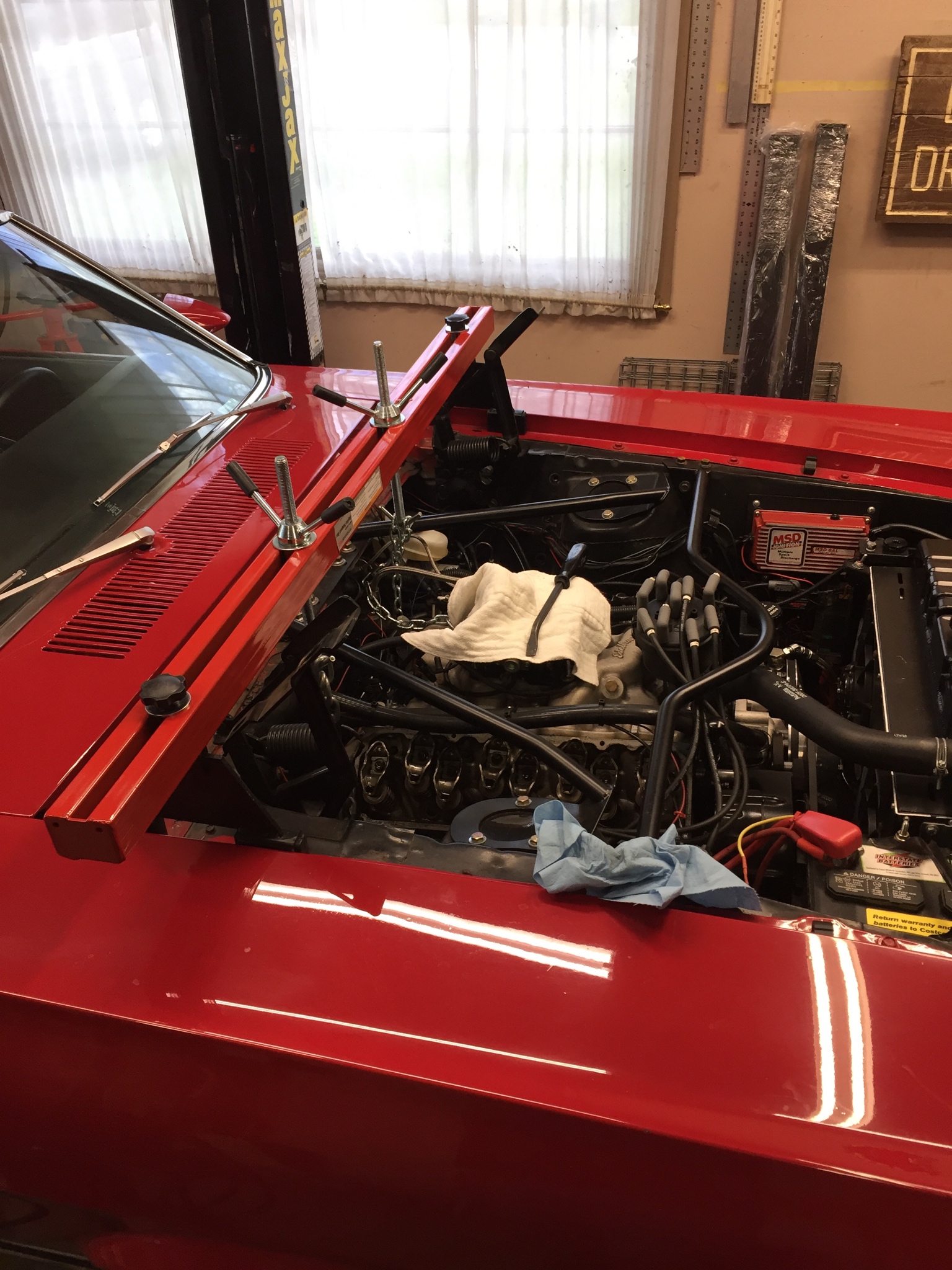 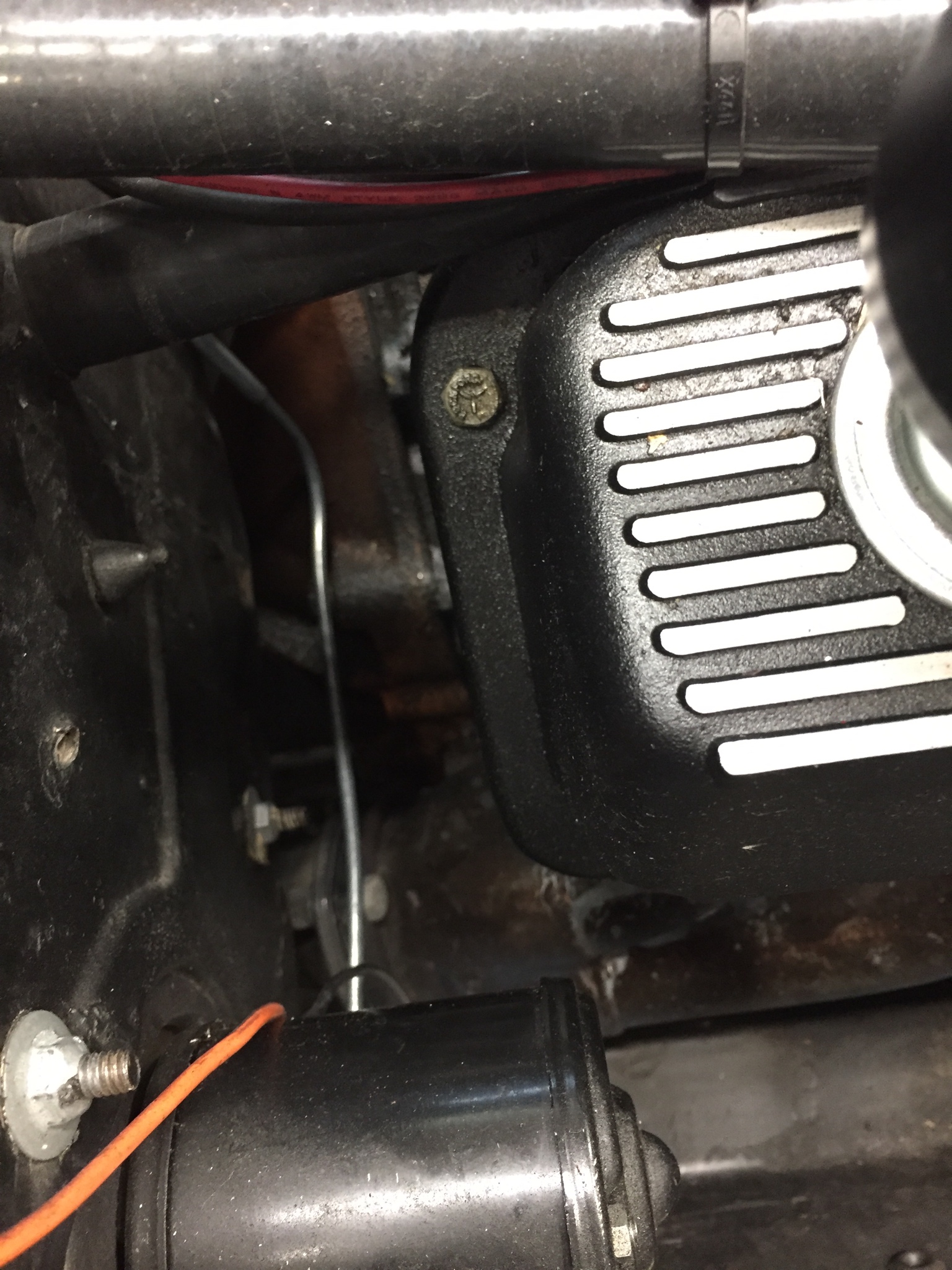 These fasteners were installed by the PO without washers. I’ve been looking for a better alternative and just found them at Speedway Motors.
I pulled the tail shaft housing to reduce the weight a bit 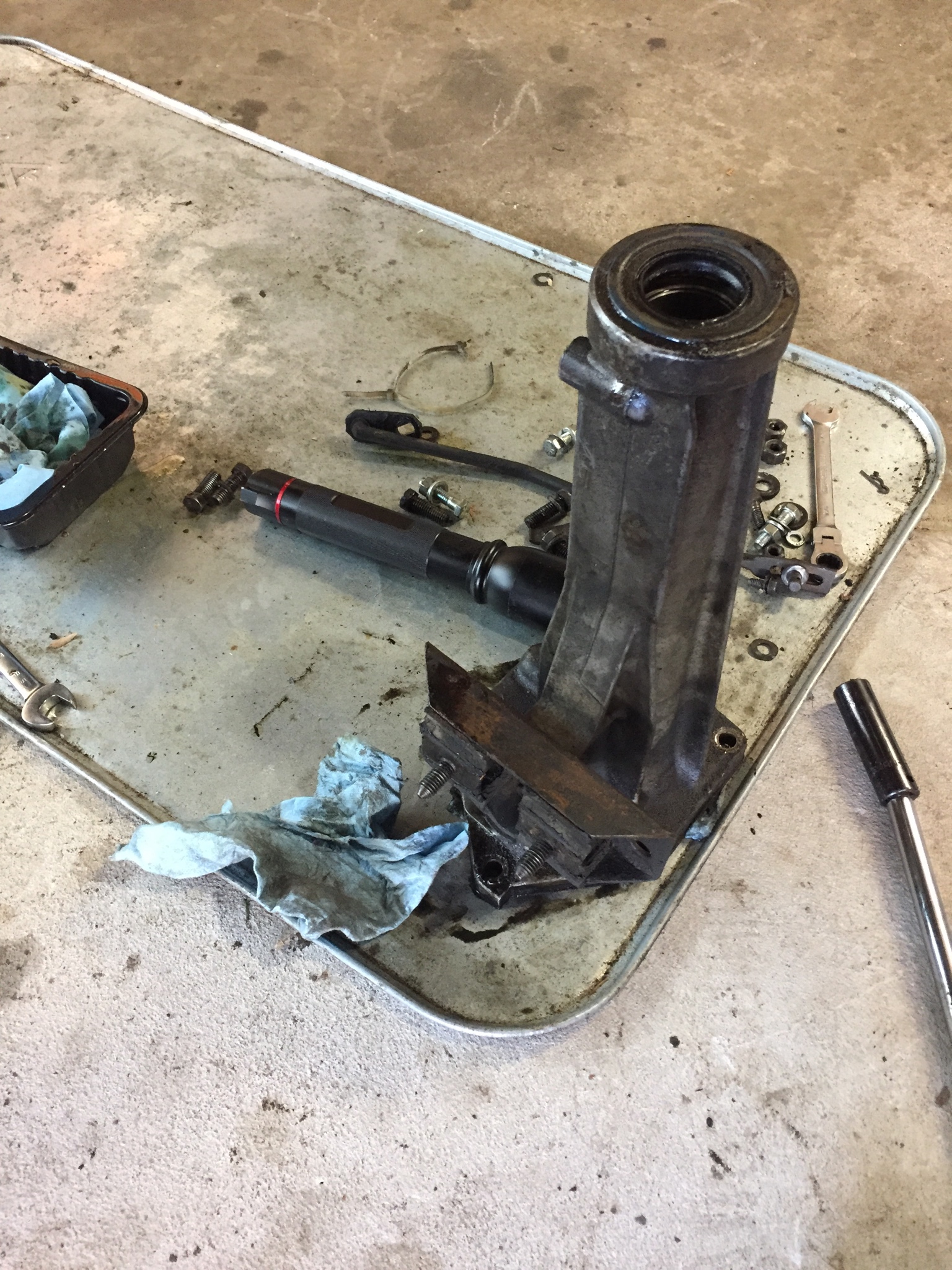 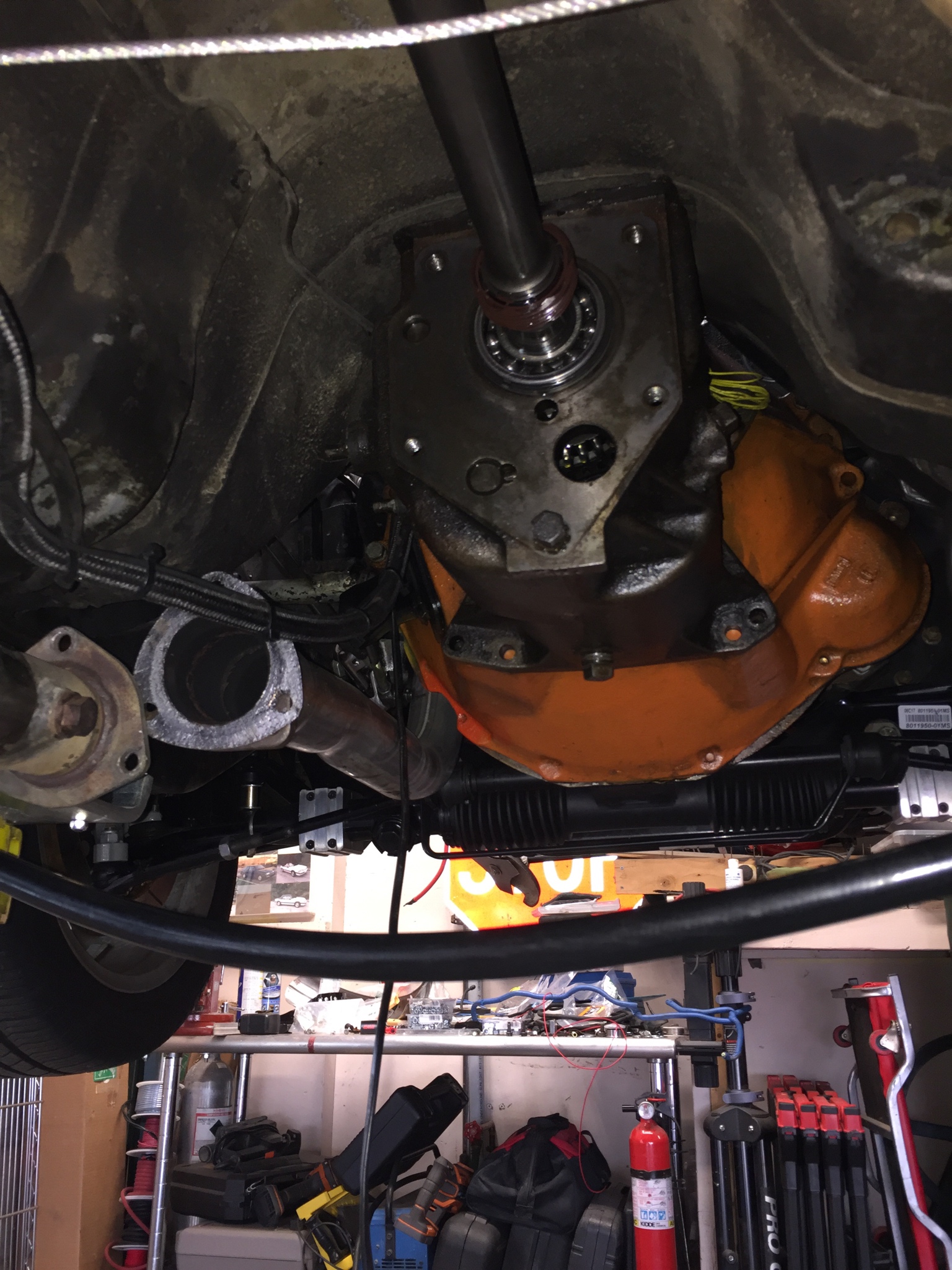 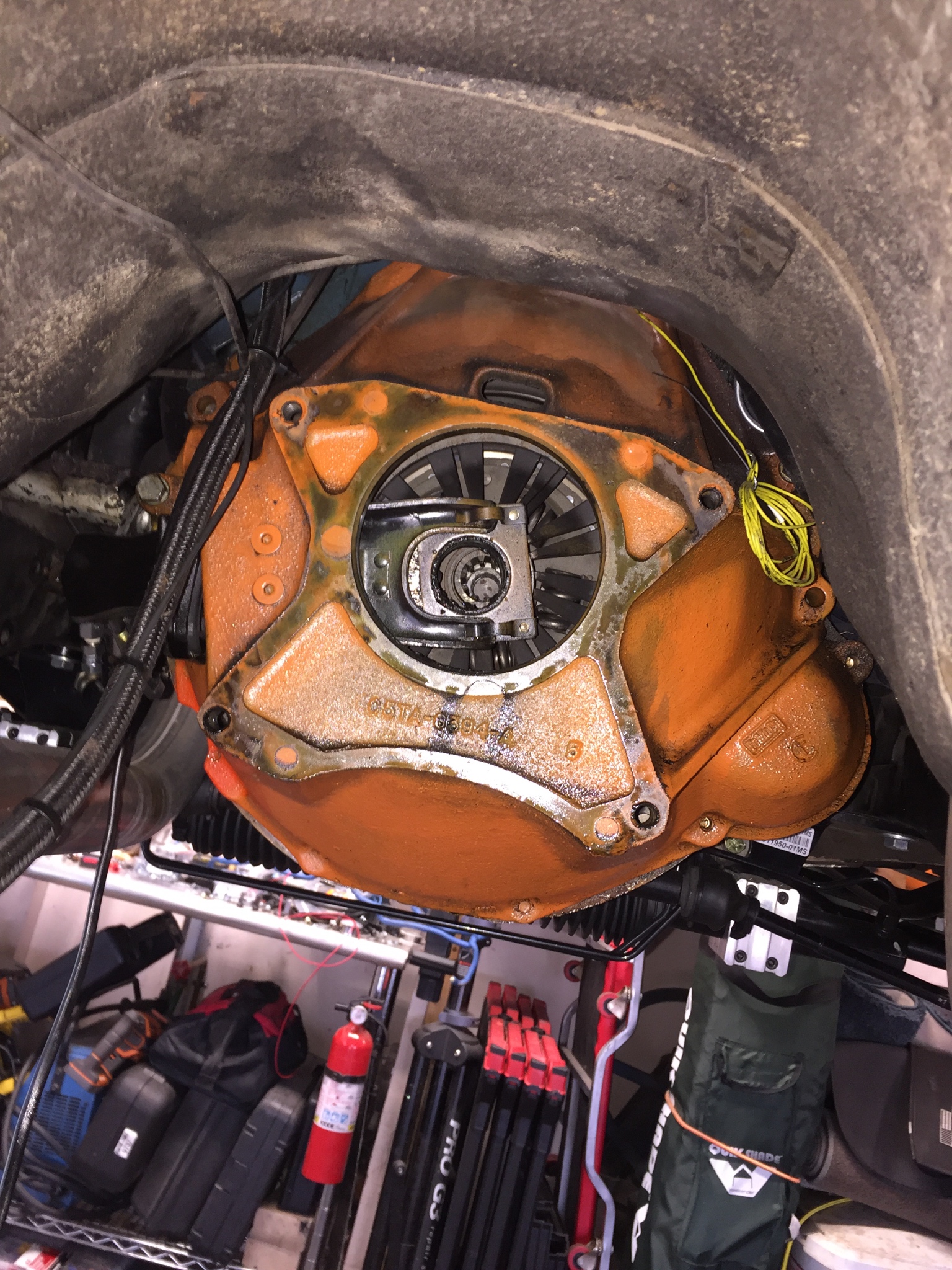 Now a no speed flying Cougar 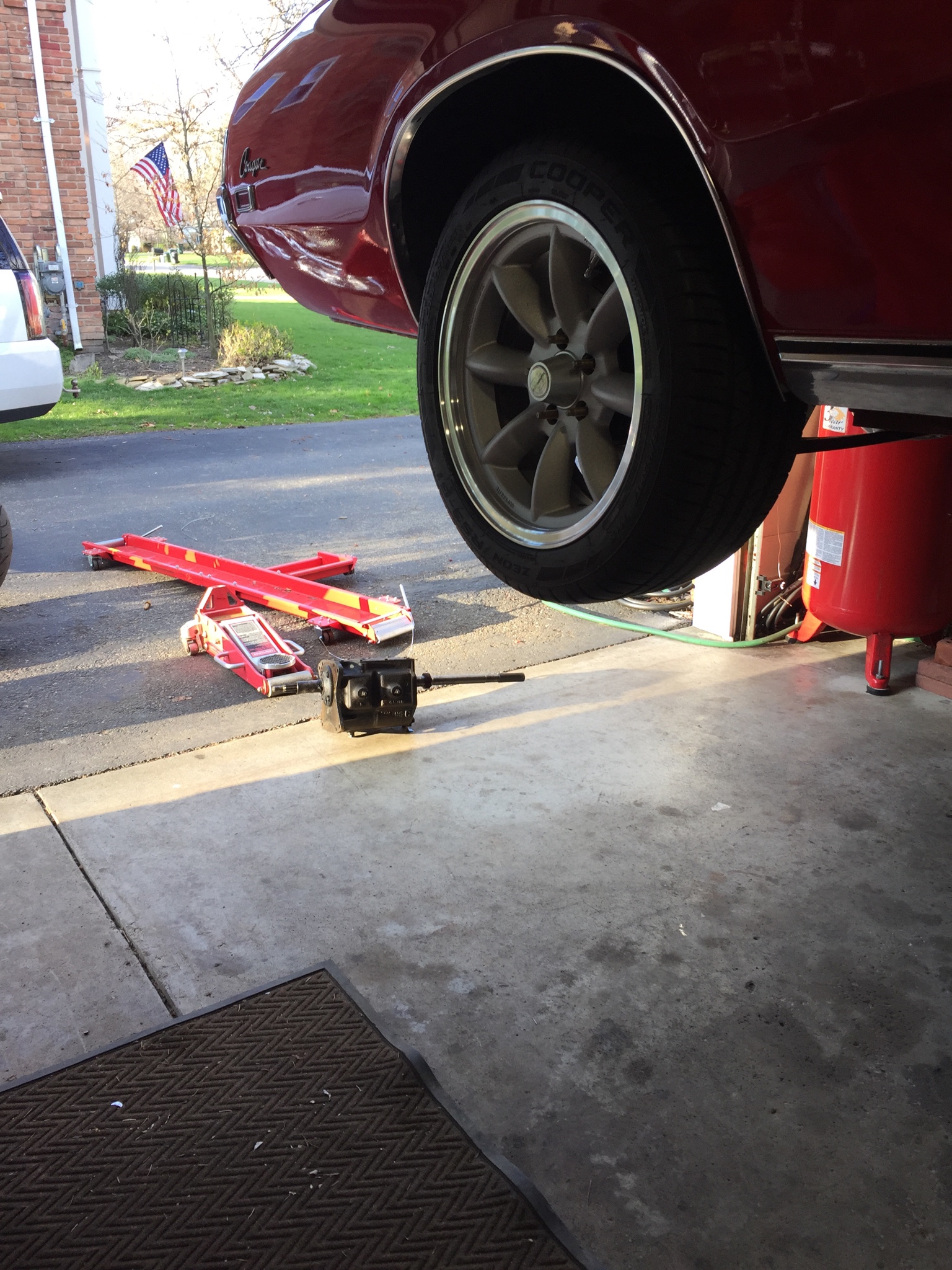 Tonight the starter and bell housing come out then the clutch.

The valve covers are cast aluminum with walking cat. They always had an oily surface around the cat which I thought was odd. When I removed the covers to prevent damage when supporting the back of the engine to pull the trans I saw that the chrome cats were attached via rivets through the covers. The cats had a slight rattle and the rivets heads were not mushroomed down very much hence my oil seepage. I scrubbed the inside and outside of the covers then coated the extended bodies of the rivets with gasket shellac. It took a few days to harden up but has stopped the cats from moving and I hope will address the oil seepage when I reinstall them.

I spoke with the group I bought the trans from a they strongly recommended Ram Clutch. I have been considering an aluminum flywheel and discussed clutches and flywheels with their tech line today. Ordered a 14 lb aluminum flywheel and clutch today. I also picked up a bunch of other bits such as pilot bearing, exhaust gaskets, rear main seal and oil pan bolts to install the new Kevko deep pan. Parts due in Saturday so I’m going to drain the oil tonight in prep for dropping the pan.

The parking brake pedal in my car got wonky shortly after I purchased it. The ratcheting mechanism stopped working. It’s not a big deal in flat SE Michigan but it was something I wanted to fix at some time. Ray posted about the crusty 1970 he was tearing apart and I sent him a note. He’s local to me so we agreed to a swap of ATF for the assembly. I rounded up a variety pack from my garage and drove out to meet him. What a great guy with an amazing collection of Ford hi-PO vehicles! I saw a lot of FE power that day.

Here was the part Ray pulled from the crusty car 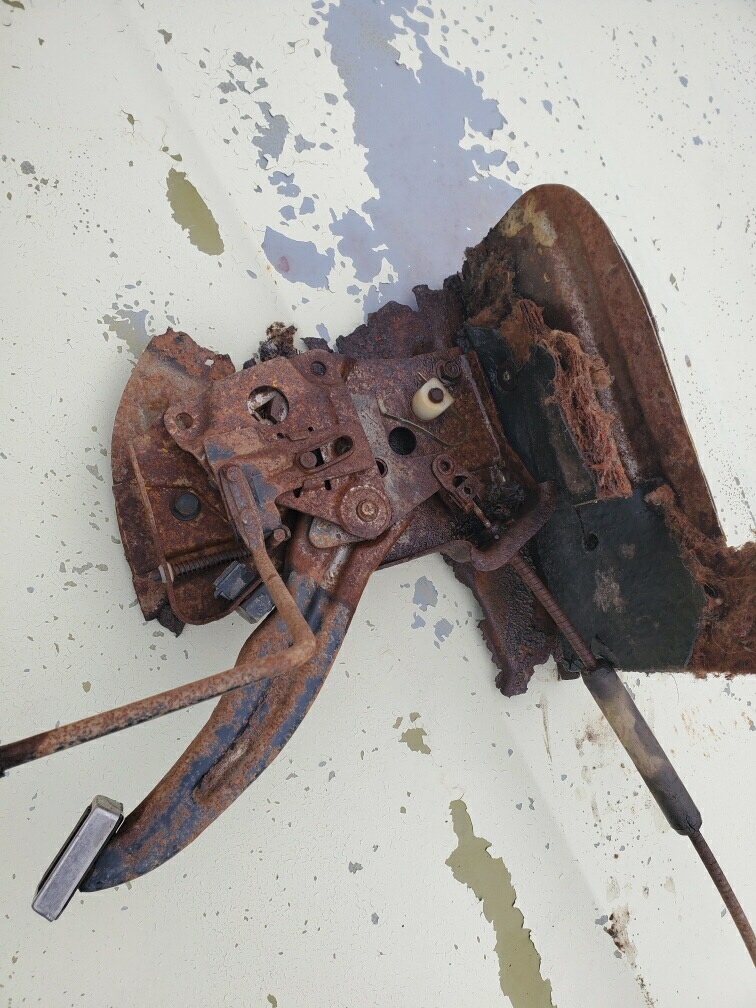 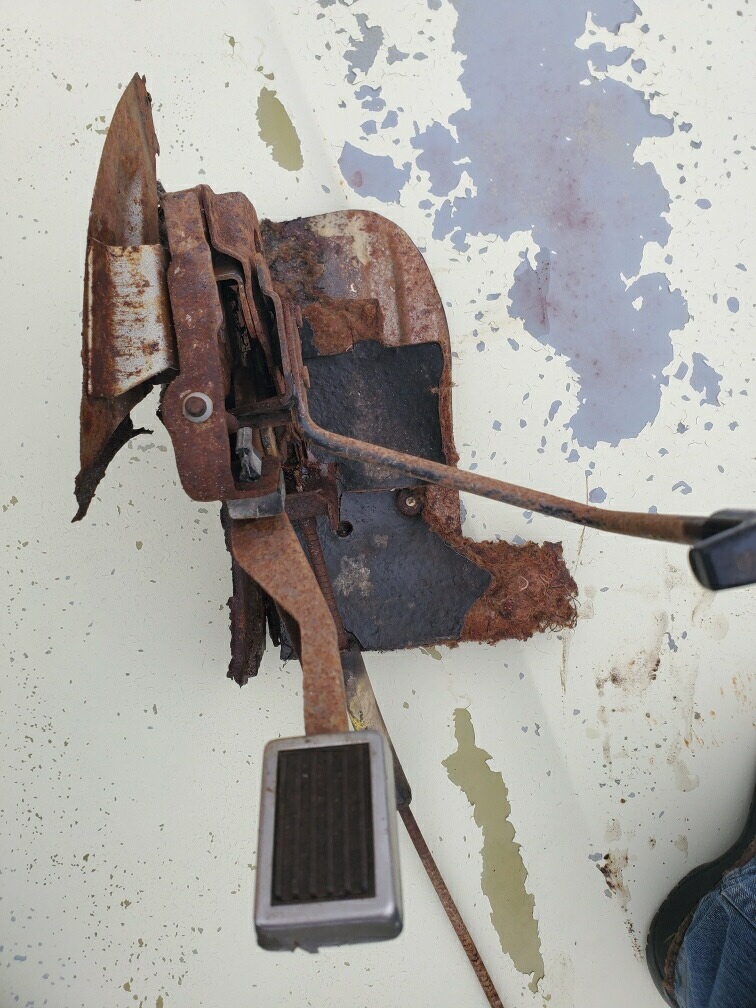 The pedal worked fine but was a bit rusty. I no longer have my blast cabinet to clean it up so I decided to try chemical cleaning with a rust removal product. I ordered some Evaporust and dropped it in a plastic tub for a soak. I was amazed at the results but hadn’t bought enough to fully clean the part. I the bought a similar product form Home Depot that was cheaper but less effective. Here is the part as removed from the second soaking. Total time in the products was about 2 days. 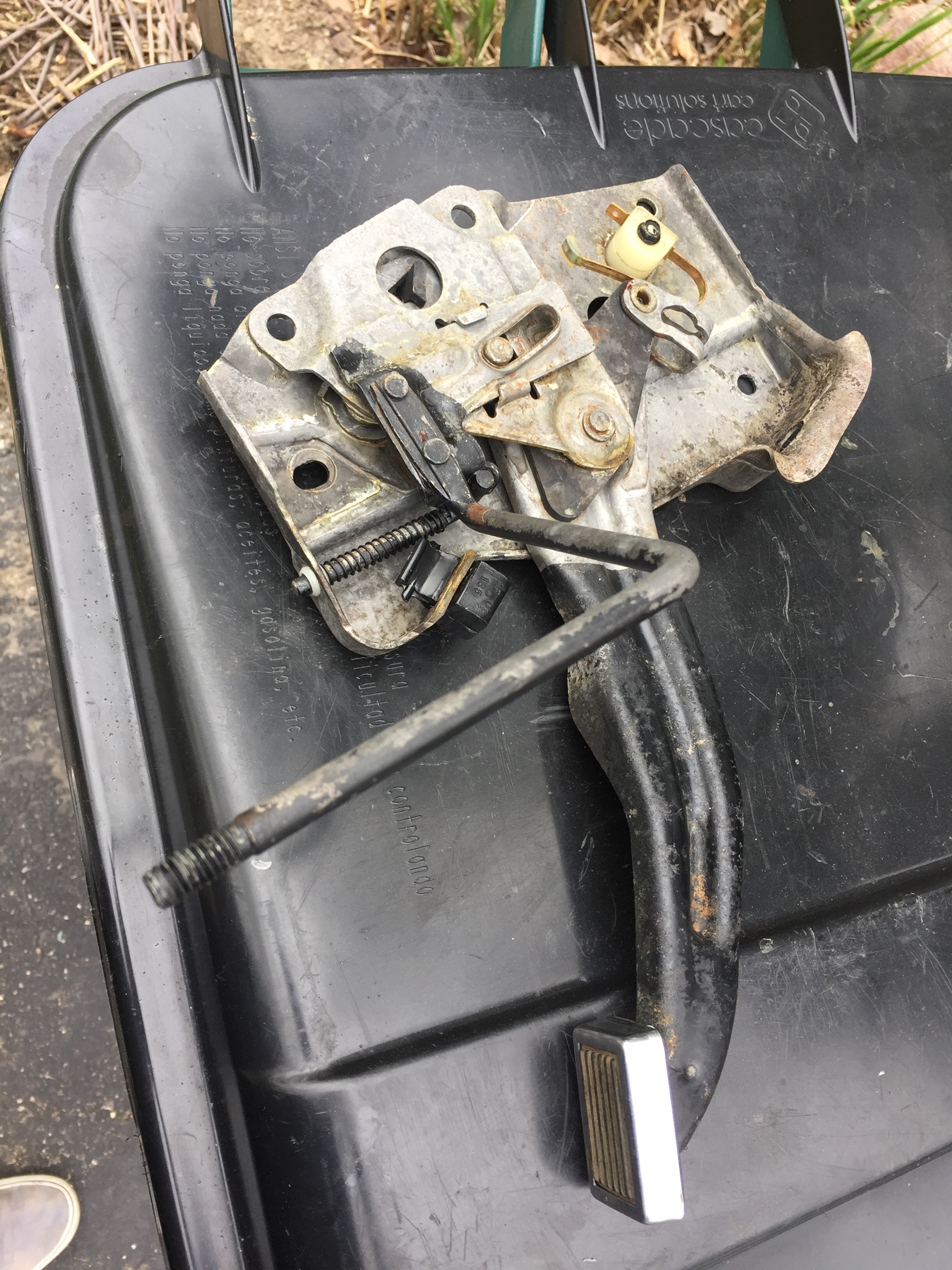 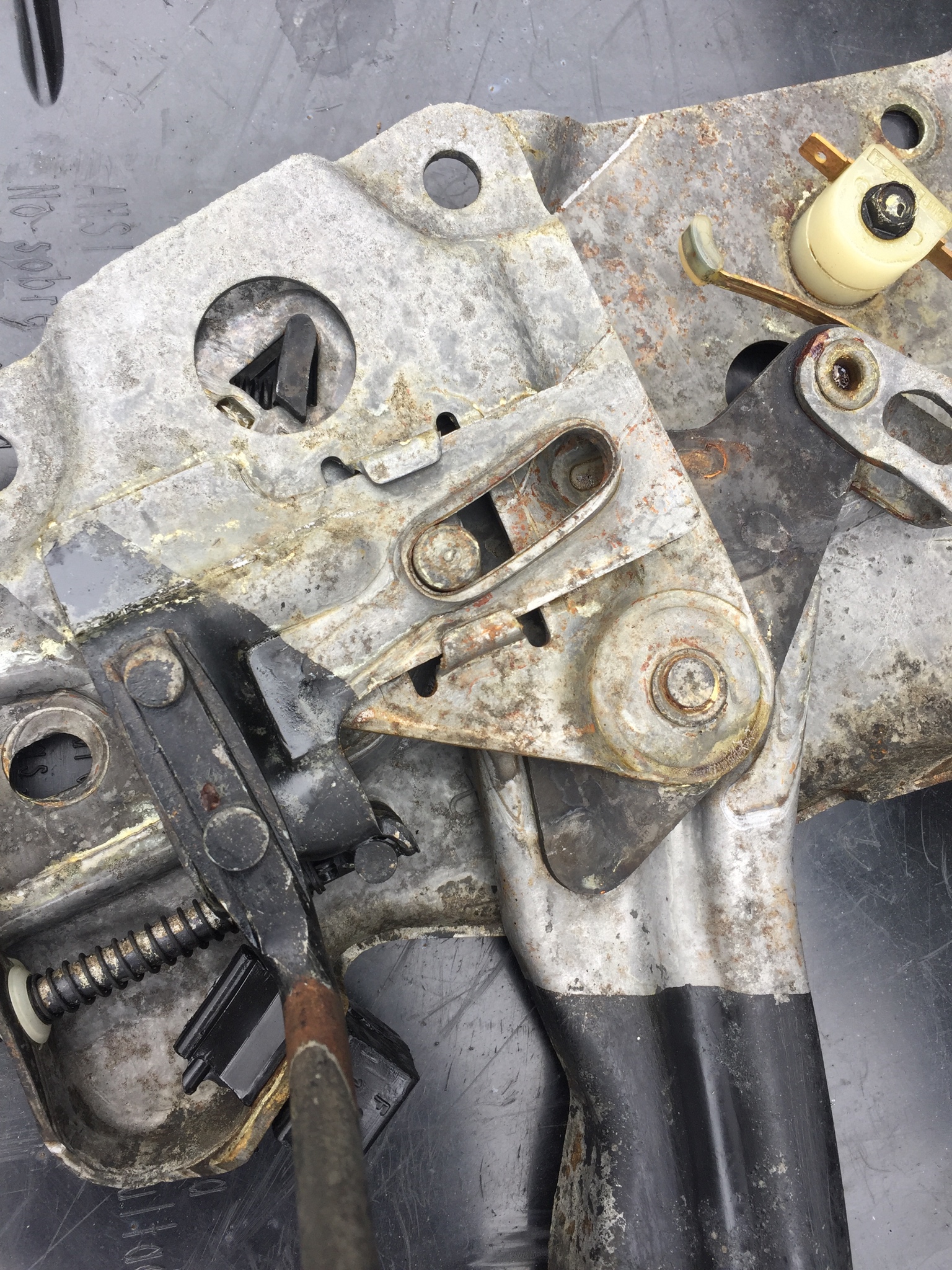 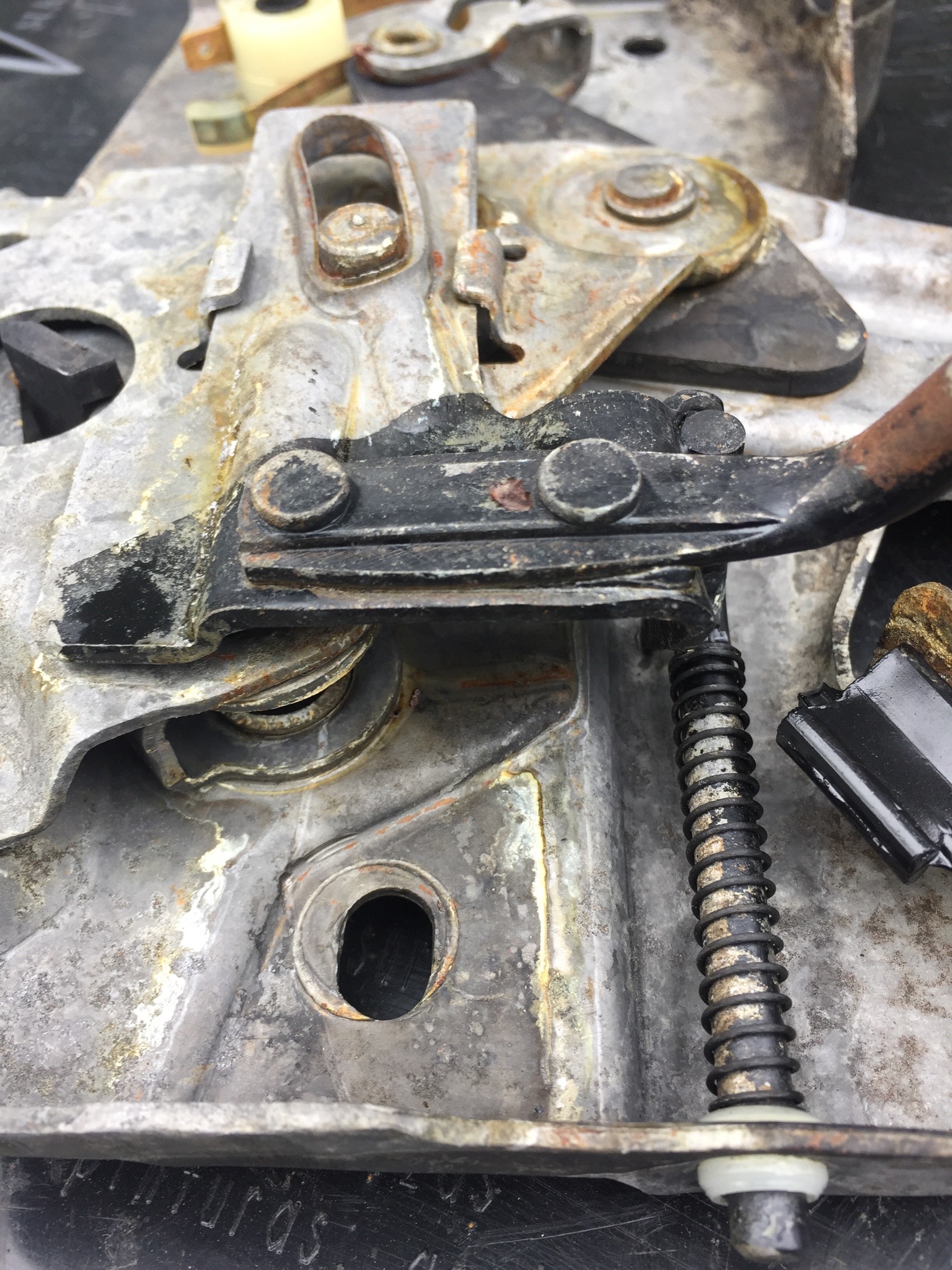 Pulled the bellhousing, pressure plate and flywheel then the oil pan and oil pump. I had to drop the anti-sway bar mounts to lower the bar to pull the pan. I removed the pilot bearing by packing the cavity behind the bearing with bread and then placed a drift in the hole and kept packing it until the bearing was pushed out of the hole. Tonight I’ll install the new pilot and get the new extended pick-up on the pump and reinstall it. I scrubbed the block plate and will clean it up as it has some burrs and bent sections. Tomorrow I’ll install the flywheel and clutch and pressure plate as I got the fasteners today. My rear main seal isn’t leaking it was the oil pan at both the front and rear curved portions of the pan. I’ve wiped up the old oil but want to clean it with brake cleaner and scraper before put on the gaskets.

Picture bomb for you all. 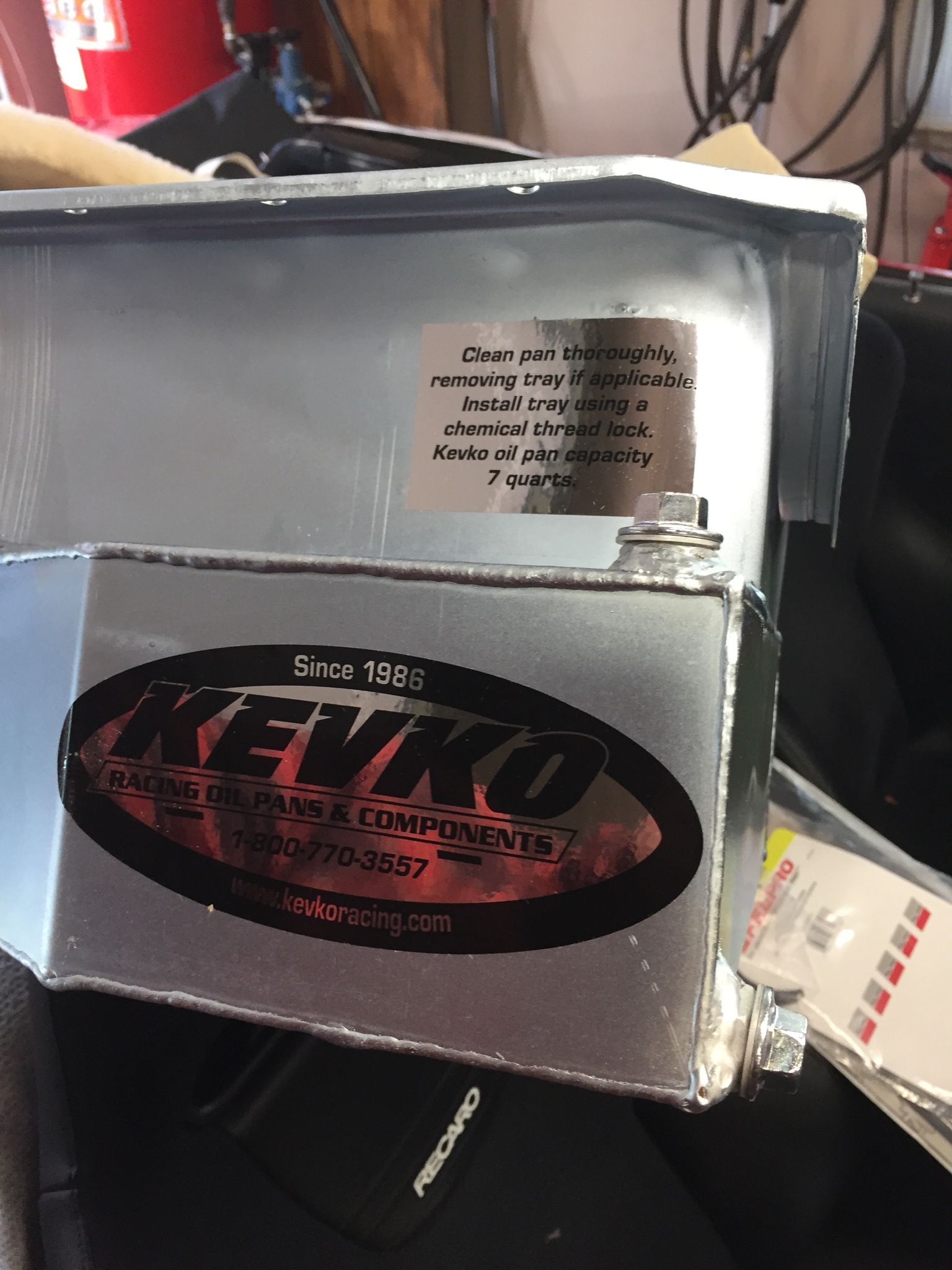 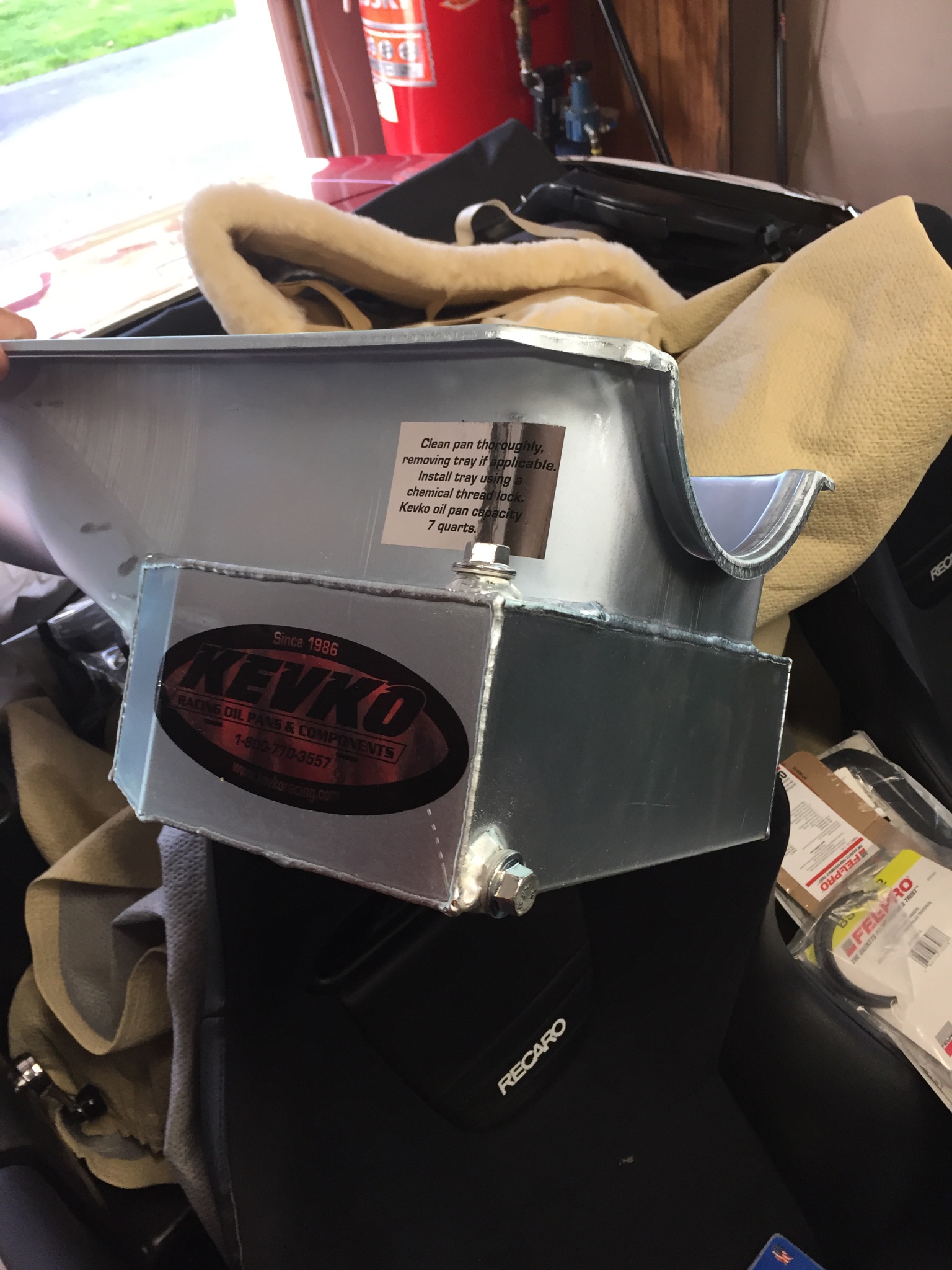 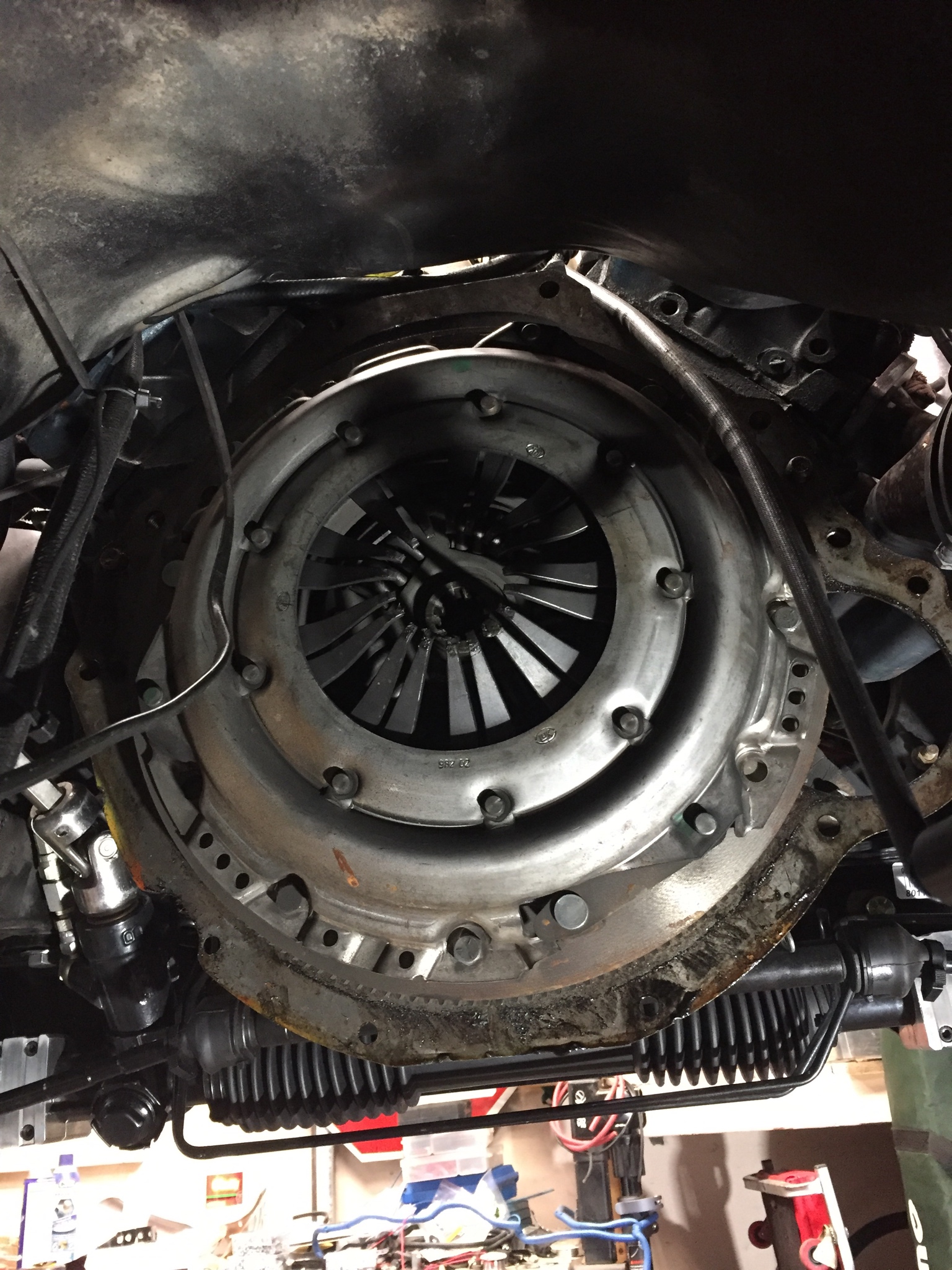 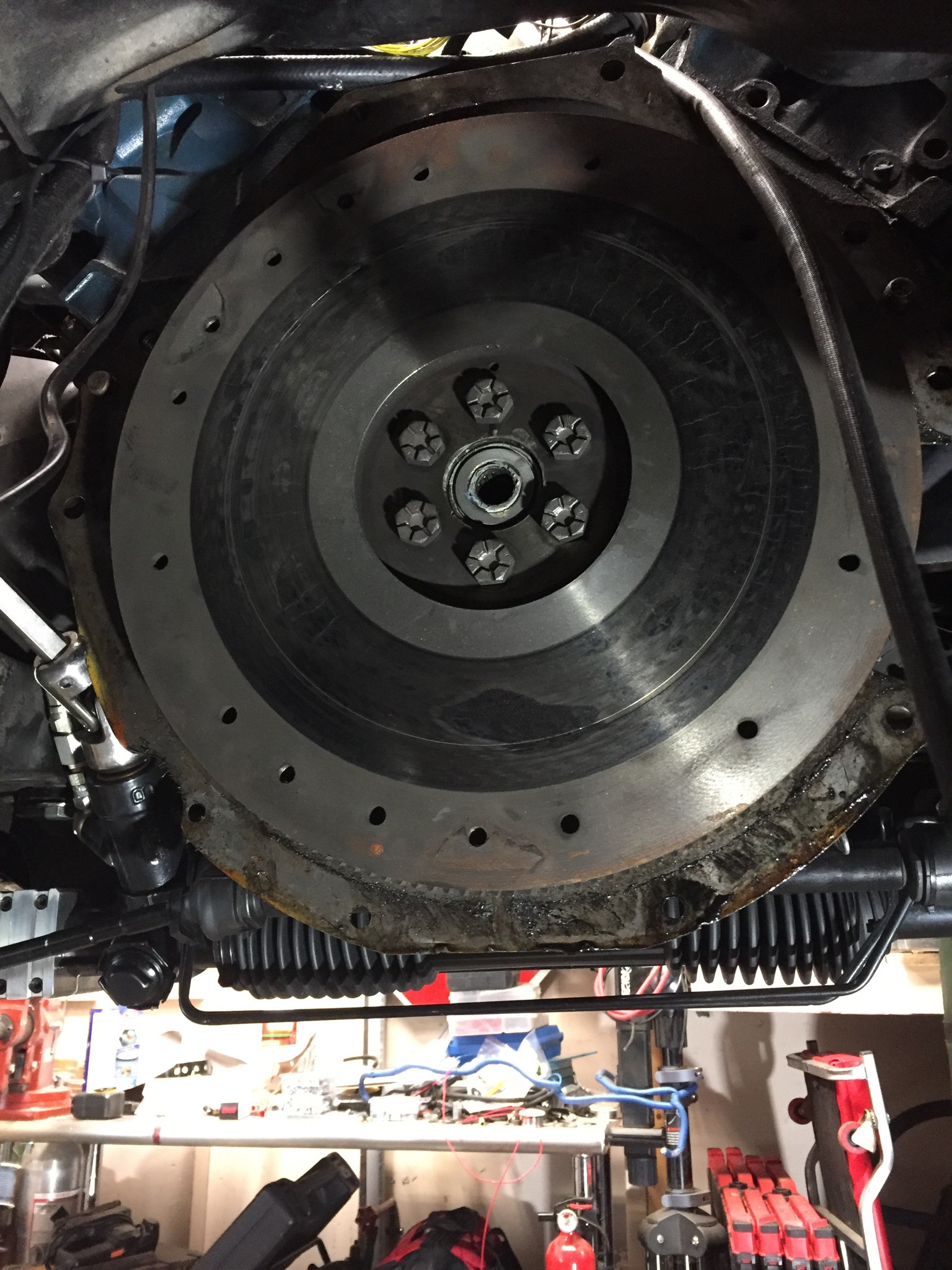 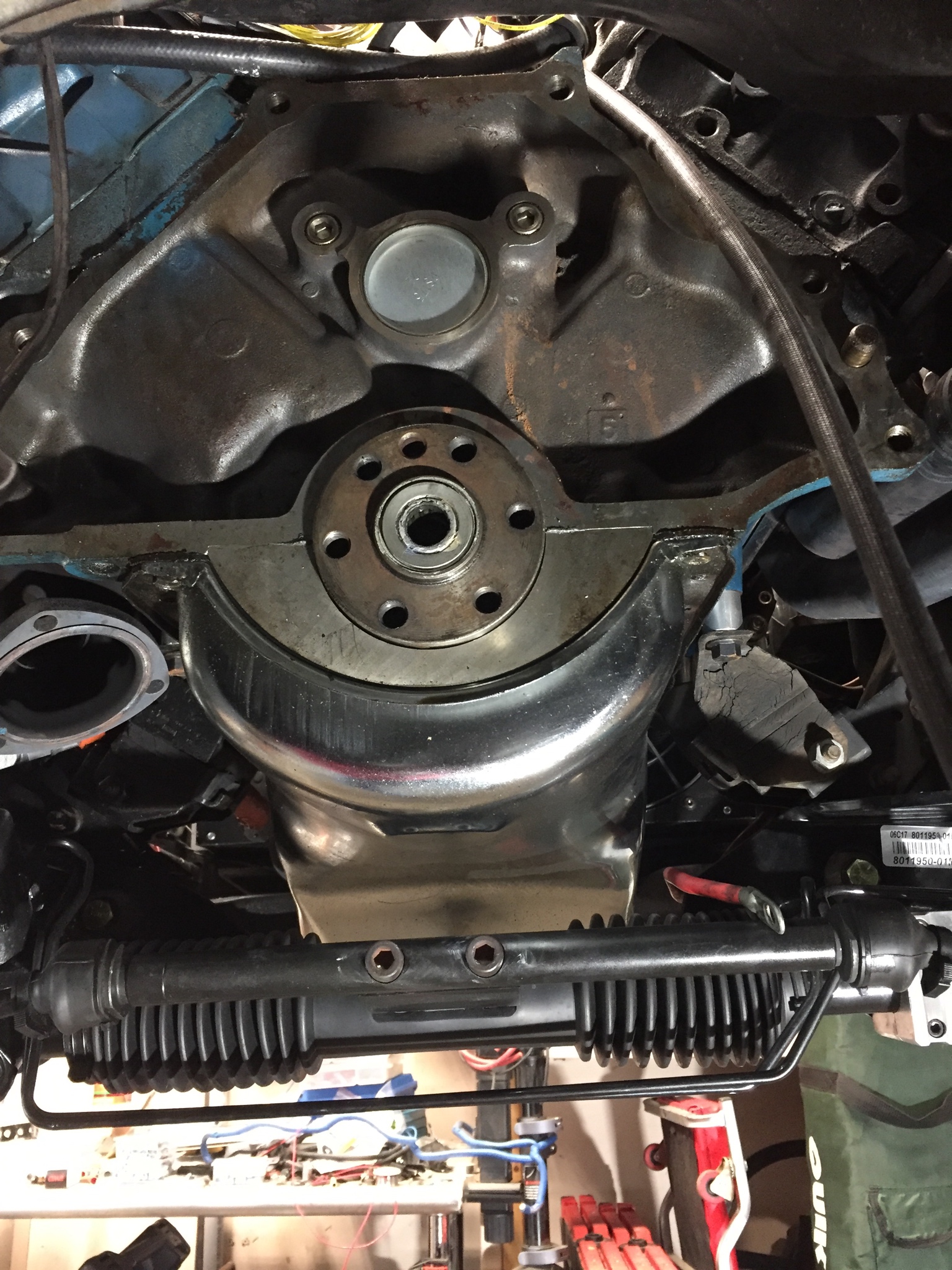 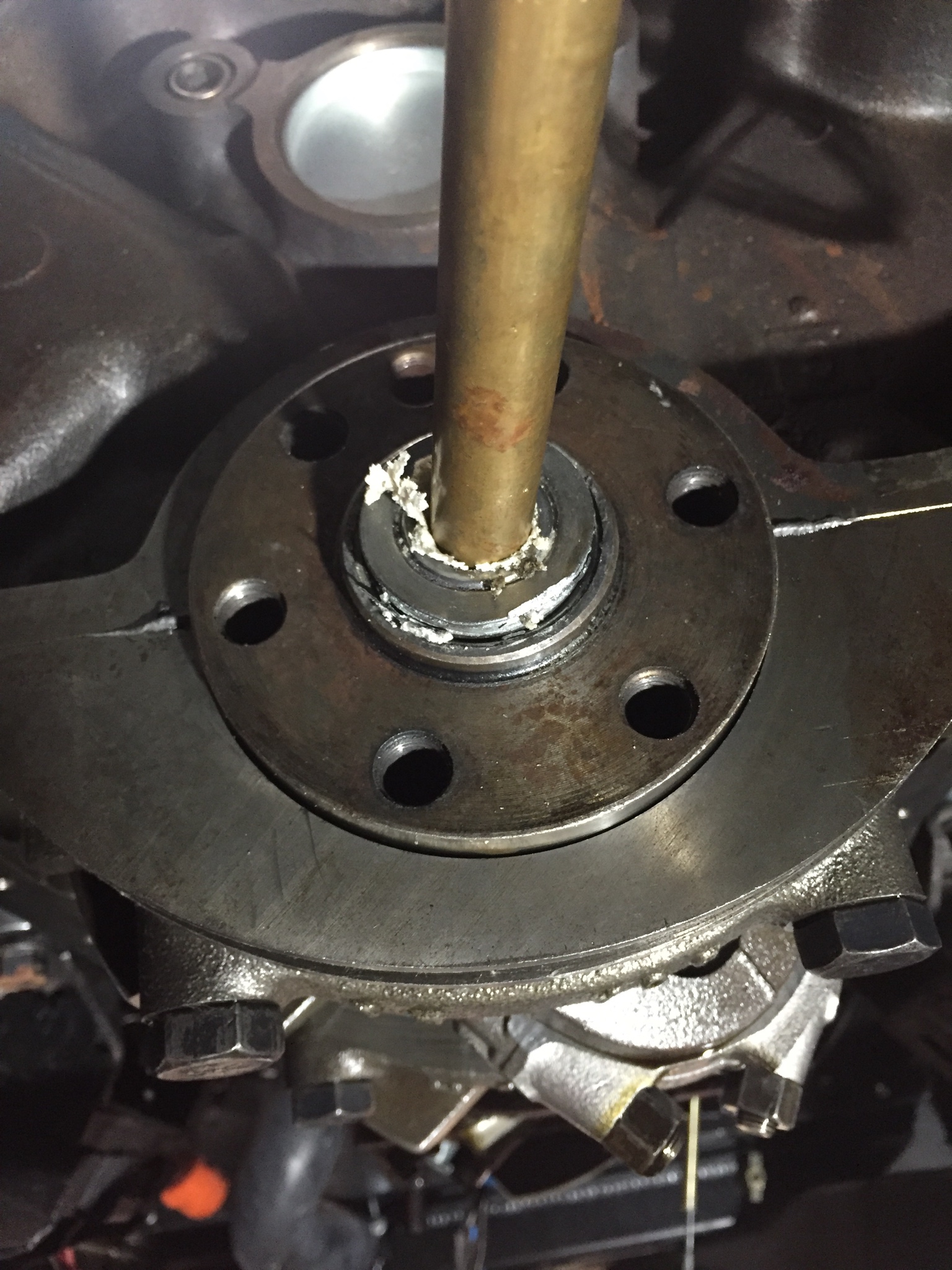 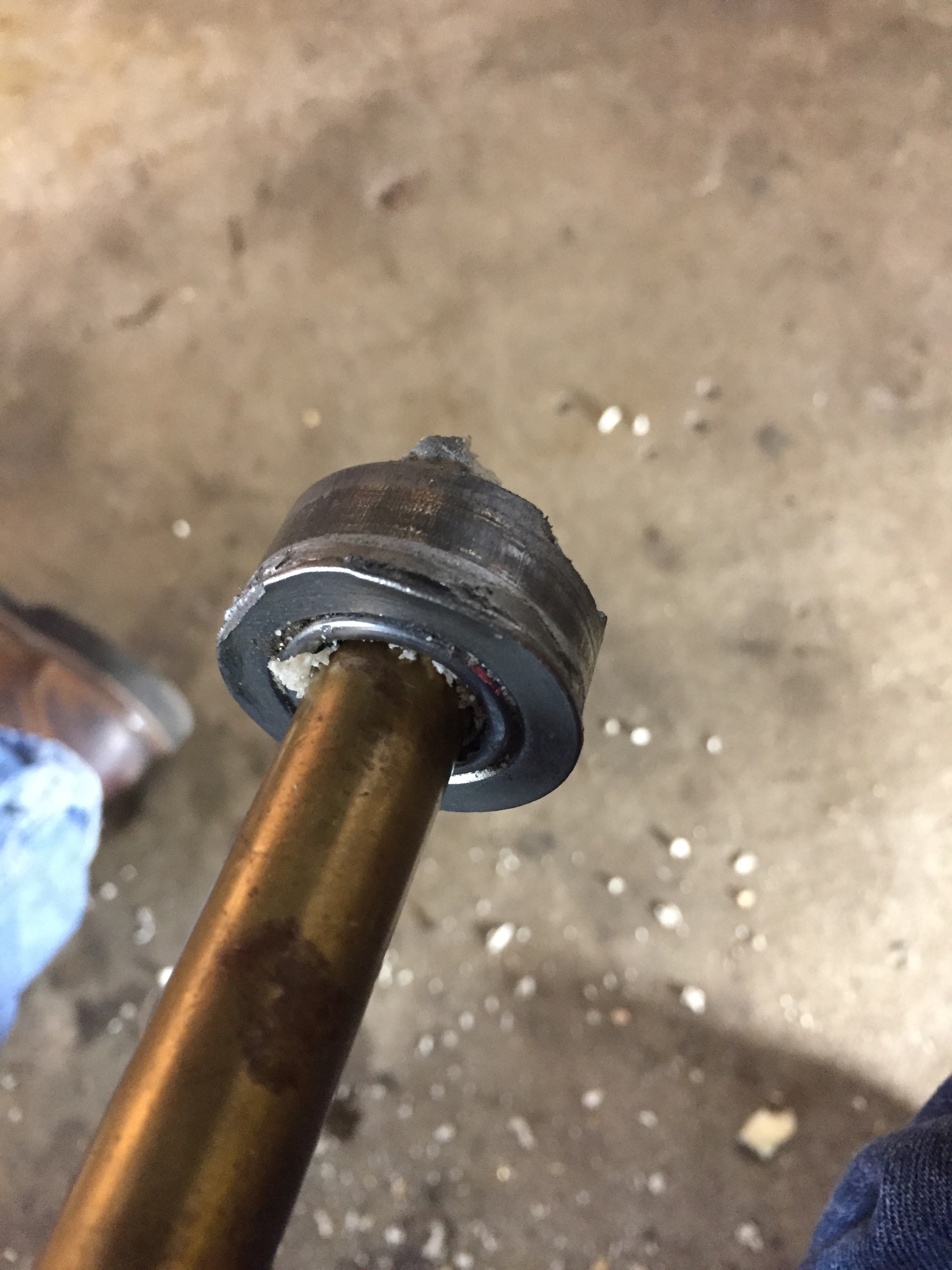 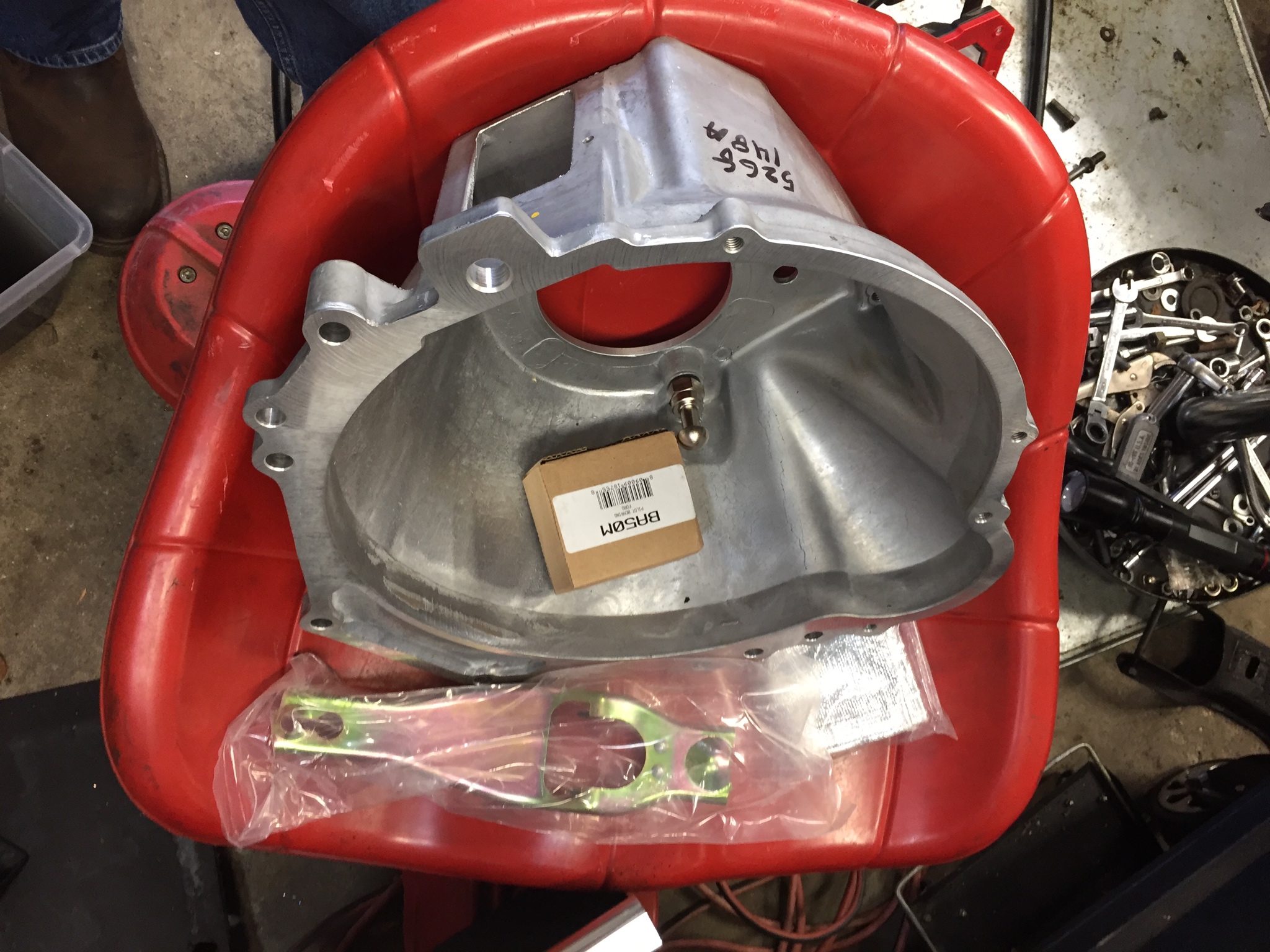 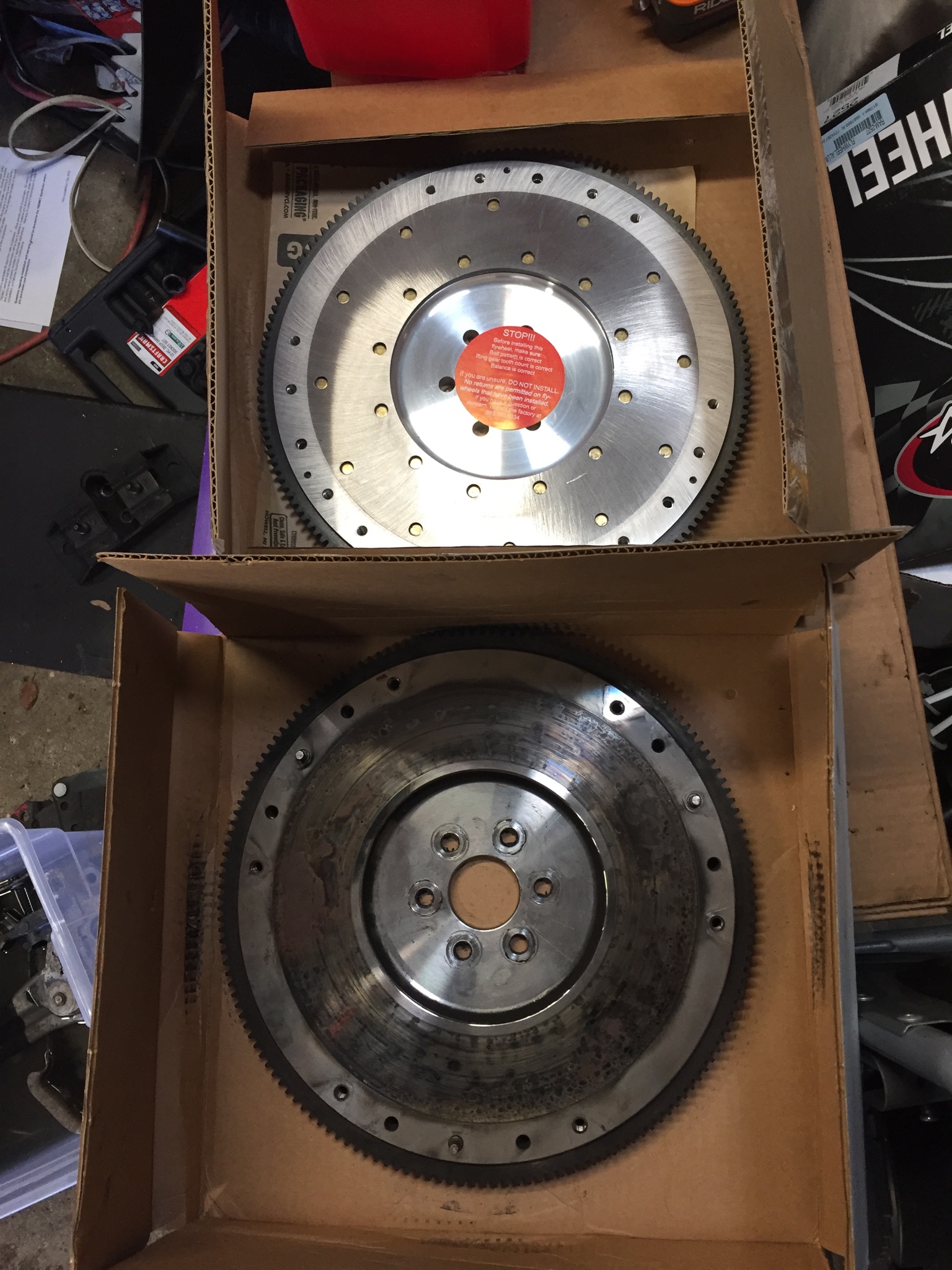 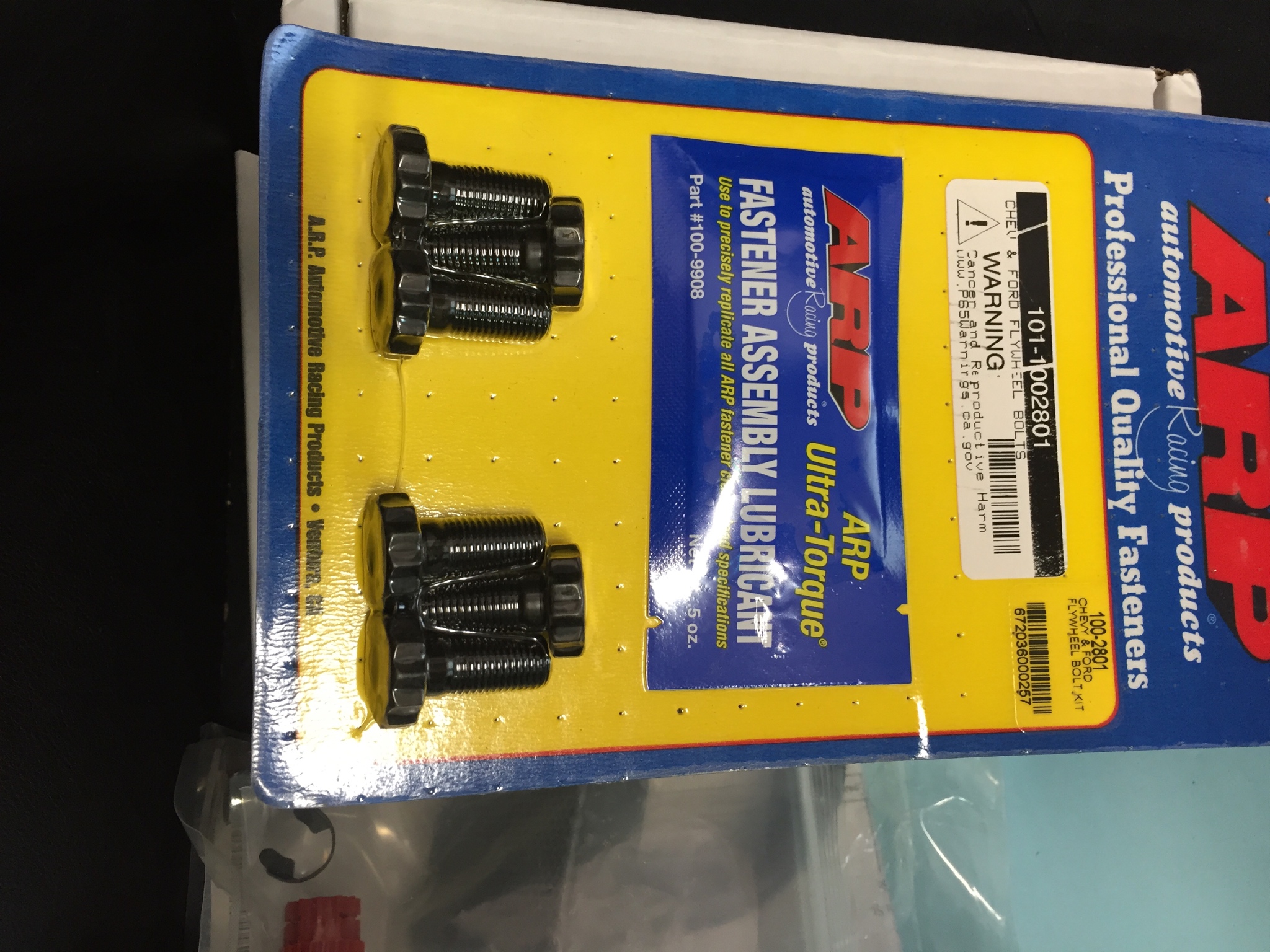 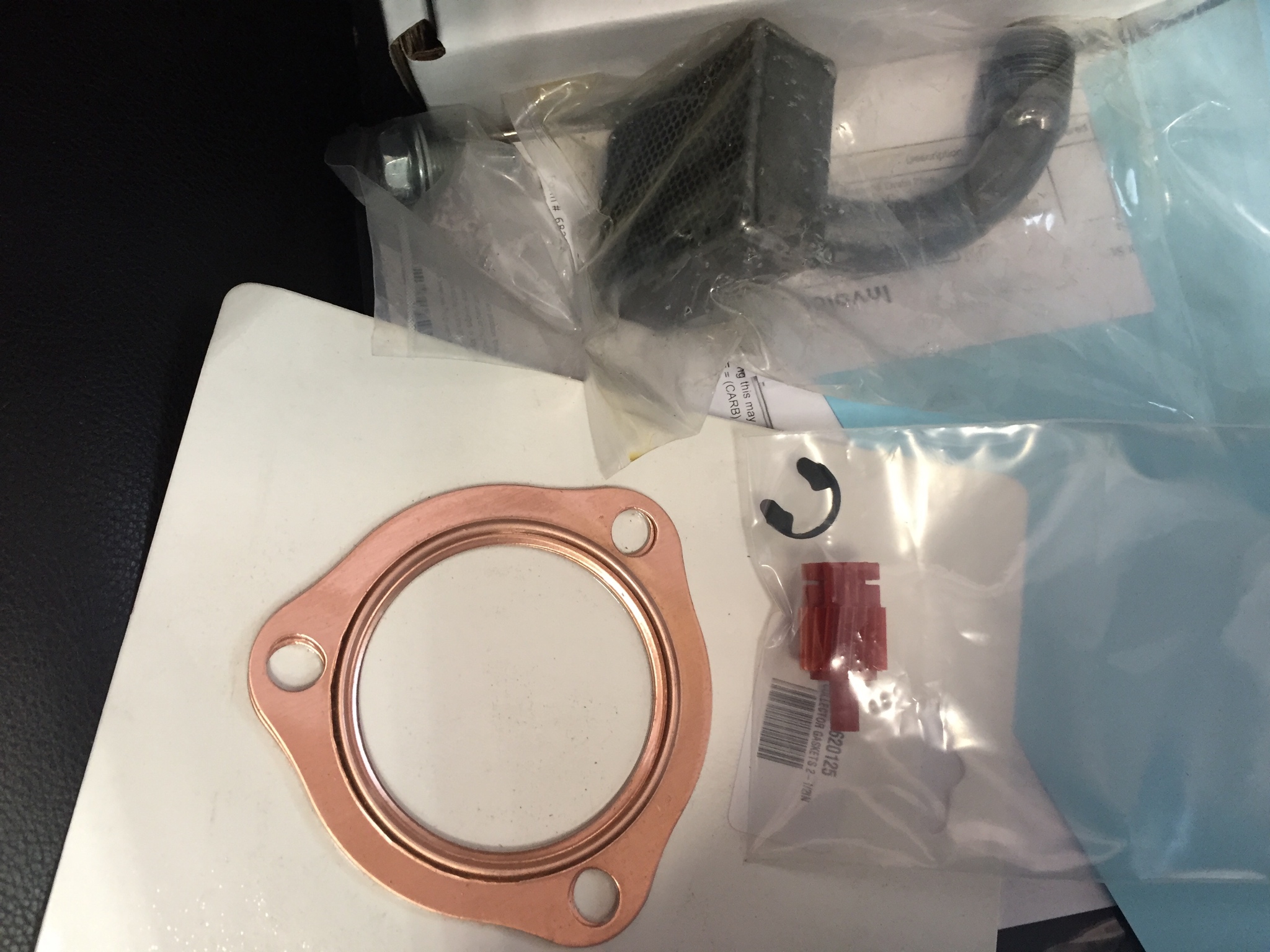 I found a good deal on a Ford Racing billet flywheel as a Plan B should the lightweight Ram aluminum flywheel not work as expected
New speedometer driven gear, flywheel bolts, exhaust gaskets, oil pan bolts and gasket, and rear main seal which I thought was leaking. On tear down it appeared the leak was from the oil pan both front and rear. I’ve decided not to replace the rear main seal at this time.

The previous owner had different goals for the car than I do. I can respect that direction but it’s just not what I would do.
I installed he oil pump and checked clearance to pan. Test fitting the pan required me to fully remove the front anti-sway bar and drop the rack. I cleaned and degreased the pan mounting areas on the block and the pan and applied the sealant. With the end gaskets having notches to fit with the rail gaskets these should have been installed on the block first not the pan. Live and learn. Made the changes and I installed the pan. Got the rack back in place and torqued it down then reinstalled the anti-sway bar. Done for the night.

Damn. I carved out some time to dig in to the car today and as I was cleaning things up I took a better look at the bell housing and crank flange. It appears the rear main seal is leaking

I was running my pneumatic grinder with a wire wheel to clean up he crank flange and the exhaust was hitting the seal area and a small amount oil was coming out. So tomorrow I back track and drop the rack, front anti-sway bar, the oil pan, the the rear cap to install the seal. This thing has been slowly leaking almost the entire time I’ve owned it and between it and my Harley I’m tired of oily driveways and garage floors. Damn.

Back to it after a whirlwind of mishaps, screwed up parts orders and I’m back in the game again. When I pulled the rear main cap I saw copper on the lower bearing. Crap. I bought new bearings, mains and rods twice

and rolled them all out and back in then got the new pan gasket installed and reinstalled the pan. Tonight is remount the rack and anti-sway bar then lift the motor off the mounts to pull the spacers and mark the header for clearance then remove it and lock down the motor to get back on flywheel and bellhousing run-out checks.

Been a minute hasn’t it! After I got the bearings all rolled in and the pan finished up I saw the motor mount rubber had failed and was torn on one side. As I have a convertible, that sent me down the frame stand and motor mount rabbit hole. New coupe frame stands from my local NPD along with rubber mounts, some cussing and some tweaking finally got them in. I had the headers modified to clear the R&P ujoint by Dunn’s Welding in Southfield (great job) then ceramic coated dark gray by Dun Right Coatings in Shelby Township after verifying clearance. As I was about he install them at their new lower height due to different motor mounts I saw how tight clearance was going to become for upper A arm removal. The Street or Track upper A arms are fully adjustable and I had wanted to pull the upper arm in to increase tire clearance to the fender lip during suspension compression with the wheel turned. I dropped the front suspension to pull the upper A arm (wheel, caliper, rotor, tie rod end, upper and lower ball joints, lower shock mounting bolt, and strut rods) and cranked in the rod ends to pull the front wheels in by about 5/16”. Reassembled PS then did the drivers side. Today I install the headers and get the rack back in place and locked down then the flywheel.

Last night I got the headers in, the bellhousing on and checked TIR using the existing dowel pins. Out of tolerance so I had to swap them to the 0.007" offset dowels. To do that swap I had to remove the DS header to tap out the dowel. I knocked them out and then set the offsets back in and rand the checks until I had the numbers within range. Mounting the magnet base to the AL flywheel was a bit of a challenge but got the job done. 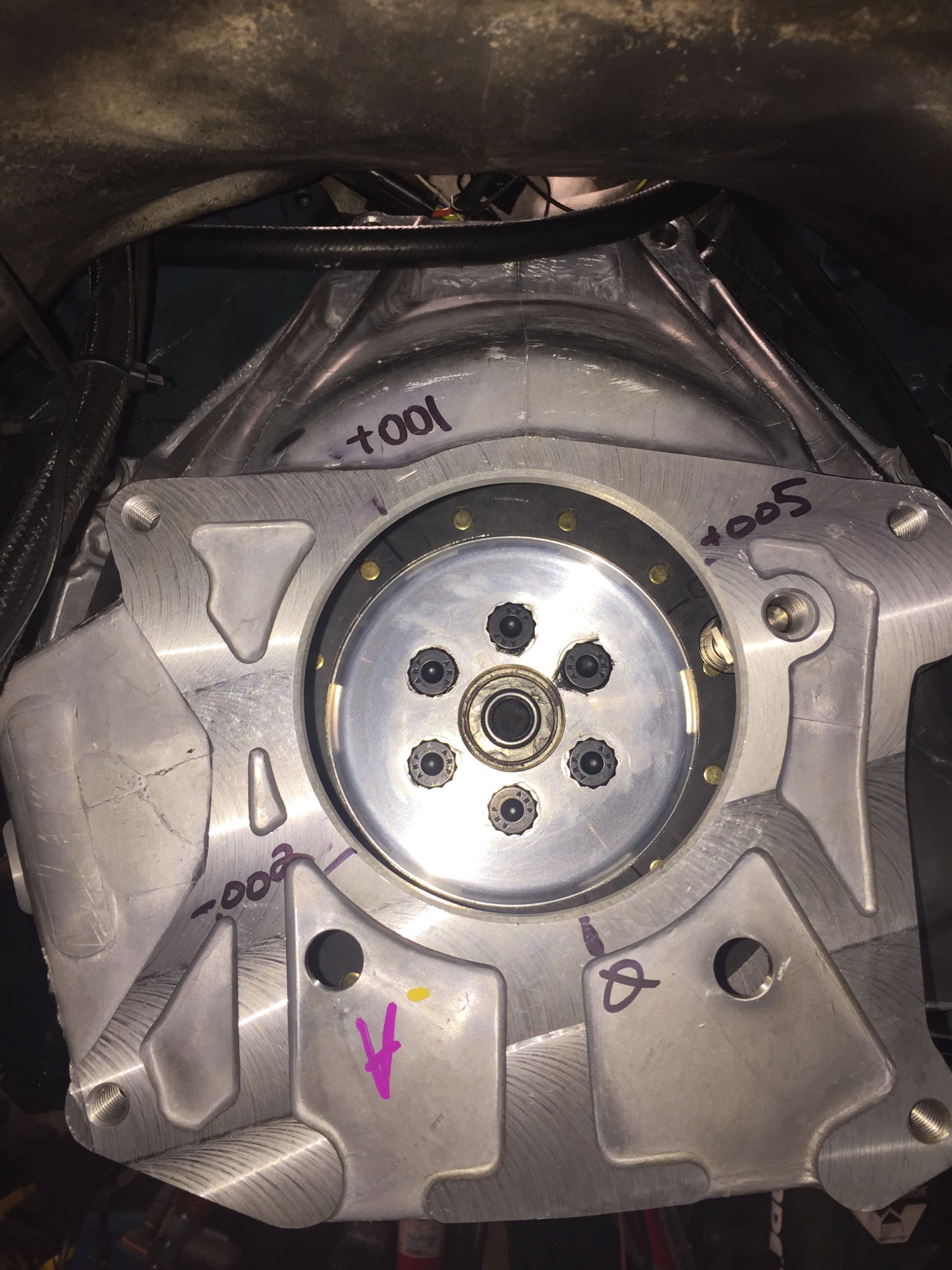 I also hated the look of the plumbing provided by Unisteer for the R&P. I saw this neat little SS bent tube one day while poking around Summit and ordered it to help clean up the pipe runs. 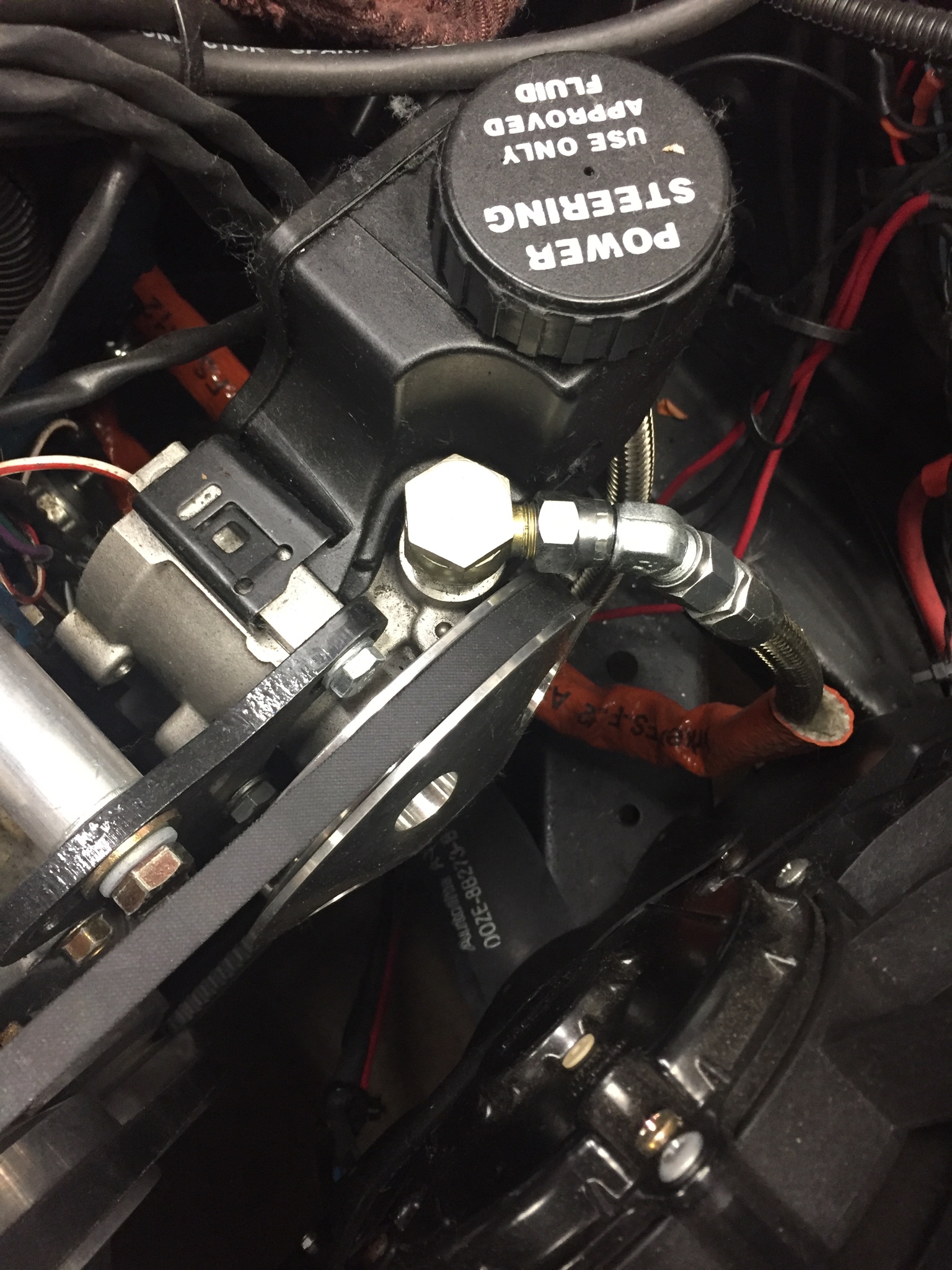 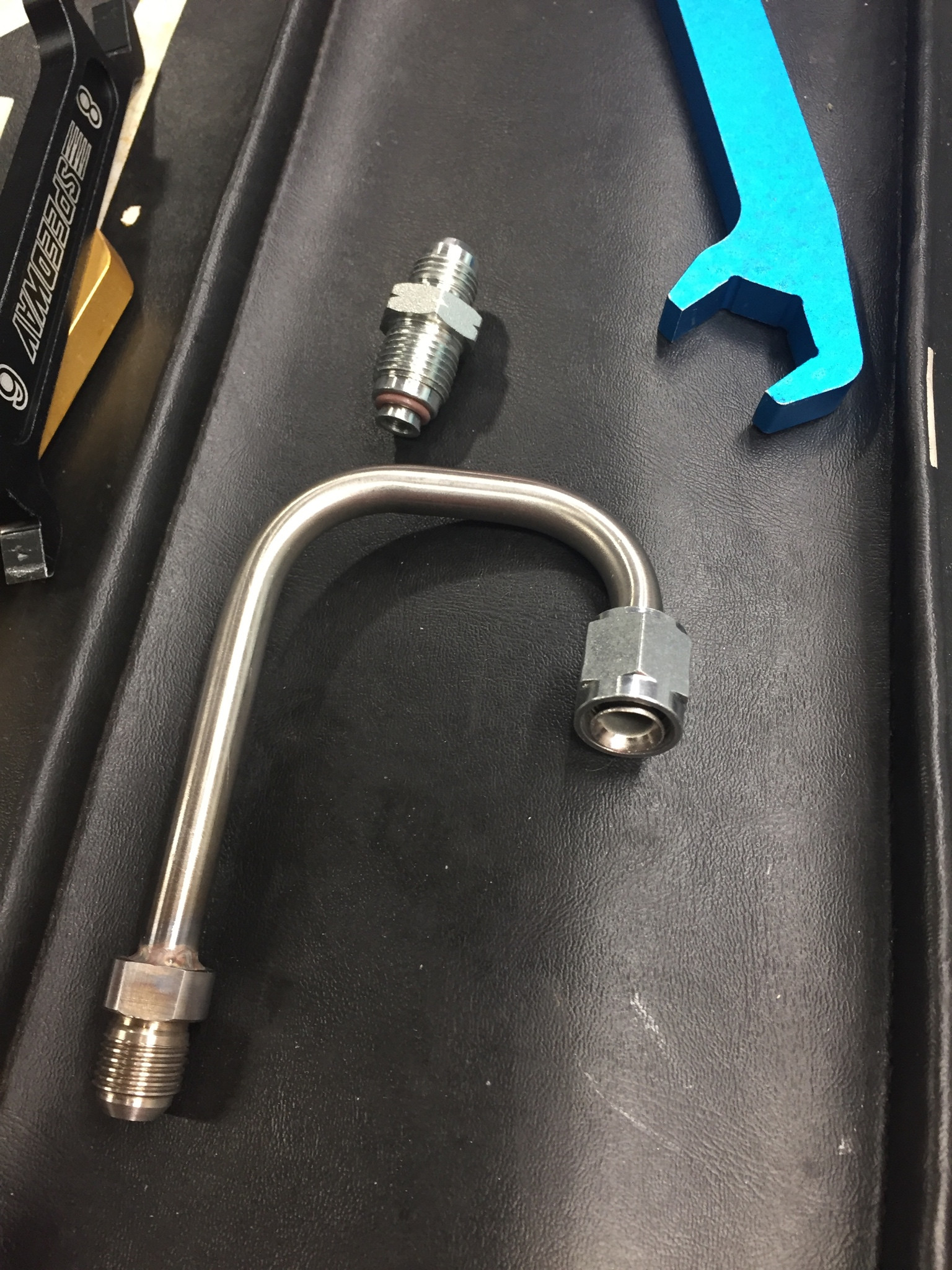 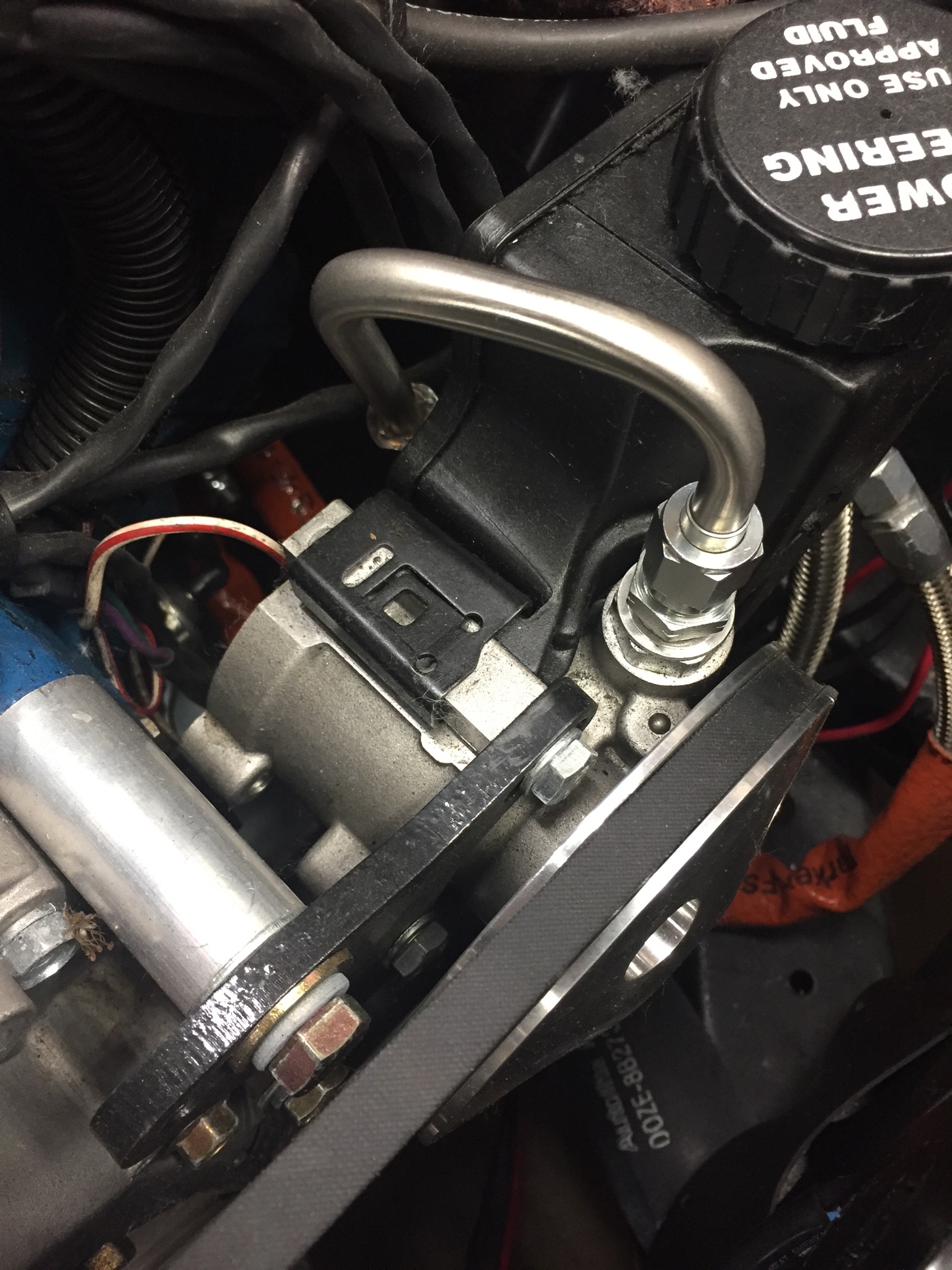 Tonight I’ll get the DS header back on, the clutch and pressure plate installed, and get the pedals out for a roller bearing change and start on the hydraulic release system from MDL.

Great work and write up. I’m sure it will be a pleasure to drive once you’re done.

Thanks Steven. I expect it to be a completely different car when I get it back on the road-3.70 Auburn diff, five speed, lightweight flywheel-should amp up the experience!

That power steering hardline is the ticket. That makes all the different in your setup.

Thanks DieselD! I thought it looked great in the pictures. It proved to when installed as well. Once roadworthy I want to focus on the odd elements with the goal of cleaning things up. The car’s wiring under the hood is a mess. I’m going to do a custom aluminum trunk panels I’ve the fuel tank with access door for the pump and fan controller and mounting point for the spare. It will also extend to the quarter panels to fill in the wells. I need to devise a custom mount for the FiTech controller where the radio block off plate is now and about a million more things.

Why alum flywheel? Keeping it as a street driven Cougar or a road track car.

I wanted to try and get the car to rev quicker than it did with the OEM iron flywheel. I’ve done a lot of thinking, reading and looking at reviews of lightweight flywheels on street cars and thought I’d give it a try. I’m increasing (numerically) the gear ratio and expect a learning curve but not a horrible driving experience. I have a back-up Ford Motorsport steel flywheel should I hate driving it with the AL flywheel but don’t think I’ll have to use it.

The car will be primarily street driven though I hope to get back in to autocross next year.