Edelbrock carb on a j code

I swapped out the factory carb on my 68 base Cougar 302 4bbl 4 spd with an Edelbrock and need help with the throttle linkage set up. What should I use (original throttle linkage doesn’t seem to fit anymore although I can’t guaranty what came with the car is actually factory). Also have a conflict with the ac compressor brace which conflicts with the throttle on the new carb. Any ideas on how to make all this work? Thanks

Can you take a picture?

I used to use a Edelbrock to pass smog here in AZ. I made an adapter that consisted of a round bushing with a hole in the center that fit in the large hole on the carb throttle bracket. The center hole in the bushing was the right size for the factory throttle linkage to fit through. I put washers on either side of the bracket and bushing to keep the busing centered. If I remember correctly, the center bushing started out as the metal center of a roller for a sliding screen door. This sounds kind of flaky but it never failed.

On my sons car when it had the J code still in it we had to make a new brace for the AC compressor that moved the mounting location to line up with a threaded hole in the intake manifold by the coil. When we went with the 351W we switched to a rotary compressor and no longer needed the brace.

I used to use a Edelbrock to pass smog here in AZ.

There’s a smog test for 50 year old cars in AZ?

I used to use a Edelbrock to pass smog here in AZ.

There’s a smog test for 50 year old cars in AZ?

oh yeah, tell e’m about the model T that they made you put cats on.

Anything newer than 1966 has to pass smog, or since about 2014, have collector car insurance. I have a '74 Triumph TR6 that I had to store when I moved here in 2001 as it just would not pass. I was able to get the Cougars through by using a 500 cfm Edelbrock that I set up for the tests. With needles and jets that you can change from the top side you can really do very fine adjustments.

One nice thing is you don’t have to drain out a quart of gas to make those adjustments.

Here is a picture. The throttle on the carb wont allow the standard clip to snap into place and it is too big (drops too low) for the a/c compressor brace to pass under. I suppose I could start cutting pieces off the throttle to fix things - just hate to do that without knowing whether or not that will screw up how it functions. 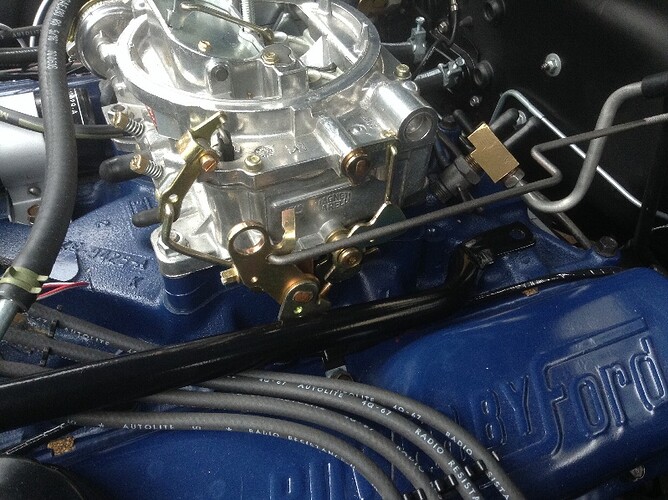 Could you put a little bend in the A/C support bar?
What trans are you running?
Where are you going to put the throttle return spring?
Are you talking about the clip that holds the linkage rod onto the throttle arm?

Could you put a little bend in the A/C support bar?
What trans are you running?
Where are you going to put the throttle return spring?
Are you talking about the clip that holds the linkage rod onto the throttle arm?

Think if I put bends in the support bar it will shorten the length and not meet up with the mounting holes, but it might be worth having a new one fabricated to get underneath the throttle
It’s a 4 speed toploader - factory
Spring is another good question - thought maybe someone had worked all that out
Yes, that clip - the way the throttle arm is configured it won’t snap over the linkage like on the autolite carb

Looks like edelbrock makes an adapter kit but it’s for an AT with a cable linkage.

Ah, that style clip. That has the hole and has a lever that semi-wraps around the link arm. You may have to drill a 1/16 hole in the arm to use an R clip to hold the linkage in place.

You can fab a new A/C support. Or, perhaps elongate the bolt hole to accommodate the rod being slightly shorter.

top loader----good, no kick down or TV cable to deal with.

A spring would be best positioned from the bottom of the throttle arm toward the back of the engine. If you are fabbing a new A/C support rod perhaps you can weld an eyelet of some form to the A/C rod. I’d prefer the spring on the bottom, versus going from the top and forward. The top going forward to me looks less neat.

The throttle arm adapter is not for your application.

Here is a pic of my set up at the exact angle as yours. The A/C bracket has a very slight bend in it to achieve the necessary clearance.
Also the spring assembly is clearly shown. 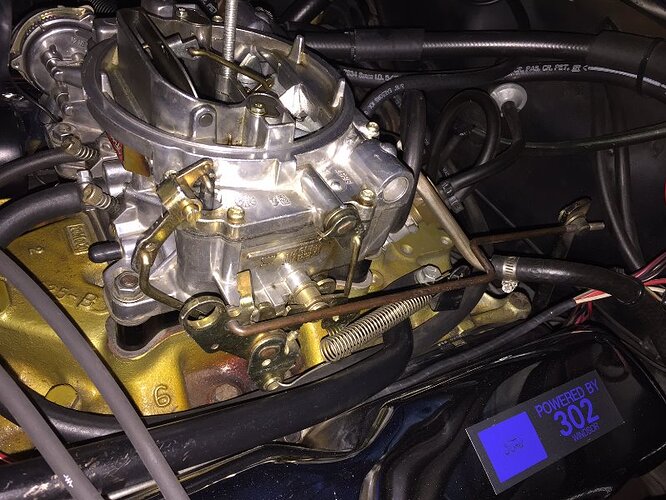 On my Summit Carb, I took the throttle rod off, and used a VERY small drill bit in my drill press to make a hole for a cotter pin. I used a small spacer (made up of three small washers) to take up the slack from where I drilled the hole. I will be glad to give you photos. The reason I did this is I didn’t trust the 40+ yr. old retention bracket, and wanted a positive way to keep the throttle rod attached to the carb.

The factory clip is not going to work. The easy fix is to drill a hole in the rod and use a cotter pin. The throttle action is also pretty fast when you use that lower hole. A small movement of the gas pedal results in a big change in throttle opening. The large hole at the top is where you want to connect the rod.

So here is what I did to blend the factory setup with the new Edelbrock carb. I fabricated a clip (modified something I found laying around the garage) that looked similar to the clip shown in the assembly manual so it could bolt on the rear DS carb stud. I had the factory spring and throttle rod so I worked with those on the spacing. I used the accelerator rod bushing as shown in the assembly manual but flipped around (so stud on linkage rod entered from the DS rather than PS) since the new carb seemed to be just a bit wider. I then used the same bushing set-up (had to thin it down some - both the rubber and plastic) on the large hole on the carb throttle with a larger washer on the inside and drilled a tiny hole for a pin as suggested. Everything seemed to line up perfectly with the right tension on the spring. Works well. Thanks for all the input here. 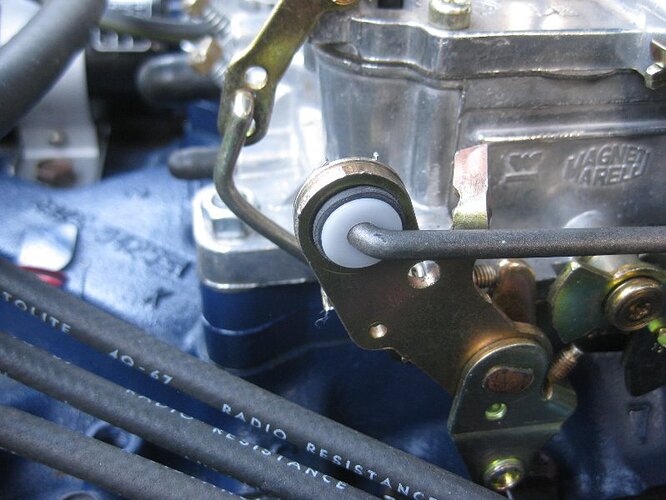 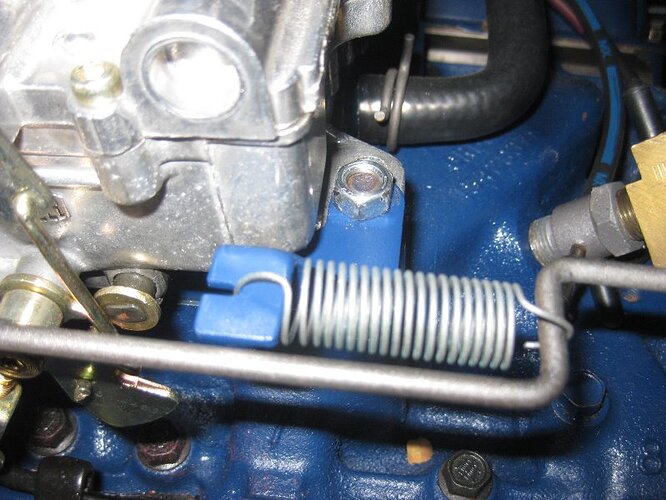 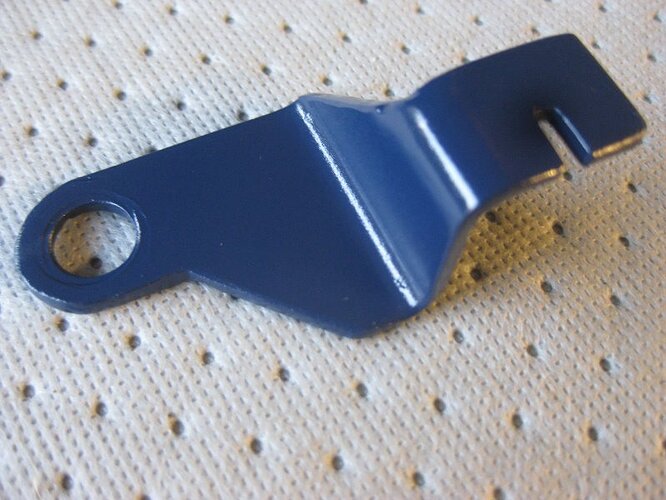 Get yourself a 1/4 or 1/2" carb spacer (4 hole). Your carb should clear, and the carb may appreciate the insulation from intake heat.

For the throttle rod I have used a die and threaded the end enough to put a nut on the inside not touching the carb piece, put thread locker on and crank it. Also put the throttle rod in a vise and very slowly drilled a hole through it with a Dremel (used 4 bits) and then put a cotter pin through. Put a right angle bracket under the back carb hold down nut and attach the spring. Make the bracket as high as needed to align the spring with the rod bend. Straighter the better.

This looks very very much like what I did. I also ended up bending a fuel line to go to the new fuel inlet location as all that rubber line was making me nervous. Probably didn’t make any difference.

Get yourself a 1/4 or 1/2" carb spacer (4 hole). Your carb should clear, and the carb may appreciate the insulation from intake heat.
Did the spacer on mine and have yet to have a heat soak issue. I also blocked the crossover. Runs well that way and doesn’t burn the mixture before it gets where it needs to be.

Get yourself a 1/4 or 1/2" carb spacer (4 hole). Your carb should clear, and the carb may appreciate the insulation from intake heat.

His carb will definitely appreciate it. Did a phenolic divided wall spacer and fashioned my own “air gap” channel. Really woke mine up down low.