I noticed a faint smell of what smells like burning electrical wires when the family and I was out getting ice cream on a hot summer evening.
It a smell that if you had an electrical fire earlier in you life you never forget. Well I had one back in the day in a different vehicle. I tell you when you smell it you panic. We were stuck in between two cars and there was no way out to even turn off the car and inspect it.
We finally got to a quiet stop to which I turned off the car and went from front to back and could not find nor smell anything. Did not know if it was one of the other vehicles in line or it was mine.
Every time after that I wait to smell it. There has been a few time to where I think I smell that smell but wasn’t strong enough to find where it’s coming from.
Worried I’ll have to pull the whole dash apart to investigate but if there is anyone that might have some ideas of what and where I should check before I pull it apart.

Obviously look at all non-factory wiring as well. Then the ignition switch wiring from the solenoid to the switch and from the switch to the fuse box. If a short occurs in any of that wiring it is not fused.

I hope this helps.

Well
It’s a start and I never would have thought the bower fan but this is why I thought I’d ask. The only thing about that is. It was hot out so I wouldn’t have had the fan on. For this to make that smell would not the fan have to be on?
And the Solenoid is that the one by the battery or is there another I’m not aware of

Yes the fan would have to be on at any speed for that to have caused it. Yes the solenoid by the battery.

People often add high performance coils that have much lower impedence than the original. This pulls more current through the resistor wire under the dash and the key switch. You can easily exceed the capability of those items and get them hot. You will find the greatest heat across the highest resistance, that means a .6 ohm coil will heat up a 3 ohm resistor wire.

Bad connections anywhere there is much current will make heat.

This happened to me with the plug for my brake light switch. 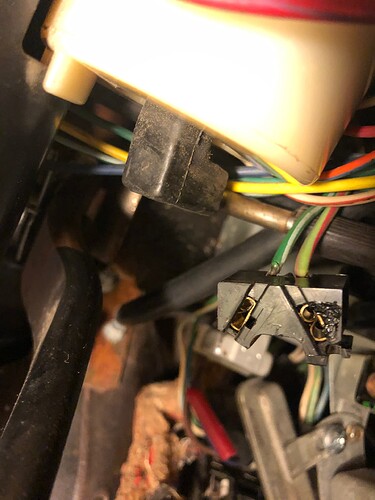 And I did replace my original coil with a PERTRONIX FLAME-THROWER COIL a few years ago.
I really hate this. I guess I’m going to have to tear apart the dash this winter. I did just replace the ignition wiring a year ago. Bought one from rock auto. But it was junk. Wouldn’t work my sequential tail lights. Found an original harness out of a 73 cougar.

So
What did you do to fix the issue with your brake switch and what caused it?

This happened the day I got it started, last year.
I smelled smoke, looked underneath the dash on drivers side and started looking. Figured if there was smoke, there’d be visible damage.

By accident, I pressed brake pedal and saw the smoke. It was a loose connection. I temporarily fixed it by taking the spade connector out a squeezed it tight again. 3k miles later and still good.
It might not be that fun to check it, but I’d recommend looking at it and all other accessible connections before taking dash apart. Good luck with finding the culprit.

Hope the fuse blows before the fire starts. Some wires in the cougar are not fused. This could be a problem. Good luck.

I will check that first. I have to be in the mood to get into
Contortionist mode if you know what I mean.
That’s why I have all winter to figure it out. I guess I should do it sooner then later because when my AOD gets back from getting rebuilt. I’ll be working on that. My luck I’ll get the transmission done and go test it and the car burns to the ground.

Check out the turn signal switch connection at the bottom of the column by the dash. Mine was melted….

I will. Thank you
I will update you guys when I look into it. Might be awhile with the holidays coming. To bad they don’t make a tool that can zero in on burn wiring smells. Lol

For contorsionist (sp?) mode pull the drivers seat, only 4 bolts. You can layout on the floor pan with your legs in the back seat! Much more comfortable. Learned that doing a brake booster.

That what I’ll end up doing. For sure. Thanks