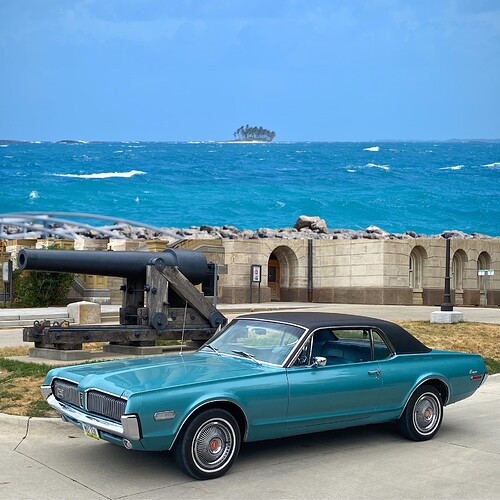 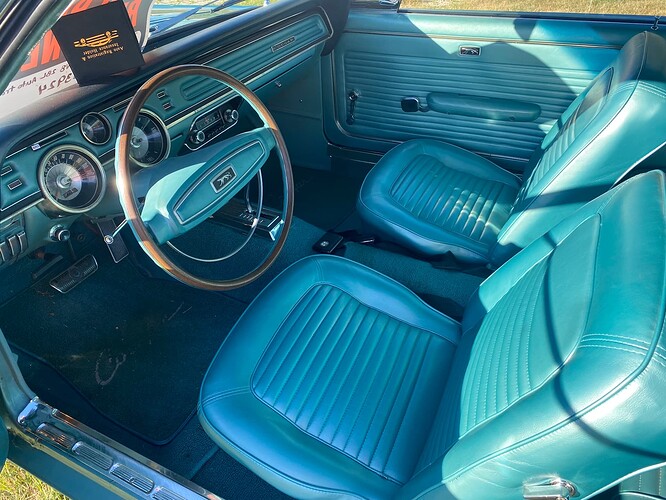 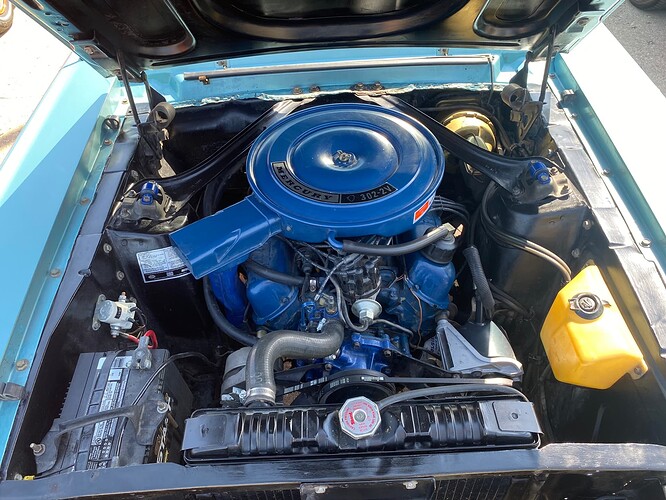 The VIN will tell you what engine it has. 68 standard Cougars built after October, or November, of 67 got the 289 2V. If it was ordered as a 4V, or was an XR-7 it came with a 302 (unless ordered with another optional engine).

Yeah. That’s how it is supposed to work but over in cougar net there is much talk about the period they switched from 289 to 302 - I’m pretty sure I have components from both motors in my car. Which is no big deal as they are almost completely identical motors - but 302s were built in 289 blocks and vice versa. The only real stamp you can trust is the one on the crankshaft which controls the stroke -The 302 has 3” of piston stroke and the 289 has 2 7/8”. That really is the only difference Between the 2 engines. That and 10 more horses for the 302.
I’m pretty certain I have a 289 block - the dipstick goes into the timing chain area vs into the block on a 302. I really don’t care but I feel silly at a car show explaining why my C code has a 302 2v sticker on the air breather. I’ve talked to or read comments from at least a dozen other owners with the same issue. June and July were very chaotic months for cougar production in 68. UAW strikes and inventory switch / shortages played a big part.

Congrats on the car regardless. Enjoy driving it.

lots of misinformation on this thread. First someone claiming that any car after Oct or Nov of 67 got a 289… untrue.

Second, back then 289 and 302 both used the timing cover with the dipstick tube coming through the timing chain cover. Later 302s had a dipstick hole in the block in the back driver’s side, I know for sure, but i’m def no expert on knowing when the change was or what models for sure if it wasn’t across the board all at once.

Initially for 1968 all Standard and XR7 Cougars had the F code 302 as the base engine. Following the strike Ford needed to raise prices or decrease cost to cover the additional wages and benefits. The 302 F code then became the standard engine only in the XR-7 and standard Cougars that were equipped with the Decore package. Engine code were part of the VIN and the engines were also VIN stamped.

So in this case it would be interesting to see what the VIN stamp on the engine shows.

Keep in mind that the C code 289 was a vanishing breed. If there was a warranty replacement of the engine it most likely would have been an F code 302 as that was what was available. The F code was also on the line when the cars were being built.

There is nothing about the F code that would preclude it being installed accidentally in place of the C code. The transmission is identical, all wiring harness connections are identical, exhaust manifold spacing was identical. Fuel line connections were identical. While very unlikely, it was at least physically possible.

Anyway, its a very cool car and a little mystery never hurts.

The mystery always intrigues me… my Marti report says mine is a manual steering car, but it has power steering. I find it hard to belive, although I have been told it isnt too far fetched, for someone to add all of the components to make it a PS car which it is now. And I just replaced all of the original components on it with new. It is 100% a power steering car and Marti report people say their reports are 100% accurate and if the report says its not a PS car, it wasn’t born a PS car. I just find it hard to believe. Although mine is a 302, 3.00 rear axle, manual drum, NO AC car that had the extra cooling package, etc… It did have Dealer Installed AC (under dash) but there is no way in heck the dealer who butchered up the car to install that is the same that added power steering and made it undetectable.

Back in the day there was really no way to add power steering but in such a way as to make it “factory” There were kits to add many options at the dealer level and Power Steering was one of them. You could look at the buck tag on your Cougar and it would tell if it was equipped with Power Steering. Can you post a picture of it?

Sadly they did butcher cars to put under dash AC in them. You would think that they used a hand held really pissed off beaver to chew the hole in the core support of my GT-E that got dealer air.

I should add that the Marti reports have always been an indication of how Ford intended the vehicle to be built, and of how the factory thought it had been built.

There are a couple types of discrepancies: things that were possible but unlikely, and things that were impossible. There are documented cases of cars getting options installed that were not on the build sheet. Typically these are minor trim items like bumper guards. However in one case it involved building the car out as a Boss 302 Eliminator. When it had not been originally ordered that way. This was however detected and noted on the build sheet that traveled with the car through assembly. It should be noted that the car was built as an Eliminator as it was impossible to construct it any other way with the Boss 302 engine.

Having worked on the Ford assembly line as a vendor the first thing you learn is that there are no extra parts. Everything is staged. Engine assemblies are in a cue that matches the cars coming down the line. You simply can’t jump past the correct one to get a different one. The engine assembly included the transmission and even the radiator when our cars were built. That engine had to mate up with the exhaust system and wiring harness. Things like AC hoses had to match up with the compressor already attached to the engine. This is also true of the power steering system. Probably the most amazing thing to see is the feed for wheels and tires. each corner is fed it’s own sequence of mounted wheels and tires. So you don’t even see what the is getting put on the other corners. Yet some how it always works out.

I’m farthest thing from an expert. I’ve just been reading stuff like this all over trying to figure it all out. 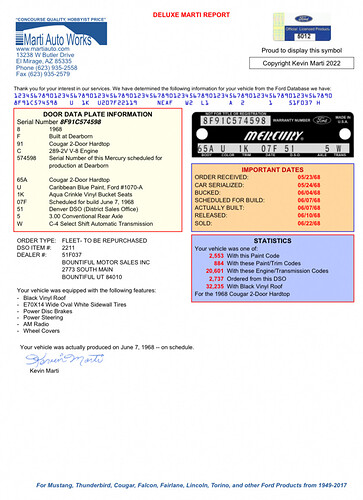 My marti-
I’m 1 of 884 of the most basic cougars ever. Lol.
One with code u paint and basically no trim. Haha.
I don’t care. It looks good !

Welcome! What a cool car!!! Looks sweet as can be!

Beautiful car. Where is the photo taken at the top? Looks like the old fort area in St Augustine Florida.

Have you visited www.CougarClub.org to register the VIN into the National Database? Looks to be a neat car to see featured in ATSOTC magazine

Beautiful car. No matter what engine it has, it needs a G1S tachometer!

but the pic looked so dope

I’ll do as you suggest !