Re: '68 Cougar “Daddy’s Money”
#10 Post 17 May 2021, 09:01
It’s your call but you will be money ahead to replace the tank and fuel line. New gas dissolves the shellac layers inside the tank. The shellac goes through the carb and filter but it paints the valve stems making them very sticky. It builds up rapidly. The valves begin to stick slightly open making it develop the lope you are hearing. Eventually if you are lucky it will bend pushrods. Or a stuck valve will be hit by a piston and all hell breaks loose. I have the bent pushrods and engine rebuild receipts from my experience.

Hello all,
My name is John and this would be my first time posting a question. I am unsure of the approach I am using. I want to explorer the above statement a bit further.

I believe my 1968 390 is in the first stages of this shellac working its way into my valve train.

Since 2006 I would just start it and let it run once or twice a year. Sometime around 2015, I started hearing definite knock. Not a rod but it was more of a sticking valve sound slapping when it finally let go. It is intermittent. You have to wait for it to happen. I scratched my head for a couple years and now I’m starting to believe this gasoline I’ve been putting in since 2006 has done exactly what has been said. In all, less than 3 gallons. I stopped running it. It seems to me the reason I didn’t drive it again in 2006 when I got back was it starting to run very strangely. Something I couldn’t figure out like that lope a mentioned above. 15 year diagnosis.

Question is, now what. Forget the fuel lines, fuel tank, pump, and carburetor.
From the intake manifold I have a running engine that has the first signs of gumminess. Is there a way to clean this out without taking the engine apart? Do I need to pull the heads / intake. Disassemble the valves?

Maybe a better question is; what happens to the shellac that has made it to the engine?
Does it ever disappear once you change out your old coated fuel system or does it never go away unless physically removed? Ho -humm
Thank you to xr7g428 and all that take the time to give me some advice. 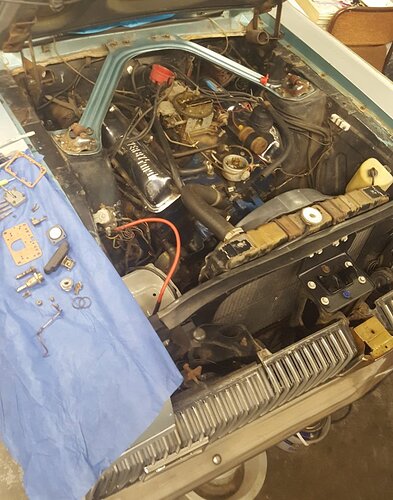 First step is to do no new harm. So new tank and fuel line is a good way to start. As to what is there already I would add some Marvel Mystery oil to the gas and do some serious finger crossing. Clean new gas is actually pretty good at cleaning up valve stems. After the top cylinder oil treatment I would use Chevron Techron additive as an additional detergent to help clean those valve stems.

Thank you, that is the type of information I am looking for. Once the tank is completely out, the low fuel sending unit will get shipped if it is rebuildable.
Flushing the fuel lines with a gallon or two of alcohol or maybe ethanol fuel to see if they can be saved is something I will try.
I have built well over 10 engines and stayed very far away from the crossing my fingers method with anything. But in this case, under controlled environment, I think it might be worth a try.

You may want to give seafoam a try. It can be added to fuel or oil and even sucked through a vacuum line as a decarb. I have got stuff through emissions just buy added to the fuel and running through the intake.

The issue with fuel lines is that water is heavier than gasoline. The fuel lines being mounted fairly low tend to be a place where water accumulates. So fuel lines end up rusting from the inside out. The problem is not so much shellac inside the fuel line as it is very fine rust.

I have very fine rust. Ok, thanks. Facted me into it. I have already changed the pump as part of the earlier years of diagnosis. That was a mental blunder. I mistakenly confused the Chevy pump push rod with a Ford lever action. I thought my 390 fuel pump push rod was sticking so I went and bought a new pump. Got home, opened it up and… bolt of lightning reminded me of the mechanical action confusion I had going on.
Right sound, wrong area. Wrong manufacturer! I’ll keep that one to myself.

An initial diagnosis may be removing the valve covers, and spark plugs then turned the engine by hand to see if any of the valves are stuck. Doing so will help confirm if whether or not the top end needs servicing.

Thanks Pirate, I will do that.
I remember the first time I change the spark plugs. It took me 2 days. I did six the first day and the other two the next day. Although that first time the emissions tubes were in the way. I wish they were still in the way but I was young and dumb and Wisconsin did not have emissions test in 1980 so…