Since I went in for the Heater Core, I let Don sell me a bunch of stuff from the “while you’re in there” section of the Video.
I Did The Light Diffusers, the RocketMan Tach, and LED Lights.
The Tach Needle is a bit “Orange” compared to the 51 year old needles on the rest of the gauges. As my Dad used to say, a man on a galloping horse won’t notice. 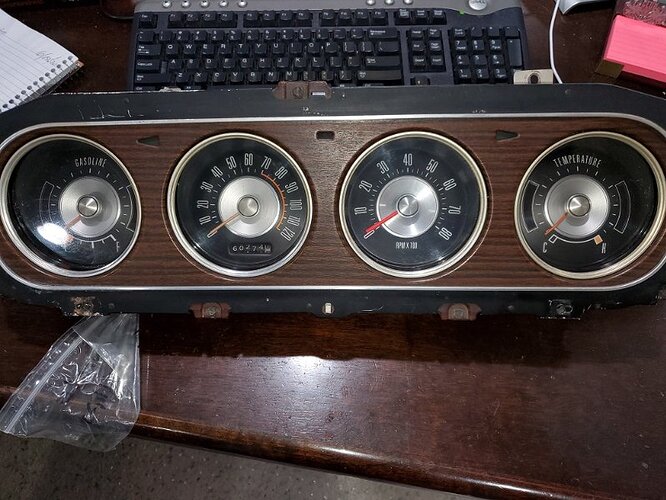 Now, Scott Drake, the maker of the light diffusers, needs his Butt Kicked. The diffusers come in packages of 4, there are 5 in the Cluster. Yeah you have to buy 2 packs for a complete job, anybody need 3 Blue Diffusers? <Rant Switch+OFF>
Bluestuff June 19, 2020, 9:32pm #2

Agreed on the lowest common denominator thing.
The gauges look great and thanks for posting that picture. I want to do the same thing with my tach.

We all inspect our cars and know every flaw. If you didn’t mention that needle color it could go unnoticed to the casual eye. As soon as you call it out than it can’t be unseen. It’s just the way it is. I did a heater core earlier in the spring. Everything is back in the car but I want to flush the coolant before I connect back the hoses.

You can paint the others to match using HP-FLRED-01 needle paint from HiPoParts.com: 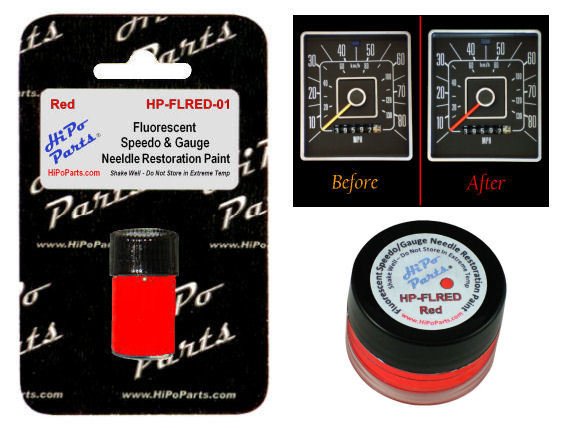 You can paint the others to match using HP-FLRED-01 needle paint from HiPoParts.com:

Yep it’s worth it to paint the other needles

I had a setback when I installed the cluster, NONE OF THE LIGHTS WORKED!. Now, I had replaced the headlight switch because the Dimmer function just went around and around. after I had removed the lower dash I found thing in bad shape. 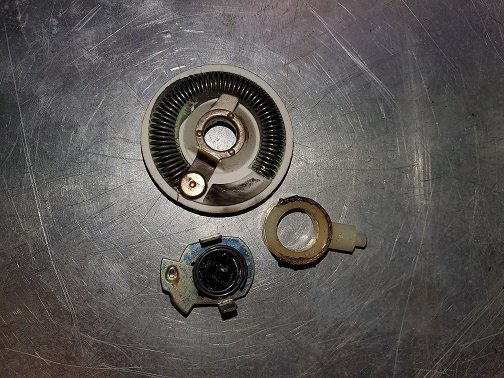 After chasing the wiring and reviewing the schematic, I did some searching of the Forum and found this little nugget.

“The Radio Plug is not Hot & Ground, it is Hot & Hot, one for the Radio and one for Illumination”
I looked at my pix from the heater core work…looky there…Power & Ground in the same plug. 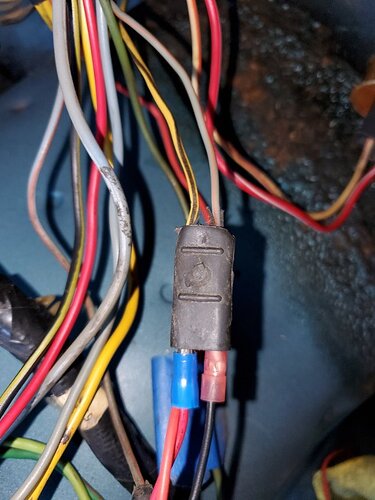 Radio Power connection s.jpg645×860 91.4 KB
Hmm, the glove box had a sleeve of the short fuses, the Radio itself, both fuses were blown (main and memory retention fuse). I’ll update when I get the root cause. I wonder how long the radio & dash light haven’t been working?
TheRktmn June 23, 2020, 4:09pm #8

Thank you Rktmn for that second nugget of Ford Tribal Knowledge. At least I haven’t re-installed the radio yet. Whoever installed it made that mistake (picture). Since the Radio is a Custom Autosound Model USA-1 (discontinued) it’s been that way for a long time. When I replaced it’s fuses in the Radio bench tested it and got static (no antenna) so I expect it is still ok.

The Root Cause for the Dash lights not working… Fuse #5 that tiny 4 amp sucker buried up there behind the pedals. I’m guessing Ford never expected any of the fuses to blow.

I prefer: “female connectors are always hot when energized!”

I prefer: “female connectors are always hot when energized!”