This is a bit premature since I don’t have a lot to show yet, but I couldn’t wait any longer. About 4 months ago I realized I had to do something even if it was wrong. So I started gathering missing parts and talked to the top machinist in my area about rebuilding the 427 for this car. I still don’t refer to it as my car even though my name is on the registration. To me it’s always going to be Dad’s car. 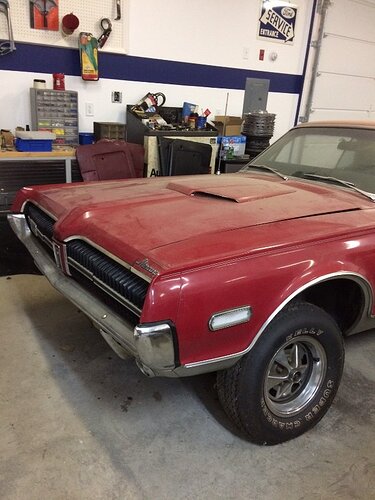 The block has been honed to perfection, new custom pistons were ordered. Among many other things I found a stock set of rods that the machinist reconditioned. I had already located a crank, the cam came from Comp along with new hydraulic lifters. I’ve been chasing numerous other OEM parts like a Carter X fuel pump, a production List 4088 Holley carb, an OEM fan blade, etc. I’m sure Royce is probably tired of answering all my questions. At the very least he’s going on my Christmas card list. Converting back to stock from a stroker engine is far more daunting than I thought it would be. 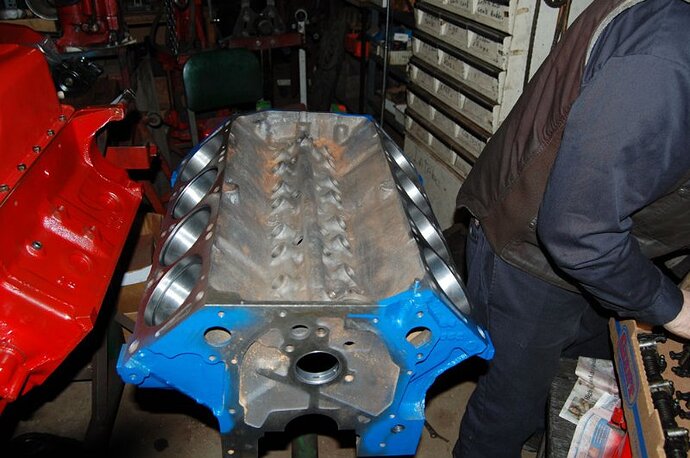 You can see a glimpse of the Y block from a T-Bird keeping the 427 company. And you can see the machinist, though he’s kind of camera shy. He does pretty well for 80 years old, just has a little trouble getting around. But the guy is like a walking encyclopedia when it comes to engines, racing, history, you name it. And yes he is a Ford guy. 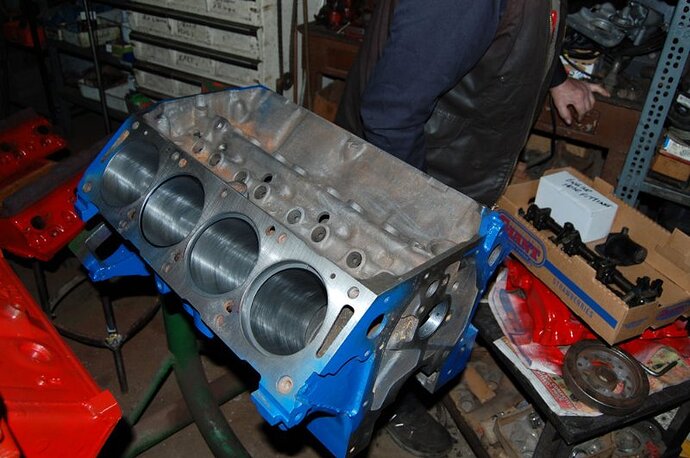 Looking forward to seeing your progress!

Wow, that is one BEAUTIFUL block!!!

Al,ya know if you’re Dad would have sold it to me the 30 plus years i pestered him you wouldn’t be having to do any of it now.One day around 1975 I was watching him from my gold 68 I had in high school go through the intersection up in town I had the stop sign he didn’t and probably because I was watching him he hit and broke it loose while rolling a 30 mph ,shortly after I had heard the engine blew and I would bug every couple years but he woul

Yup, that was 1975. The final remnants of the stickers finally fell off the windshield. To be clear though, it didn’t blow up. A sodium exhaust valve broke, probably from being too tight.

Believe me you weren’t the only one to try and buy it. Maybe the most persistent, but there was a pretty long list. The funniest was the little old lady who used to drive by the house on her way to lunch with her friends. She said it was the prettiest little car she’d ever seen.

I new it was the valve he had the head of one the times I bugged him, if I remember right it was #1 cylinder.

Not much new to report, waiting on a couple things from FedEx.

Here’s the crank newly arrived from being balanced. 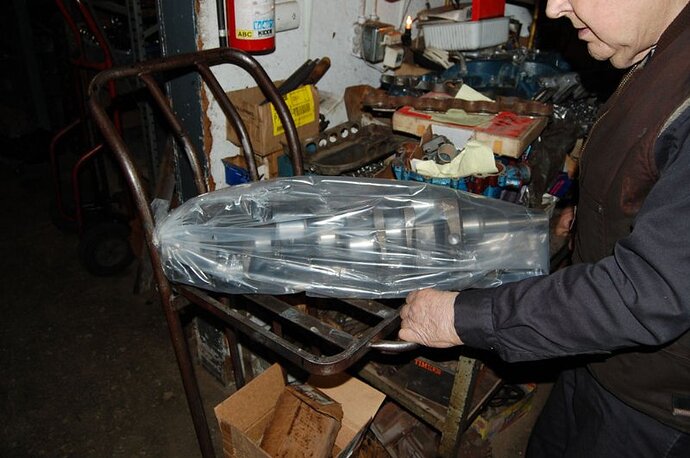 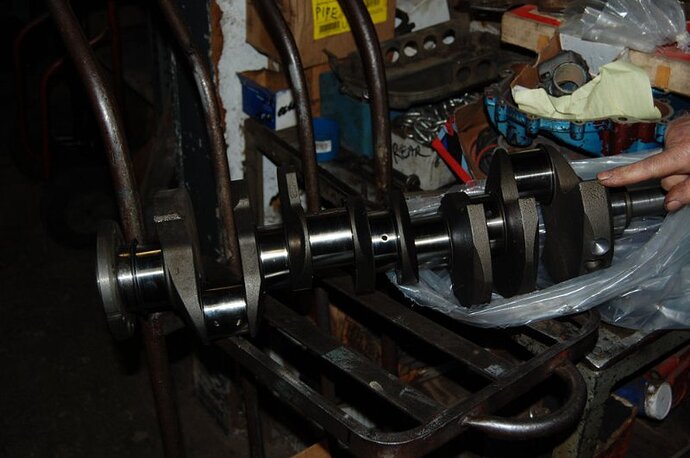 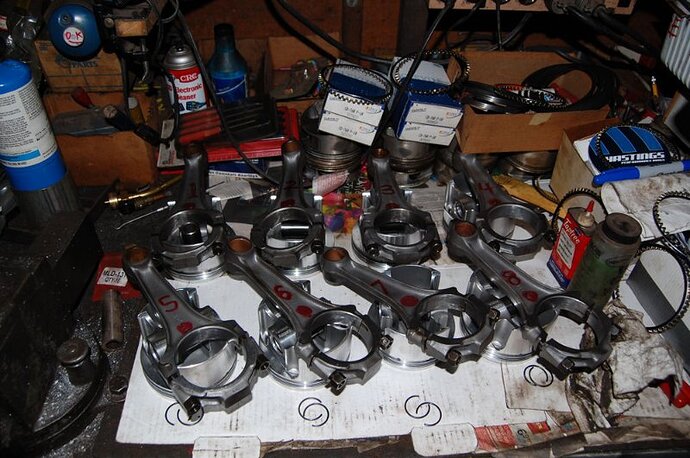 So being an early show car, was this the first production GT-E? Used in the brochures perhaps? The possibilities are interesting… what’s the history of it, or did I miss the full story somewhere?

So being an early show car, was this the first production GT-E? Used in the brochures perhaps? The possibilities are interesting… what’s the history of it, or did I miss the full story somewhere?

It’s not the first, it’s number 3. 500031 was the first, numerically anyway. I don’t have the build dates of the others, so I guess Mr Pinkerton would have to chime in about the actual order they were built. There were 12 all together. It’s possible it was used somewhere along the line in the literature, but hard to say for sure since it is exactly the same as one other.

I have shared the story, most likely on the other site. Perhaps I’ll do that again here before this thread progresses much further. Everyone likes a good origin story.

Everyone likes a good origin story.

::makes popcorn, sits down next to Andrew::

Pulling up a chair - put another log on the fire…

What did you do in the great war?

I can’t wait to see your progress. Cheering you on from the sidelines.

It would be neat to see the Marti and a little history of your father owning the car and history you had with the prior engine.

We all love a great story and history setting the stage.

Keep up the fantastic progress. 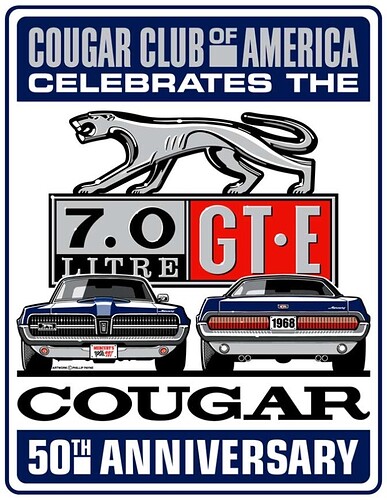 Al, I think Bill needs to do an interview and story on this car and publish it in the “next” Legendary Cougar Magazine. We’re all curious of its past.

Al, I think Bill needs to do an interview and story on this car and publish it in the “next” Legendary Cougar Magazine. We’re all curious of its past.

I’d be flattered by that. I’m working on putting the story together now. I figured if I ever finish the car maybe I’ll be considered for a Ride of the Month and Bill could use the copy. I just have to hope we all live long enough.

This car is worthy of anything that you spend on it, including time and / or money. Love to see it happening!