Headrests or no headrests?

The seats on my GT-E are in great condition, except the leather has cracked in many places and the seat cushions are disintegrating. The back cushions are really nice. The frames, tags, mechanisms, hessian cloth etc looks like they were made yesterday. I

have a complete new leather upholstery and cushion set from John’s Cougars. Just getting ready to reupholster. I also have an original set of 1968 headrests, headrest mechanisms and the chrome trim pieces. Mr Marti says that the car did not originally have headrests. Safety considerations say - fit headrests to prevent injury.

Not sure whether to fit or not to fit

What do you think?

Do it. Safety first.

Adding headrest is going to add some safety to the GT-E. I would base the decision more on if you like the seats with headrest vs non headrests. Re-sale valve, I don’t think it would hurt adding the headrests. You are already past the main factor which is the cost of purchasing 68 headrests. 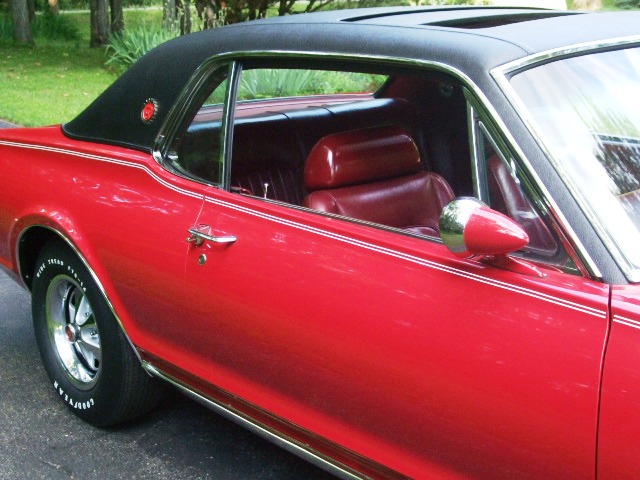 I agree with Neal --safety first-- and would add them. The change is easily reversible (though not necessarily inexpensive with leather), should a future owner have the desire to go back to stock.

Cool option that is very rare and valuable and of course offered at the dealer. Will look much better on the car than on the shelf in your garage.

Cool option that is very rare and valuable and of course offered at the dealer. Will look much better on the car than on the shelf in your garage.

Interesting, Don. Would a dealer have typically noted anything on the sales docs? (Or, I suppose it could’ve been added after the original purchase, in which case there would only be a service receipt.)

In the down position the reduction of injury risk is at best 10%. In the upper position the injury risk reduction goes up to 17%. I once develpoed video screens that were installed in headrests and we had to verify that the head rest would still meet the safety standard. In the process I had to read up on the evaluations of head rests… http://www.nhtsa.gov/cars/rules/regrev/evaluate/806108.html

That’s an interesting read Bill. The key here is the headrests look good on classic Cougars but for the best protection make sure they are adjusted correctly.
Steven

In my opinion. On a GTE, Original is best.

Great input. My bezels are very nice on the exposed area but the shafts are cracked and will need to be reinforced. Don lists the XR7 bezels as being 4" long rather than 3.5", is that from the base of the thread to the top of the chrome bezel or the shaft only?

Has anyone reinforced a set of bezels? I was thinking of aluminum tubes inside and out to reinforce and engage with the thread on the mechanisms,

Cut the broken part off and bond PVC pipe to the end and cut some threads.

Another question. My head rest cushions have some cracks in them. Is there any way to repair cracks in this type of material. Basically the skin is bonded to the foam like a dash pad. Has anyone sucessfully done this?

Another question. My head rest cushions have some cracks in them. Is there any way to repair cracks in this type of material. Basically the skin is bonded to the foam like a dash pad. Has anyone sucessfully done this?

Do you mean the skin material is cracked, or the internal foam / cushion?

I’ve been pondering the same thing re my steering wheel crash pad, maybe even arm rests. Here in the desert SW, it seems the heat has caused these type of foamed-interior parts deform --flare, really-- at the edges. I’ve been pondering careful removal of the original foam, re-shaping the skin, and re-foaming with the canned expandable foam commonly available at home centers. Haven’t tried it yet; would really prefer to experiment on a donor something that’s perhaps not even salvageable.

I would think, though, that headrest foam is lower density than the crash & dash pads, etc.

After a trip to the local plumbing department, here is my solution to broken headrest bezels.

BSP brass connectors fit snugly over the seat mechanisms. The threads didnt quite match but the steel males threads cut their own grooves in the soft brass, and I added some epoxy adhesive to fill the threads, very strong. Next the 13/16 threaded brass tube cut to length fit beautifully inside the chrome bezels- just enough for the threads to bite, but not enough to stress crack the bezels. You have to cut off any remnants of the threaded portion of the bezel to allow this to fit.

When I fit these to the seats, I will have the threaded tubes in place inside the seats, which will give me a reference point to cut through the new leather upholstery. I then just have to screw down the chrome bezels after the uphostery is completed. These will also be far stronger then the originals as they will be metal reinforced for almost their entire length. 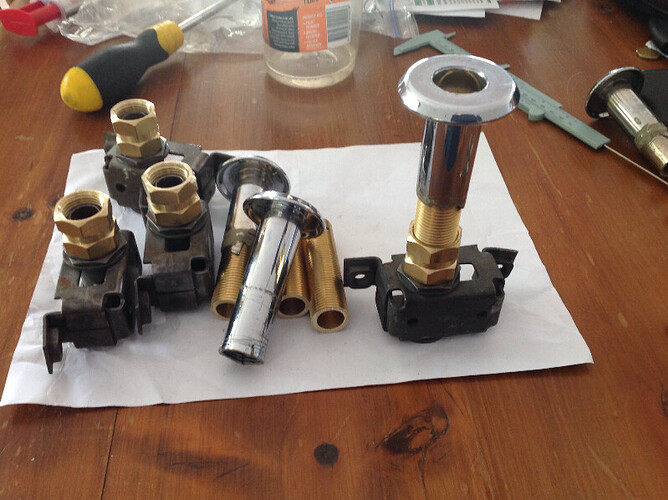 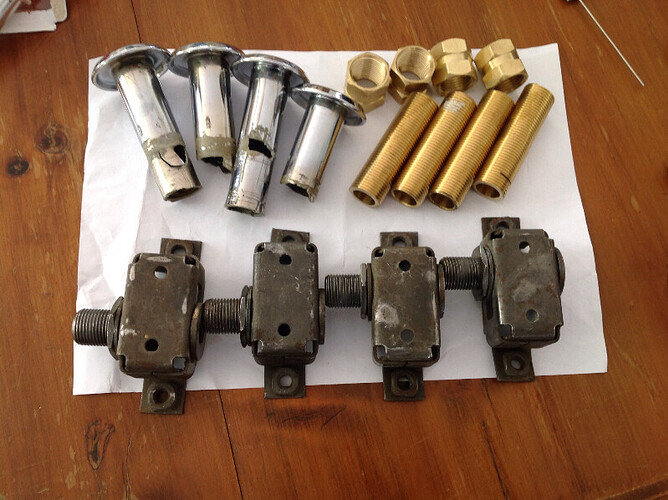