Surprised I never found this site! Here’s my ‘69 XR7 in its original setup and current. I picked it up from a lady who inherited it in 2016 from the original owner who passed in 2015, he was 85 years old. It was under a tree with a cloth cover, literally had to peel it off car.

It was built in October ‘68 at the San Jose factory to his specifications including AC, PS, AM/FM stereo and those door guards (which I almost threw away when I repainted!). When I saw those on the marti report I was pretty happy I kept them! The car has been in the SF Bay Area its whole life and mostly parked indoors until the lady who inherited it took possession.

It’s wearing its original color, dark ivy green except I didn’t keep the vinyl top, has black leather interior. I had the emblems restored also. The original owner was a single guy who never had a family and my understanding was he mostly kept to himself. I’m guessing he led an alternative lifestyle that was frowned upon back then, because of that the interior was flawless with wear only on the drivers seat. It’s like nobody has ever sat in the other seats. Other than paint and some mechanical work it’s pretty much all original. Pretty standard 351w/2bbl w FMX, it’s just a weekend cruiser for me so I’m good w that for now but do plan an EFI conversion one day for reliability. 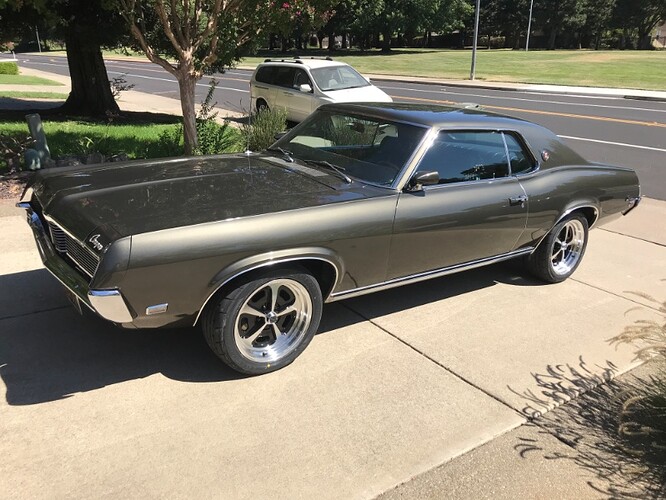 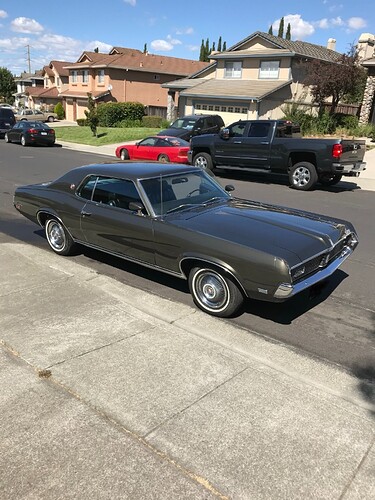 Good job that’s a nice looking Cougar. Have you gotten a Marti report on it? https://www.martiauto.com/martireports.cfm
Interesting it has the chrome base side mirrors.
Report the vin to the Cougar database if you haven’t already. http://www.cougarclub.org/registry.htm

Nice Cougar! It’s amazing how much a set of wheels can change the attitude of a car.

As for the chrome base racing mirror Brian referenced, I believe that would have been correct for early 69 XR7s on the driver’s side. The chrome base flows well with the door top molding unique to the XR7. The passenger side mirror isn’t original to the car but back in the early 2000s, one of the suppliers made a passenger side chrome base for people wanting to add a matching mirror to that side.

Thank you both for the welcome, yes, the chrome base is a early ‘69 thing. I never understood why that changed? Probably some cost cutting measure I imagine.

I did get the full elite marti report and the car pretty much mirrors it except the wheels and vinyl top. For the mechanicals only changes are the pertronix ignition and hydratech setup for brakes.