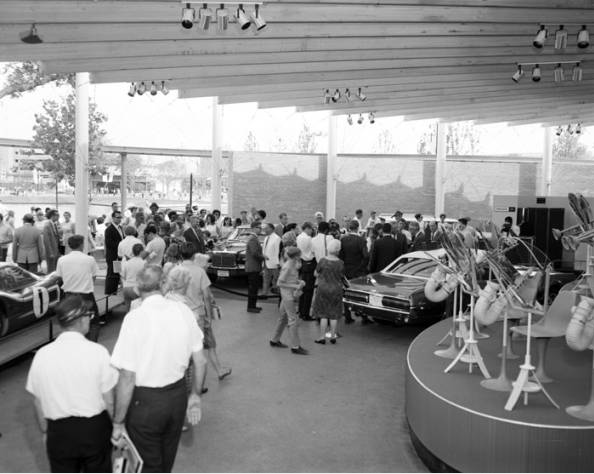 I have searched for years for a picture of the Hemisfair G on display but only ever found one very far away snapshot. You could tell it was a G by the sail panel emblem ( barely ) … but I found this shot today while navigating the UTSA library archives of the Hemisfair. I have searched that sight many times before but I some how stumbled across a different link, and now I have this!

I’ve planned to travel there, but have not yet had the chance… I’m going to try to get a copy of this for my documentation.

Cool find! You can just see the exhaust cutouts in the valance if you zoom in.

I have heard that my GT-E was also on display there before going to the Houston auto show. If any one has pictures of either I would really like to see them.

Bill,
Did your GTE come from Main Lincoln Mercury in San Antonio? Just curious. Kevin Marti provided a list of cars ordered for the Hemisfair, and there were 2 identical G’s ordered for display. From what I have seen, the G’s seemed to be moved around a lot and missing completely from most photos. It would not surprise me if they substituted the GTE as well.

Also, Philip Payne sent me this note a few weeks ago from the CCOA “Cat Tails” from 1987. The guy got the color wrong ( it’s Madras Blue ) but no doubt he saw the car on display. 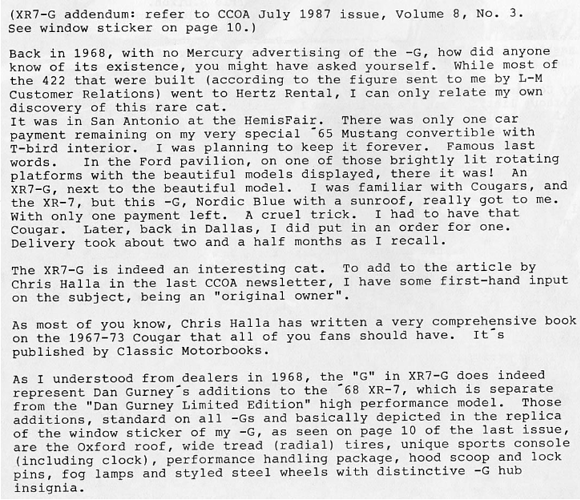 A fellow DCC member was losing his storage space and was getting rid of his stash of old ATSOTC magazines so I took them off his hands.

It has been a lot of fun reading through them - I was surprised to see this first hand account of Tony’s Hemisfair G!

And yes, you can definitely see the G exhaust tips and even make out the side of the hood scoop.

My GT-E was scheduled for build February 23rd but pulled forward to February 8th. Hemisfair ran from April 6th to October 6th. I do not know the dates of the Houston Auto Show but the original owner told me that he saw the car at the Show and made his deal with them to take deliver following the show. The Marti shows a sold date of April 21st of 1969! The car was ordered as Retail by Dave Snelling L-M on Kirby Drive in Houston.

My G was built Feb. 28th. The second G was built March 11th. My car did not remain on display for the entire Hemisfair as it was sold to the first owner Sept 30th.

I have to believe that if my GT-E was at Hemisfair it couldn’t have been there very long, maybe only at the opening. Maybe it was only there until the G car was available to fill the spot if at all.