1968 Cougar XR7-Okay, my car died, figured it out when I got home it was the ignition. When I pulled the ignition out it was old, looked more like a mustang ignition, had electric tape holding it together. pig tail was melted pretty serious. So I ordered an original Motor Craft ignition with pig tail on eBay, Decided today I would put it in. Wires are colored coated, but his new ignition has one extra wire, red white. Where as the other from what I could tell did not, but it did have two wires coming from one accessory terminal. and then there is one wire a heavy gauge one that came loose from some where my new pig tail has one. But the old one came loose and I have no Idea where it goes. It is a positive wire, as big as the main yellow wire, but it is black with green stripe. As I said I have no Idea where this six or seven each wire came loose from coming from the ignition. Where under the dash does it connect. Because I know it has to be some kind of power to the fuse panel, because I am no getting any power to the fuses except the bottom right. I can route power from this new wire to a wire I know provides hot, but that’s bypassing the panel. as I said this is the heavy black and green striped coming from ignition pig tail. Please help. thank you.

Sorry, Thought I did. 1968 Cougar XR7 302. Factory. The car is not getting any power to coil, blower will not come on, wipers, no turn signals. Interior lights work, head lights work, tail lights work, emergency flasher works, Car turns over, just won’t start. Radio doesn’t work. I can bypass like I said, then my radio works, everything does, but its reversing the electrical flow. But car still doesn’t start, unless I hot wire it, +battery to + coil. That Black and green striped wire has to be the problem. One end went to the ignition, the other was soldered to something under the dash. Its driving me nuts.

You might want to wait until someone with a 68 wiring diagram responds, but on a 69, the black w/green wire does go to (come from?) the fuse panel. Two other wires splice into it (purple which feeds power to instrument cluster, and orange w/yellow which feeds wiper switch). Again, this is '69 not '68. I don’t know if there’s a difference.

The red/white wire that’s “extra” is truly extra: that switch is used by other models than Mustangs/Cougars and is not needed. Leave it alone.

For a non-tach dash configured car, there’s a pink resistor wire and a green/red (sometimes a red/green) wire tied together. Sometimes the replacement connector only has one wire coming out of that position so tie both of your original wires to this one. The other wires are red/blue (for starter/neutral safety switch) and a violet wire (brake MC switch position).

Appreciate the info, I have the pig tail its fine, but where the heck does the heavy gauge black green striped wire connect under the dash, that is where is came loose, It appears to have solder on that end. But I have no Idea, I have looked and looked. Mine has a tach.

Where is the splice, Is it in the bundle of noodles, or at a block, in the steering column? Before I take this to a shop, I would rather pay someone for a good picture and information that could help me help you.

It sounds like you have two separate problems. Randy (Midlife) is the man to sort out your accessory issues.
Does teh engine fire when turning over, then die with the key in the ON (run) position? If it does and since the car starts when you hot wire it, I would try bypassing the tach and see if it runs: http://www.classiccougargarage.net/showthread.php?tid=86
Unfortunately, I have not found a good '68 XR7 wiring diagram. If anyone knows a source, please post it for us.

You know what it does, it act likes it wants to start then dies, I will try the jumper. But I still need to know where the heck that black and green wire runs to from the ignition, what was it soldered too. Man no one in my town, services classics cars, I know what they know, when it comes to the under dash electrical, not even the best Shops here want to touch it. Thanks for that Information, I will try it tonight.

On all three diagrams I have - '67 std, '67 XR7 and '68 standard - the blk/grn wire goes from the ignition switch Acc post to the fuse block.
It feeds two fuses: 14A ACCY and 14A HTR.
Between the ignition switch & fuse block another blk/grn wire is tapped off and goes into the cluster connector, then up to the Constant Voltage Regulator on the back of the cluster. The CVR supplies power to the Temp, Oil and Fuel gauges.

… But I still need to know where the heck that black and green wire runs to from the ignition, what was it soldered too.

As mentioned, the Black/ Green stripe wire supplies the fuse box (297A) from a junction which branches off the (297) Black/Green wire. This is output from the ignition switch as accessory and steering column/turn signal power (8A), among others. It has a loop terminal and is screwed to the end of the ignition switch.

It would not keep you from starting though, just put out the lights and such.


If you did not have a TACH, below would describe the ignition and starting. However, the TACH is inline for this circuit, may have different wire colors and branches. It has caused problem for many of this nature as others will probably tell you. Jumping across it (bypass) may help as a test also.


So, for the sake of covering the basics, I will talk about the non-TACH part of the circuit, maybe it will help your diagnosis.

For the ignition circuit, keep this in mind:

Red-blue is STARTER signal (crank) Red-green is ignition run (after pink resistor wire at the ignition switch.) Red-blue is routed to AUTO trans for neutral safety lock-out (your cranking, so no prob. there)

It (ignition switch) is supplied by the Yellow wire (21), that’s your HOT lead. If I was to hot wire your car UNDER the dash, I would attach that yellow to the PINK wire and touch them to the red/blue wire momentarily to crank the starter. The coil would be supplied from the yellow wire feeding 12v to the PINK which attaches to the RED/GREEN.

However, the car supplies the coil 2 different ways between START and RUN. During RUN, the above circuit is correct.

During crank (START position), the starter relay is providing coil voltage (not the ignition switch) via the brown wire, when it’s contacts are being closed during cranking. That brown wire goes down and attaches to the red/green coil wire at the junction where the resistor wire meets the wire going to the coil.

I use the hot wire scenario to demonstrate function, best to check the coil for voltage with the ignition switch in the run position (car not running) for 12v (Red-green wire at coil). If not present, check the resistance (continuity) from there to the BROWN wire on the Starter relay, and also from there to the pink wire on the ignition switch. There should be near zero resistance on the brown, minimal resistance on the pink, but not an ‘open’ reading on either.

If they all check I would say it is the ignition switch itself.

If my thinking is correct, the under-hood hot-wire would bypass the TACH circuit for an isolation test. It should give the voltage a straight shot to the coil. You could even run the jumper right to the coil, rather than the brown wire on the relay, but both methods should be informative.

However it could be effected by a short in the TACH circuit, so disconnecting it may be necessary during the test.

that looks like a mustang ignition, cougar is different. Yea I can jump it by hot wiring it. But I agree this wire has to feed to fuse panel. That is what I am trying to figure out, I know where it comes out of my ignition, lets call this point A. I cant figure out where point B is. But I will, and when I do, I will make videos for you tube. It came lose at the unknown B. point. and I’m sure it was soldered. The motor will turn over, starter working, Just no power to my accessories. and to the coil. Last wire, and I’m doing a pro job, soldering my wires together, heat shrink, etc. I called around this morning for a shop, the closet shop that will take this car, and guarantees it will be right, is three hours away. So six total. I don’t want too. Okay, this evening, under the dash, in a tight spot I go. I tried gauging the length to figure it out, I pray its not behind the fuse panel.

that looks like a mustang ignition, cougar is different.

That is my '67 Cougar harness hanging on the closet door before I re-installed it, and the switch is OE keyed to the car, so please settle down and take me seriously for a moment. I learned signal tracing 30 years ago as a jarhead, and it’s been my career ever since.

That black/green wire runs to the wire junction, wrapped up tight in your harness by the fuse block…then feeds several circuits, one is the fuse block, one is the steering column…none of them are the ignition circuit.

I’m cool, but mine is OEM replacement Motor craft, and looks different. When I check it this evening if this is it, I will pay you some, as I would have to pay a shop. Thank You I looked at the picture closer. Here is a picture of the type pig tail I removed, but it was pretty much melted. It had, had it. The new Motorcraft replacement is pretty much the same, except it has an addition, white with red stripe wire, and the two wires that are linked together are not, which I just tied them in together. Hey I’m listening, learning, absorbing. Again thanks, when I get home, I’m going straight to the car. 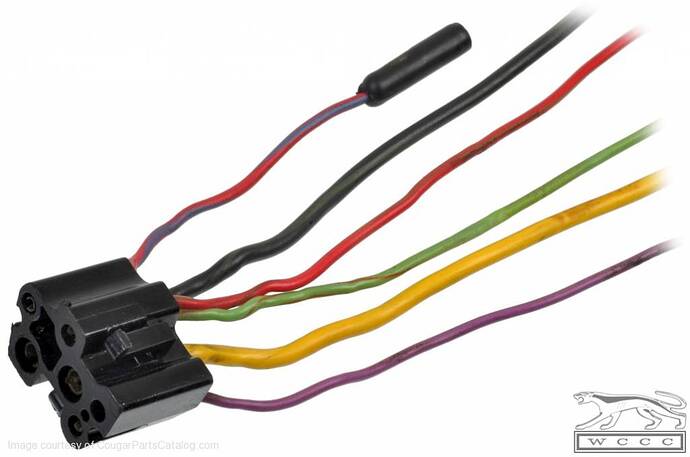 The OP’s car is a 68, and the picture of the ignition switch shown earlier is from a 67: two different animals. Nevertheless, the wiring for the thick green/black wire is very similar.

I can refurbish your harness for a nominal fee if you’re willing to let it out of the car for about 2 weeks, including shipping. My suspicion is that the factory OEM splice broke (fairly uncommon) and someone tried to make their own splice somewhat unsatisfactorily. Search for tape that has adhesive on it (the factory was adhesive-free) and I suspect your problem area is located underneath it.