I saw on the G registry a Black XR7 G owned by Chris Noyer. Is he on any of the cougar sites at all, It would be great to see some good pictures of his car. From the couple of pictures that are on the net of this car, It really looks good!

It is a great looking car. Chris deleted the vinyl top and added a 4 speed, plus the rare Shelby Cougar intake and oil pan.

It is a great looking car. Chris deleted the vinyl top and added a 4 speed, plus the rare Shelby Cougar intake and oil pan.

Now that you mention it about him taking the vinyl top off, there are no other “G” cougars with vinyl delete from the factory is there?
Does he show up on the forums at all? it would be cool to see more of this car.

Edit: Fixed how I said it.

All XR7-G’s came with a vinyl top originally. 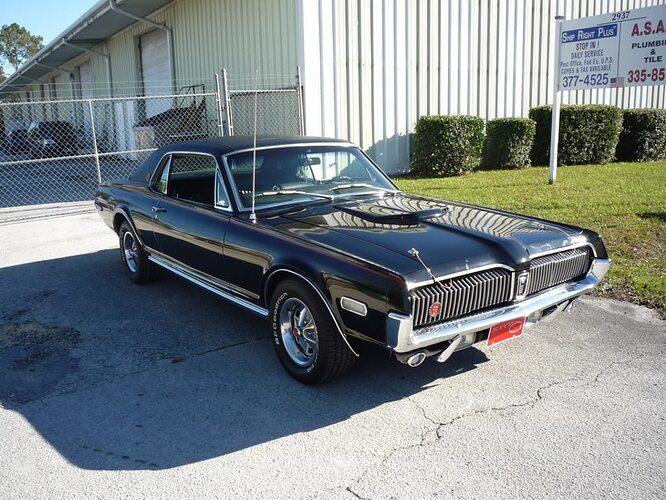 Is this yours Don? looks great!

these are the only two pictures I have ever seen of Chris’s car from the “G” registry site.

That’s what I’m going for.

Here is the factory black G owned by a DCC member Frank Paty.

These photos are by Kimber Corbitt and were cleaned up by me. Paty’s G was featured on the cover of the NPD Cougar Parts catalog and these were taken during that photoshoot.

Here are some more pics I have on file.

Don’t remember much about them - they are saved in a folder I labeled “Triple Black G in North Carolina”.

Also, if memory serves, I think the G that Mercury gave to Dan Gurney (and which I think he refused) was a triple black S code sunroof G.

Thanks for the pictures, the red pin strips are a little to bold I’ll probably go with a light silver I love the triple black cars , I definitely can’t do the original diamond blue, thanks again.

Is this yours Don? looks great!

No, Mine wellington blue.