I have a quick question for those more knowledgable in the dark art of electricity. I’ve been having an intermittent charging problem with my '68 Standard 289 w/AC. It’ll be perfectly fine for a bit, and then at random the AMPS light will come on. It will go out and come back on at random intervals with no correlation to the use of lights, accessories, the fan, etc. I got a cheapie tester that plugs into the cigarette lighter socket, which confirms that the voltage is dropping below normal when the AMPS light comes on.

I thought I had it figured out when I inspected the (original) alternator wiring harness and found that the two small wires that ground to the block had broken insulation and felt crusty. I replaced the harness with a new one and made sure the block ground was clean bare metal. At first I thought that solved it, but the problem has reared its head again. Where do I go from here? What else could it be?

The alt. itself is just a generic reman from the auto parts store, I forget if it’s O’Reillys or AutoZone. Voltage regulator is a new(ish) solid state unit. The wiring to the VR is original and a little hard but seems like it should be ok.

I’ve had a lot of trouble with the connections breaking where the wire harness attaches to the voltage regulator plug. A replacement plug available from any decent auto part store can be spliced in to fix this issue.

I had that issue once before. It wasn’t the regulator, it was the garbage AutoZone alternator. If you have an independent alternator shop around (almost extinct now) take it there and have them load test it. In my situation, the AutoZone employee didn’t know how to work their tester. Haven’t shopped there since. Anyway, my point is don’t exclude the alternator.

I’ve had a lot of trouble with the connections breaking where the wire harness attaches to the voltage regulator plug. A replacement plug available from any decent auto part store can be spliced in to fix this issue.

This has been my experience as well. Almost every VR plug I run across that I have to refurbish requires either re-crimping the VR pins or replacing the pins outright. This plug is very prone to corrosion, as it is exposed to the elements/environment that is not all that forgiving.

I had an alternator that kept load testing good, but wasn’t charging up to the correct levels. Turned out to be a bad diode. Might try to get Autozone to swap you under warranty just to rule it out.

Good suggestions guys, thanks. One other thing I just noticed is that when the AMPS light comes on, the engine RPM increases a little (at idle).
I did notice that the VR plug pins looked a bit crusty, I’ll try to clean those up. Will also take the suggestion of getting the alt tested.

That makes perfect sense because the alternator requires a couple horsepower to operate. If the alternator is not producing power the engine is going to idle faster due to decreased load.

So would that for sure be an alternator problem, or could crusty wiring to the VR cause the alt. to “turn off” intermittently? Not sure how the two work together, to be honest.

Well, I think I had a couple of things going on. I’m close to getting things back together for a test run, but in the meantime here’s what I found.

I removed the alternator to take it into AutoZone to get tested and exchanged if needed. As I took it out, I noticed that one of the ring terminals on the brand new wiring harness had broken off / separated from the wiring. So that very well could have been why the issue persisted. But also, I took apart the pins in the voltage regulator plug, and they all looked like this: 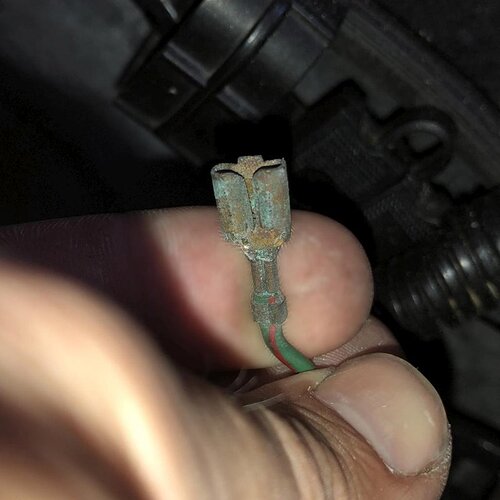 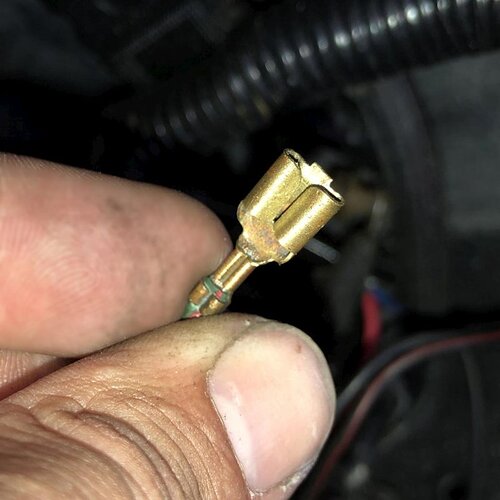 andrew project (1967)-1028.jpg800×800 65 KB
So addressing that sure can’t hurt. And yes I did blur out my fingerprints because they were way too clear and this is the internet

Next step is to replace the alternator wiring harness again (luckily WCCC let me exchange it) and put in the new alternator from Autozone. The old one actually passed their test but they went ahead and swapped it out for me anyway. I know I should probably get a better alternator but it was free to exchange so this should get me by.

Fingers crossed that my charging issue will be gone after all this. Will let you know how it goes…

Every time I have had an actual alternator problem it has never been intermittent. I bet fixing the wiring issues fixed the problem.

So would that for sure be an alternator problem, or could crusty wiring to the VR cause the alt. to “turn off” intermittently? Not sure how the two work together, to be honest.

Isn’t there a grease you can put on electrical connections to prevent that?

Crusty voltage regulator pins are extremely common and I usually cut off the terminal and crimp on a new one if it is bad enough.

Dielectric grease makes connectors easier to pull apart and I put a touch of it under body ground connections.

I’m dealing with a failure to charge on my XR7. Will be pulling my alt harness and testing it this evening. Eager to see how your repairs go.

Dang. My problem is still there. Fresh alternator, fresh alt. harness, cleaned VR plug pins, cleaned block ground. What the heck? Next thing is to try swapping out the VR. I even scuffed the paint where the VR mounts to make sure it was grounded to the car, if that even matters.

The VR I have is a solid state one I got from the auto parts store. Initially, I was going to swap out the cover panel to a more original looking “Autolite” labeled one, so I drilled out the rivets for the cover. It still didn’t want to separate, so it looks like I drilled out a third rivet towards the top / middle of the unit. I’m thinking that was some kind of ground lug and I shouldn’t have drilled it…

So. As I’m writing this, I just went and swapped out the VR with one of these. Just ran it for a minute but so far it’s looking like that may have solved it… will have to do a longer drive to know for sure.

I’ve had issues with new voltage regulators. If you’ve already addressed that my apologize for not reading the whole thread in full detail. Since everything else seems to have been addressed you might check or recheck with another known good regulator.

Yep. Having driven the car a couple times now with a new voltage regulator, that seems to have solved the problem. It didn’t hurt to address the other things though.

It wouldn’t hurt to put a little dialectric grease on those connections but good job cleaning those connectors.

Maybe don’t drill holes in this one. lol

Maybe don’t drill holes in this one. lol

Yeah… things that make you feel like an idiot…