Leave the vinyl off?

I really like the look of a non vinyl roof car. How bad would it look if I just left the vinyl roof off when i get to paint and body work? I dont really want to weld the holes in case someone wants to put it back on later down the road. Would just having the trim installed look as bad as my mind imagines it does? These are the things i think about while im bored at work.

I vote for original vinyl top. I too prefer the no vinyl look but will be putting the parchment vinyl back on my 68XR7.

Back in the late 90’s when I did this Cougar I did not put the vinyl roof back on and kept the trim. I did one back in the early 80’s that I did fill the holes on. If your not going for an Eliminator clone look then I think I’d keep the trim and put it back on the car. If later you decide you want the Vinyl top it would be easier not having to drill holes in your nice paint.

It sounds to me like you’re looking for opinions. So here’s mine:

It’s an all or nothing situation. Either yank the top AND fill the holes, or put another top and trim back on. Leaving just the trim tells me that shortcuts were taken.

Now, a way around it would be to keep the trim and paint the roof a contrasting color or even go two-tone. If that approach was taken, I’ll give it a free pass.

I’ll put my spin on the “All or Nothing” approach. If you do the vinyl make sure that the material and kit you use matches the factory closely. It seems folks are more likely to spot non-OEM seams etc… If you delete then have it resemble the factory. I’d probably start without and drive it that way then decided later on to add the vinyl. Base color choice and the contrast is makes has a great influence on how the vinyl looks IMHO.

What do you prefer? Don’t worry about what the next owner may or may not want unless you’re building it to flip.
I vote for smooth top and no trim. Never been a fan of vinyl tops except on convertibles.

I think it’s personal preference. My car didn’t have a vinyl top but I like the way it looks so I drilled the holes for the trim. I’m still deciding on putting a vinyl top on or just painting the top white. If you were going for one color I’d probably lose the trim and the holes. You could always make a template and if you ever wanted to put it back on drill the holes. I made a template from a junkyard Cougar I found in Fresno with the trim. Put the template on, drilled the holes and it all worked out.

I’m not crazy about vinyl tops but Lime Frost can be kind of overpowering. Either way don’t worry about the next guy, do what you like.

It sounds to me like you’re looking for opinions. So here’s mine:

It’s an all or nothing situation. Either yank the top AND fill the holes, or put another top and trim back on. Leaving just the trim tells me that shortcuts were taken.

Now, a way around it would be to keep the trim and paint the roof a contrasting color or even go two-tone. If that approach was taken, I’ll give it a free pass.

I will second this opinion. The only other option that I would offer would be to leave the vinyl off, paint the trim the same color as the rest of the car and then reinstall the trim. At least that way the trim would not stand out, at least not from a distance. Personally I would never do this to a car but it could be an option if you really want a solid colored car and do not want to fill the trim holes.

It’s a lot cheaper and easier to re-drill the holes if someone wants a vinyl top later on than it is to weld them closed and repaint later on. I’d fill them.

Just asking in case some day…

What do you do with GTE getting restored that had a vinyl top?
Too rare to mess with?

I think I’m going to leave the vinyl off. First it’s a real pain to install and I think it’s a much cleaner look without it also, I plan on running poverty caps on steels so, I don’t think a vinyl roof would go with that.

I think it all depends how bad the roof is. Was there a lot of rust repair? Yes. Then put the vinyl top back on…it will hide any possible bad body work. If no rust repair, fill the holes and say good bye to the vinyl top. Do what you always preferred, you’ll regret it it later if you don’t.

It needs a little rust repair. Drivers side lower rear corner about a 4” section and the drip rail area just above the drivers door has two small (1/4”) holes. 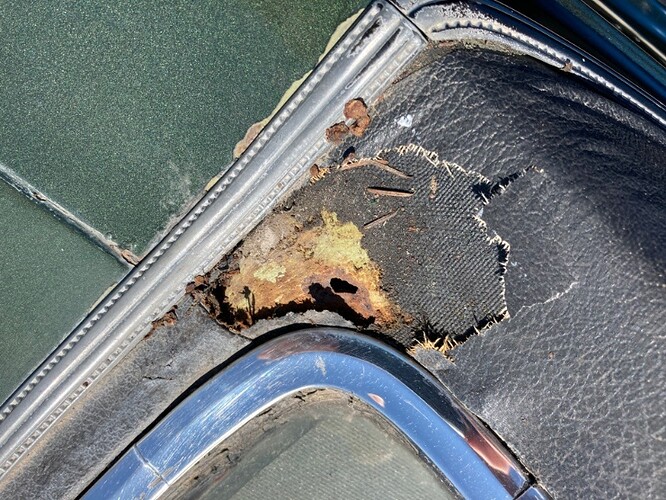 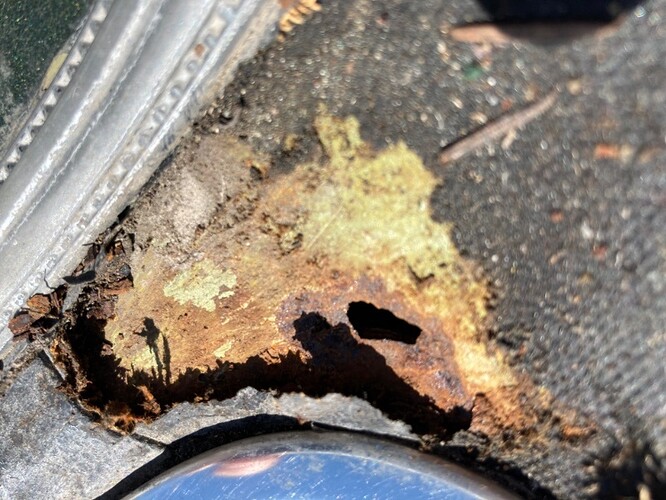 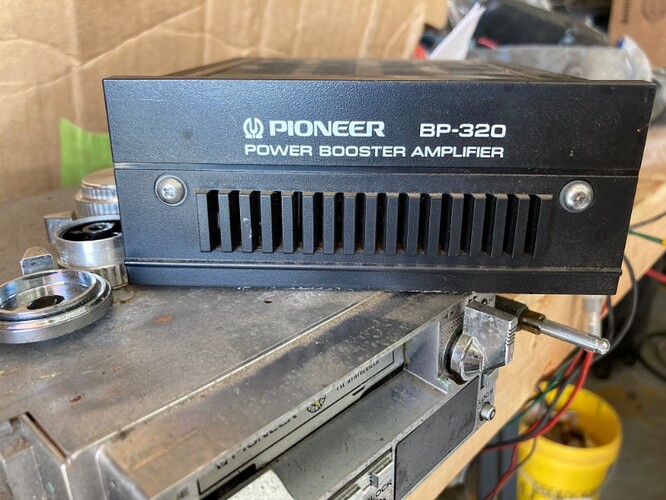 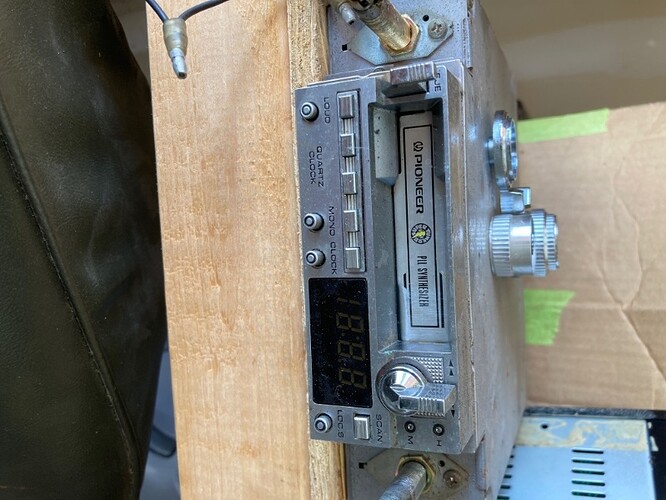 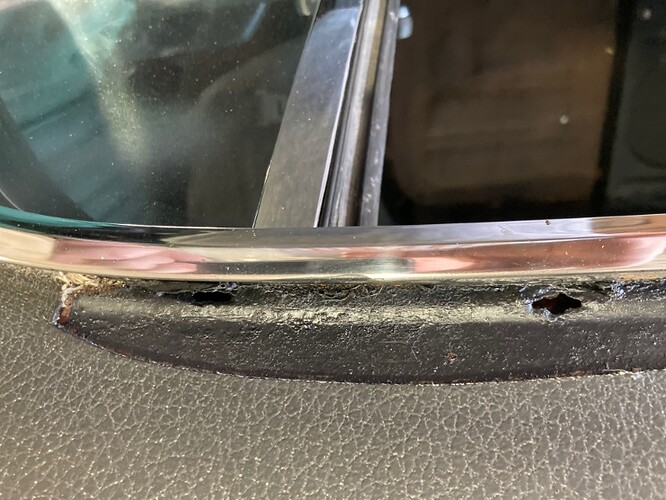 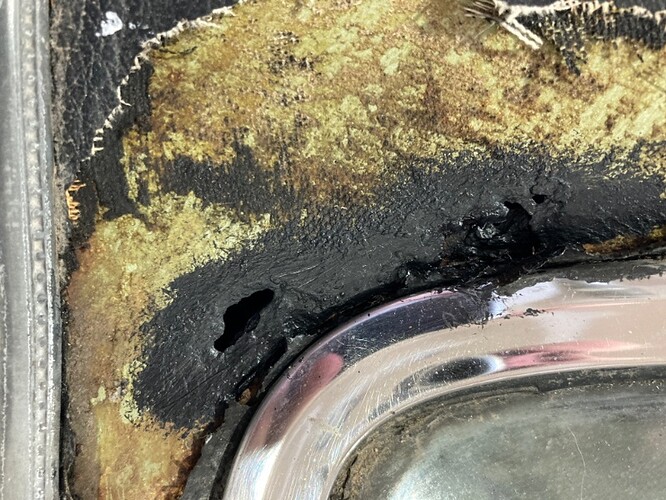 Found that little pioneer amp tucked way up in the dash when I was taking the radio out. I didn’t know they made them that small back in the 70’s.

Vinyl can look nice if it’s in good shape but I’ve had people ask me how bad the roof was rusted even though it’s not.

People think you’re hiding something & in theory that could lower economic value.

I prefer it without the vinyl, but I currently have one with a vinyl top in good shape and don’t have immediate plans to change it. Not my preference, but I think they look great if they are in good shape. If you need to do any rust repair might as well lose it. If its your preference I’d say lose it unless its a rare cat. Whenever I get around to repainting my one '68 with the vinyl top I’ll remove the vinyl and go solid and fill in the holes. All comes down to preference, but unless its a rare car and came that way, I prefer them without vinyl. I’ve owned a handful of cougars over the last 35 years and several of them had vinyl tops and I never minded. In fact, the one I had that was “traffic signal yellow” looked great with its contrasting black top and black rocker trim. Ultimately, its what makes you happy

That’s a good point. I think color has a lot to do with it as well.

I think the brighter colors look good with a contrasting black vinyl top. I know of two other Cougars painted with my exact same color but without the vinyl top and I think it’s just too much color.

White tops look great on certain other colors such as various reds and blues.