My Cougar keeps stalling at random

I’ve had a problem with my cougar for a while now.

The car stalls at random. It has happened at stop signs, at sustained cruising, during acceleration and while going downhill or breaking with the gears. The most common times it stalls going downhill/breaking only on the gear. It also stalls after starting the car if I dont keep revving it to keep it alive. It has also happened while standing still, retracting the roof and then it will stall just as I turn on the headlights.

What I have done:
Replaced all spark plugs (no effect on the stalling)
Replaced a vaccum hose going to the manifold which had a crack, seemes to run a bit better after that.
Tried to adjust the idle speed, but the screw didnt seem to adjust anything

Any Ideas on what could cause this or what I should do next? I have the luxury of working at a dealership so I have access to a professional garage (although I dont work as a mechanic).

Thanks for any suggestions!

If it’s an XR-7 the tachometer is suspect since all current to the ignition goes through it.

It sounds more like a lack of fuel though. Likely the gas tank is plugged with rust. Very common. Only way to find out is to drain the gas and then remove the sending unit so you can look. New tanks are cheap. Bill B rebuilds the sending units. The reproduction sending units are trash.

The fuel filter is screwed into the carburetor. If you said what kind of carburetor it was I could post a picture of it.

Not an XR-7, but yes I believe there might be some sluge/rust insider the tank. The car looks pretty good underneath but it did spend quite some time standing still before I bought it.

Only thing I know about the carb is that is says “Holley” on it. I have a picture of where the fuel line goes into it. 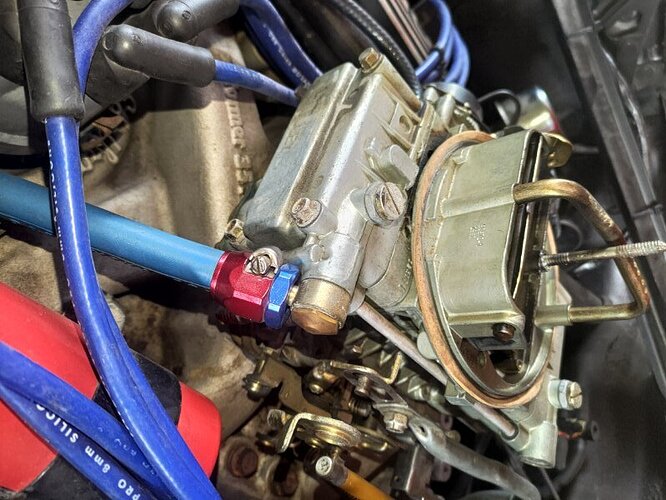 That’s an aftermarket carburetor. It should have an inline fuel filter between the fuel pump and the carburetor.

Here is a pic og the rest og the hose going i to the pump at the bottom, I really dont see a filter. Maybe it was never installer properly, then I guess I should i stall it between there. 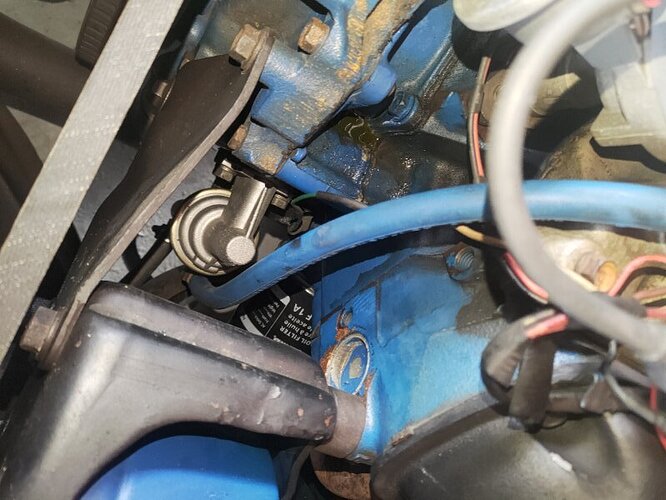 Use a metal fuel filter and while you are getting carb cleaned/rebuild to get the crud out, you might want to convert that fuel line to a metal one as well. And if you don’t want to keep chasing fuel issues then put a new tank in too.

I will do that! For a new tank, would it be the same tank og its fitted for 1970 Mustang? Parts is expensive to ship from the US to Norway but I can get a new tank for a Mustang easily since its available in the country.

There’s no “might” about replacing that line with metal tube. One engine fire will ruin your whole day.

Have you checked the ignition coil? A dying or cheaply built one can cause all sorts of hilarity.

When was the last tune up?

If you’re running a PerTronix ignition coil, are you getting 12 volts for it? It’s not supposed to run at reduced voltage like points do.

You can add an inline plastic translucent fuel filter before the fuel pump. That way you can see how much sludge is actually there before replacing the tank.

I had a similar problem

See Thread. Turned out to be the Ignition switch.

That’s how Holley makes the vents on a marine carburetor. There are holes drilled in the top of the tube to vent the bowls.

Marine and off-road carburetors use those vent tubes

If you’re still having issues you might want to look at the alternator/battery. The coil was already suggested, some of your symptoms seem to be when the car is at low engine RPM or when using power hungry accessories, that’s why I’m thinking possible poor alternator output. Hopefully you already found the issue.
Good luck.
Jay