First, the story of this car:

Hi everyone. My name is Dave and I own a73cat. The story of how we met up started in the summer of 1993 with a relative(lets call him Mike) sending me an issue of the WheelerDealer. Mike knew that I was looking to replace my first 73 XR7. It was white with a blue interior and Half vinyl roof and it was on its last legs. Anyways, Mike had found a lookalike to my first cougar so he figured that I might be interested.

The ad was in black and white so I wasn’t sure of the colour. The body was light coloured with a dark vinyl roof. The car in the ad looked like a purrfect replacement. I decided to call the owner(located in N.W. Iowa) and see if the car was still for sale. It was, so I asked the seller the colour of the car. He said that I should know by the ad. He paid for a colour ad. I was informed the colour was medium bright yellow with a ginger interior and vinyl roof. Not what I expected. I was hoping for the white and blue combo but I figured the price was right. He told me that he had no time to take care off it. He was hoping to find some one that could make it right(restore it). I told him that was my intention. He sent me a picture (full colour) of the Cougar and a short letter with the vin# and other particulars. I decided to send the deposit.

Now I live in S.W. Ontario and the cougar is in Iowa. How is this going to work? My wife was pregnant with our youngest son so there is no way we could drive there and back all that way. My wife, Lori, and I picked Labour day weekend to pick the car up.

We drove down to Windsor,dropped our oldest son off at mom and dads,flew from Detroit to Chicago,picked up a rental and drove to Hampton, Iowa. This was 1993 and that year, there was terrible flooding on the Mississippi. We weren’t sure if we could get to the car, and if we could, would the car be under water. It was an interesting drive that day. We met the owner at the car wash that he managed,and sitting in the front lot was a73cat. It did not look like it does today. There was some minor rust,various dings and dents. The interior was dirty and it had a case of a sagging rear but all in all she was solid enough to drive home. I handed over the money owing and Lori,a73cat, and I were on our way back to Chicago. The rental was dropped off with 15 minutes to spare. This was all on the same day.

The next day was a nervous one.The 8 hour drive back home was full of uncertainty, not knowing if we would make it. And if we did, what was in store for us at Canada customs at the Detroit-Windsor border.Was my paper work correct? Could I drive into Canada with the Iowa plates? Was my car insurance sufficient?

All these questions were answered as I was told to pull in by that huge customs agent with the gun in his holster. .(I bet at this point you are hoping for guns to be drawn). That was not to be, as all my paper work was in order. I was clear to leave after paying taxes (this is Canada). The rest is history.

Nineteen years later and Lori and I are still enjoying Cougar ownership.The first 15 years was driving as an unrestored survivor. I did clean it up and rebuilt the351C 2bbl. but left its original paint and interior alone. A73cat was enjoyed throughout the summers as we participated in many local shows as well as Carlisle in 2002.

And now the rest of the story…

First off, let me say that this one beautiful Cougar that I would love to have. The restoration is fantastic and the engine is a sight to behold. Nothing wrong about a 351C! I don’t know if we have ever had a car that got 50% 0f the votes cast!

But 1973 was also the last of the classic Cougars. And that was not such a good thing…

On the surface, it just seems natural that a beautiful orange car is the perfect choice for the October Ride of the month. Symbolic even.

I had thought, as I was watching the poll returns that I would probably write about the pumpkin that turned into the magic coach or some other Halloween themed thing, and that might have been the safest choice. So much for safest choices.

You will never have trouble identifying a 1973 Cougar; just look at the bumpers. On September 1st 1972 the new Federal Motor Vehicle Safety Standard No. 215 would establish that every new car sold in the US would be able to survive a 5 MPH frontal impact or a 2.5 MPH rear impact with essentially no damage. While it might seem that this was a standard for bumpers, it actually drove design changes in almost every aspect of the vehicle. For example, drive train choices would have to be extremely limited (there were only two in 1973, the 351 Cleveland 2V and, thankfully, the 351 CJ 4v) due to the requirement that each change in vehicle weight would require crash test certification. The additional weight of the new bumper systems, located at the extreme ends of the vehicle would also drive suspension changes and even tire size requirements. Every car in the entire line up would have to have all of these engineering changes just to make it legal to sell. And the bumpers were just the most visible of the new requirements.
1973 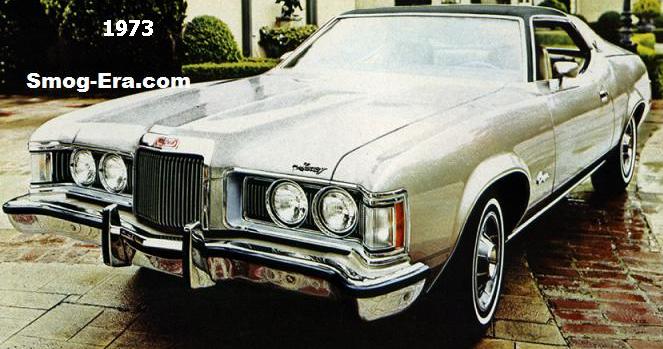 Each of our cars has its own history, but they also serve as time machines to take us back to the way things were. October 1st, 1966 was the first full day of Cougar sales. By October of 1973 the last Cougar to be built in the Dearborn plant was sitting on a dealer lot, the new larger Montego based Cougar was running down the line in Lorain Ohio. Although sales were up slightly for 1973, and the XR-7 was now outselling the standard Cougar, total sales had declined from 150,893 to 60,629. The end of an era had arrived.

How could the market change so much, that in the spread of just six short years, there would not be a single car that really fit in the foot print of the original Mustang and Cougar? What happened? As it turns out it was not the market that changed, but the regulatory environment that was changing the direction of what Mercury, and every other manufacturer could build. As I am writing this the US Government is shut down. The government is split over the implementation of the Affordable Care Act AKA Obamacare. For one side it means providing insurance to people that don’t have it now, and to the other it means a massive increase in government intrusion. There was a very similar situation occurring in the auto industry in the late '60’s and early 70’s. Since regulations that effected the car companies didn’t seem personal, there was much less drama involved, unless you were working in Detroit at the time.

They say that history repeats itself. Maybe we can learn something from the past. In the early 70’s Ford produced films that they used to communicate what was going on inside the company with employees dealers and even suppliers. They were generally not available to the public. Fortunately some one saved a few of these and they can give us a glimpse of what was going on inside the company in a time of great change. The following is one of those films. It takes a while to watch, but I would strongly encourage you to take a look. I think we can learn many lessons about what they feared, (putting explosive devices in cars for air bags) and then to contemplate what we know today. And what happened to those cow-catcher bumpers? You can thank, or curse, Ronald Regan, as that was part of the regulatory roll back following his election.

Congrats on the win Dave!

And thanks for the video Bill. Really great to have an insight into how things happened back then. The part that bummed me out the most was when they mentioned how they would design for the best quality and maximum longevity-- that as such a stark contrast to what a former coworker of mine told me about how things were done then (1999/2000) where his father worked, AC Delco. They specifically designed parts to last only as long as the warranty period, and to fail as soon after that as they could. “Anything for a buck” has really been taken to an extreme. I guess that’s part of why we all like these older cars-- they were built to be as good as possible.

I can’t really think of a much worse thing that could happen to cars (among other things) than the 1970’s.

So it’s great to see a win for the last of the great cats!

Thanks for the great write up Bill,to explain how things in the auto industry changed drastically in the early 70s.It was devastating to design and performance ingenuity! Thanks to everyone that takes the time to vote and add comments about the nominees. Sincerely, Dave Uza.

Congrats Dave. She is a great lookin’ cat.

Bill, as always…great write up. I enjoy reading them.

Great Cougar for ROTM, congrats Dave. Bill thanks for the video link and yes another great write up.
Steven

Dave, I always thought I didn’t like the “Full Size” Cougars of the early 70’s, but oh man does this orange beauty change my mind! What a beautiful car. I think I want one…no…I’m sure I want one!

Congratulations on the ROTM HONOR!

Congrats Dave, well deserved! I remember seeing this car in person and it is quite a fine car indeed. Im still partial the 71 XR7 I had many years ago. I would love to have another.
I still like the cow-catcher bumper I had on mine.
Thanks as well for posting the video. Seeing the side of the designers point of view, when buying a car and not liking it, because he has already seen what is coming in 3 years was interesting.

Congrats Dave! Quite a fine “Great Pumpkin” she is!