Replaced plugs on 390 today...what a pain

I went ahead and replaced my plugs today with Autolite 45’s, cap, rotor, and wires. I was originally going with the Platinum version for longevity, but some feel they are better suited for the high energy ignition systems…which I don’t have.

One difficult thing was installing the plug into 6…spent half hour until I figured it out…7 and 8 weren’t too bad, but was a contortionist getting a hand under the master cylinder.

Ironically, the hardest part was removing and installing new plug wires…difficult getting hands on the boot to remove, and leverage trying to put boots on to feel that click. I had a spark plug wire tool, but didn’t have a correct angle to be of any help.

I went with the black MSD wires only because they were supposed to fit well…they were too long. I’ll probably shorten them sometime after grabbing new terminals. I was going with the Marti wires originally, but some seemed to have problems with them. I’m open to changing these out sometime.

After starting it up and getting warm, engine seems to still have a very slight miss although better than it was. Will have to dig into that later.

It’s bad enough on my 351c - can’t imagine on a big block. I used silicone boot grease on my Marti wires, but after 5 years the boots were one with the plugs. Destroyed the boots getting them pulled off. I bought another set of Marti wires though because they look and fit so nice. Interested to hear more about platinum plugs being better suited for high energy ignitions. I am running Motorcraft SP459 platinums with ordinary stock ignition system, but have wondered if the original AF-32 plugs might be better in the long run.

Here’s my favorite tools for this job plus some dielectric grease. I have changed my 390 plugs a handful of times. So have developed some technique. I’ve tried to use a torque wrench but it just isn’t feasible for all but the most open cylinders.

I changed from MSD universal boots/8.5mm wires to Ford Racing 9mm 45 degree boot type. These wires seem to have a better ‘click’ when installed. Better confidence. Never confident that the MSD wired that came with the car were fully seated. You don’t need thick wires but my engine already has an MSD distributor & box. 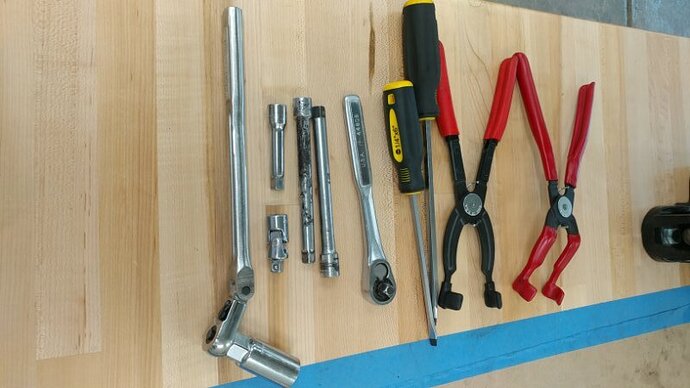 I changed from MSD universal boots/8.5mm wires to Ford Racing 9mm 45 degree boot type. These wires seem to have a better ‘click’ when installed. Better confidence. Never confident that the MSD wired that came with the car were fully seated. You don’t need thick wires but my engine already has an MSD distributor & box.

The 2nd time will be quicker.

I purchased the MSD wires based more on fit vs wire size…I assumed the silicone material would allow a longer life. One thing I like about the MSD wires was that “ridge/knob” a few inches from end…easier to remove wires in future. I was concerned about feeling/hearing that “click” when installing…it’s difficult in getting decent leverage to push them on, unlike working on a small block or Galaxie engine bay.

Looks like I have similar boot removal tools as you…couldn’t seem to make them work based on the angle at the end. I just purchased a Gearwrench version off Amazon…has a bit more of a straight down look and a 90 degree end…will see.

The 3/8” magnetic spark plug socket worked well for me, in addition to a flex head similar to yours.