So a while back, some of you might remember that I was trying to find a good set of '68 Standard door panels that I could freshen up and use in my car. Mine didn’t look that bad at first, but the vinyl was very brittle at the top and actually cracked and separated when I started to mess with them. Also the plastic chrome trim was completely gone, leaving bare grey plastic. I had been hoping that it would be possible to repaint the panels with SEM paint, and somehow redo the chrome. But those plastic items are fused to the panels and there’s no way to separate them from the vinyl without destroying everything. Then I couldn’t find any used ones that were in good enough shape to look how I wanted. So I decided to take the plunge and turn to the only place I’m aware of that can reproduce door panels from scratch: SMS Auto Fabrics.

Here’s what happened to the original panels when I was endeavoring to remove the beltline strips and just replace the backer boards. 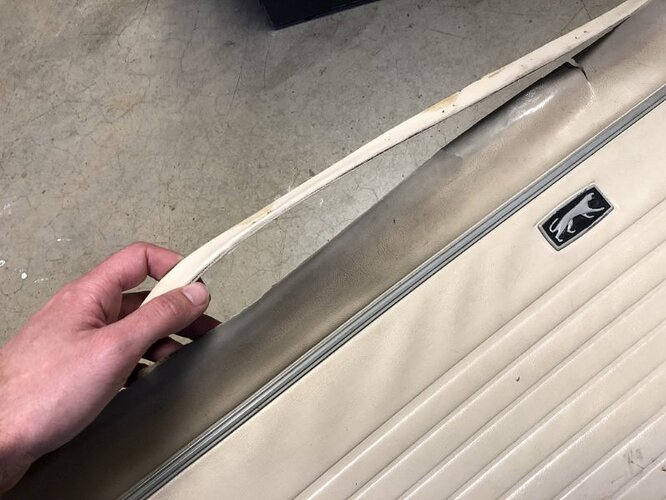 andrew project (1198)-2048.jpg800×600 75.7 KB
There were a couple enticing benefits for me to get new panels made. Firstly, I could get them made with the same vinyl that my new upholstery and rear side panels were done in, so everything would match perfectly without the need to paint or dye anything (the new upholstery is a bit whiter than the original Parchment). Also the chrome trim would be fresh and new, unlike any 50 year old panels. Lastly, SMS happens to be just a 30 minute drive from me, so that made it a bit easier too.

There are some caveats though. Some of you may have heard of SMS and their questionable reputation for lackluster customer service and long delays. I knew I was potentially getting into something with that potential, but I also had seen other things they’d done and been impressed with the quality of their work.

So I took the plunge and took my old panels up there, along with new backer boards from WCCC. They would need the metal top rails from my old panels, and obviously they’d want them as a reference for the pressed-in patterns, trim and emblems. When I got there the staff was reasonably friendly and helpful, and we talked about what I wanted them to do. They took note of the vinyl code I wanted them made in (L-3718). I asked about the plastic trim that borders the panel and whether they had the exact same profile. They brought out some samples of the different trim they had and found one that was closest, but not exact. At this point I met the owner, and he said they could make tooling to produce the exact same trim profile as on the original panels, but they’d have to charge me a couple hundred extra to help cover the tooling cost. Given the cost of the panels already, I wasn’t really wanting to spend more, and the trim they had on hand was close enough for me. We also talked about the twin black pinstripes in the original trim, and they assured me they could recreate this.

So, this was in about April of 2018. At that point I was still under the illusion that maybe I could get the car finished in time for the WCCC Open House in July. I asked if they could complete the panels by July. They said normally it takes longer, but if I paid in full up front, they could get them done. So I went ahead and forked over $595.

Needless to say, they weren’t done in July. Or August. Or September. Etc. It actually took until mid January 2019. There was no communication initiated from their end during this time, I had to bug them periodically to see what the status was. They kept saying that the issue was the emblems, they needed to make molds (this was the same for months). So this was getting pretty frustrating. But finally this month, I got word from them that the panels were almost done. They asked if I wanted the “whiskers” (beltline felt strips) installed, and with some hesitation I said yes, hoping they had the correct stuff. When they told me the panels were done, I drove up there to pick them up. When I got there and saw the panels, I immediately saw that they had forgotten to paint the emblem backgrounds black, or apply the pinstripes to the border trim. I said this, and the response was something like “oops, you’re right! Sorry about that, we’ll get that done asap.” To their credit, I got a call the next day saying they were finished. So I finally picked them up for real.

All that being said, while the process and delay was frustrating, I am very impressed and happy with the end results. They look awesome and the workmanship seems very good. How many people can say they have brand new factory(esque) door panels? I’ll shut up and post some pics now. 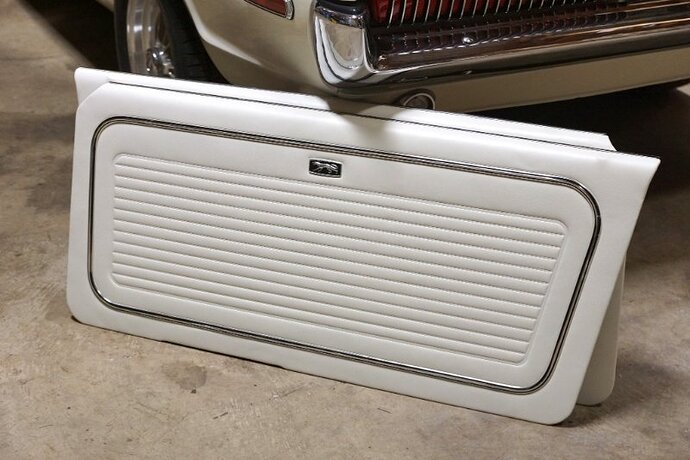 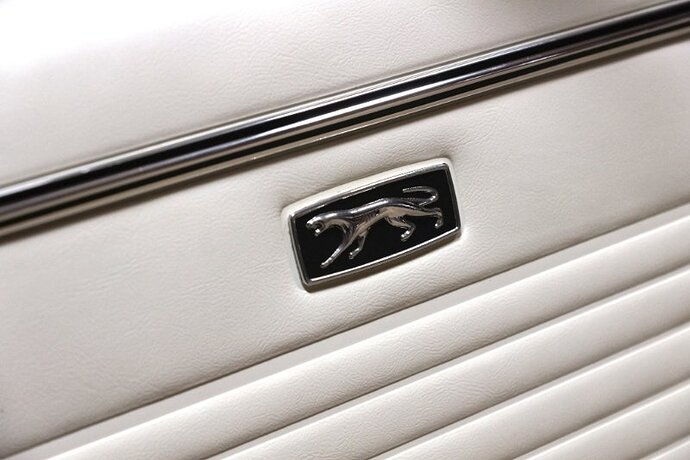 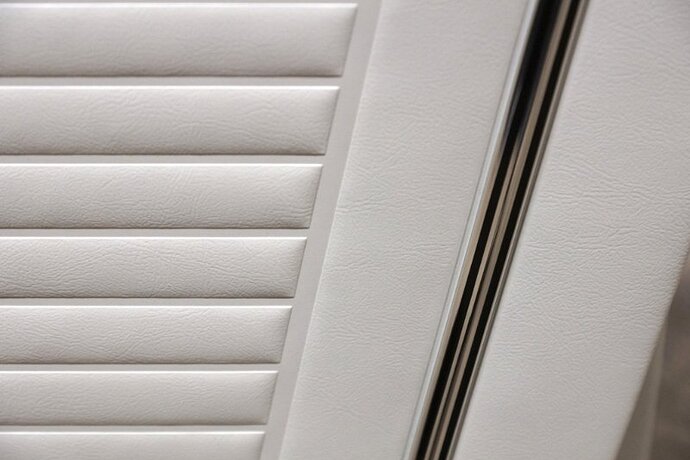 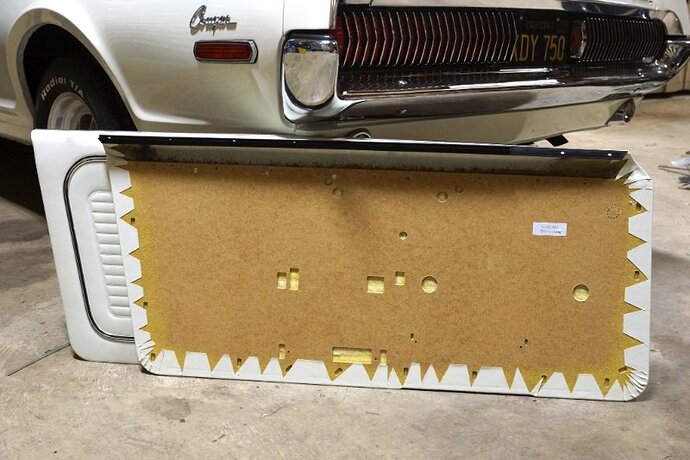 SMS door panels (6)-2048.jpg800×534 85.8 KB
Below: they added some extra rivets of some sort to help hold the metal rails to the backer boards. Nice touch and they feel very sturdy. Beltilne strips were riveted on and look good. 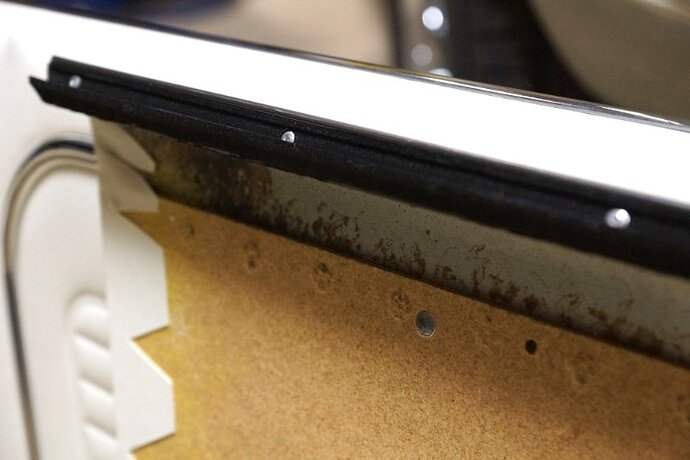 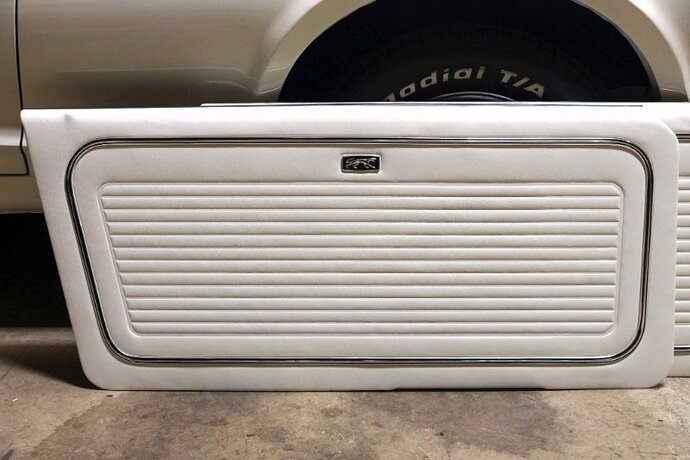 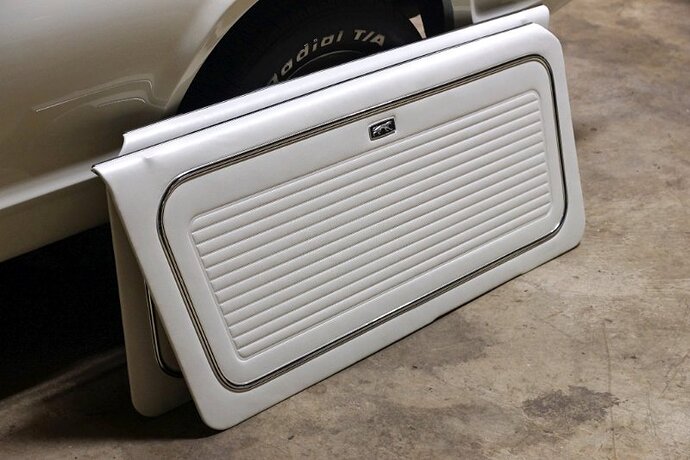 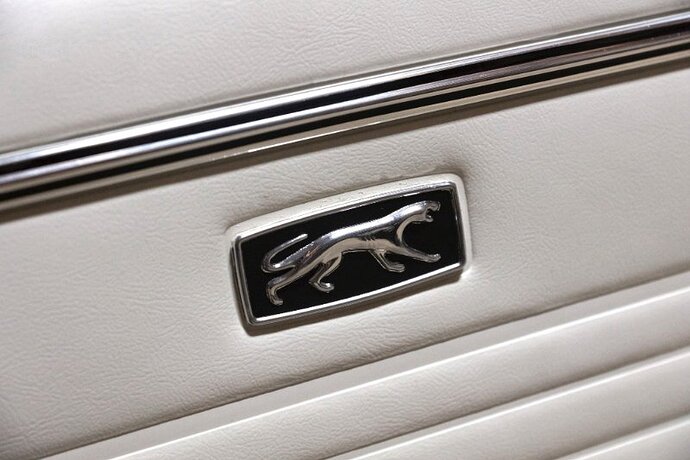 SMS door panels (11)-2048.jpg800×534 70.8 KB
Below: looking really closely, I realized that they used vinyl for the black pinstripes on the trim. The only way to tell is by finding the edge. It works, looks good, and should hold up well. Probably much cleaner lines this way as opposed to hand painting. 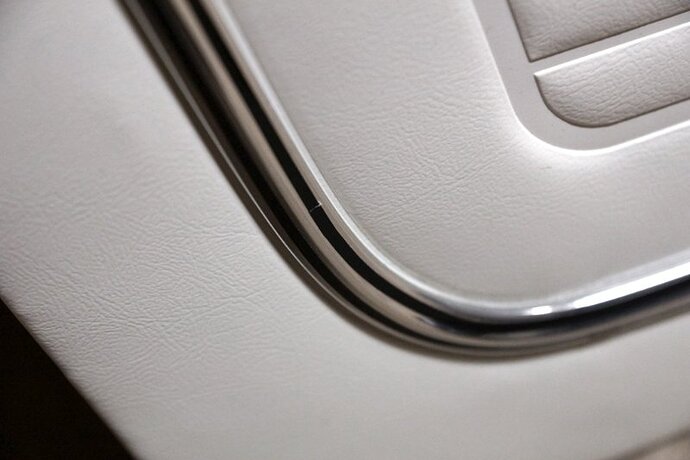 SMS door panels (12)-2048.jpg800×534 50.6 KB
You might have noticed that there are no holes yet in the panels. I’ll have to cut those myself, for the armrests, handles, lock knobs, and mirror knob. Luckily those holes are all built in to the backer boards, so it should be a no brainer.

So after all of this - would I recommend SMS for new door panels? Actually… yes. After I saw the quality of the results, I was so impressed, I kinda forgot about the hassle and the long wait. Not everyone has the same priorities, or patience, but for me what matters most is the end result. You just have to be clear and detailed about what you want, and then be ready for a long wait and not much communication. I don’t know of any other company that can make one-off, accurate reproduction door panels like this (but chime in if you know of any). That’s all, just wanted to share my experience and pictures!

They look awesome! But it would be hard for me to deal with that kind of customer service. But that’s me.

You should have got your boss to chip in and got the molds made for the correct trim. New panels would be a great item for WCCC to offer. They look really nice.

Wow those came out great, would be interesting to see what other factory interior panels they could reproduce such as those pesky missing 67 & 68 XR7 map pockets.

You should have got your boss to chip in and got the molds made for the correct trim. New panels would be a great item for WCCC to offer. They look really nice.

It would be great if we could offer them, but it probably wouldn’t make much sense for WCCC to get in the middle. For one thing, we probably wouldn’t get a break on the cost, so we’d have to add our margin and retail them at a significantly higher price. Then there’s the question of what colors to stock, and how many, not knowing if or when they will sell. It’s probably for the best to let SMS make them one at a time however a given customer wants them. But I agree it would be great if there was a way to make them readily available at a fair price.

Wow those came out great, would be interesting to see what other factory interior panels they could reproduce such as those pesky missing 67 & 68 XR7 map pockets.

Actually, I think I’ve seen them do those map pockets before, or at least new vinyl covers for them. They have the tooling for the embossed walking cat for the 68 map pockets, if I’m remembering right. Somebody had a set of XR-7 panels made a while ago, including the rear panels (just the vinyl skins I think), and they looked great. I’ll see if I saved those pics anywhere.

Found the old XR-7 panel pics, I knew I saved 'em. I don’t remember the story behind these, or who’s they are, but they are just the skins. Pretty cool. However, the walking cat on the map pocket skin isn’t correct, it looks more like a steering wheel emblem, or like the 68 std door panel emblem. But they could probably do the correct version if you provided them with originals to go from. 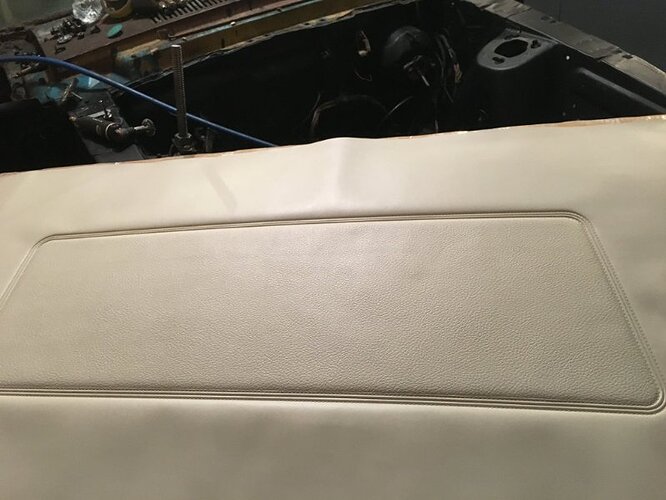 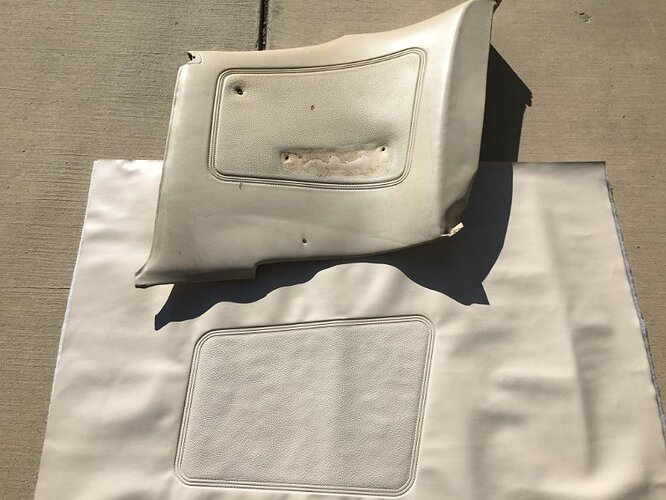 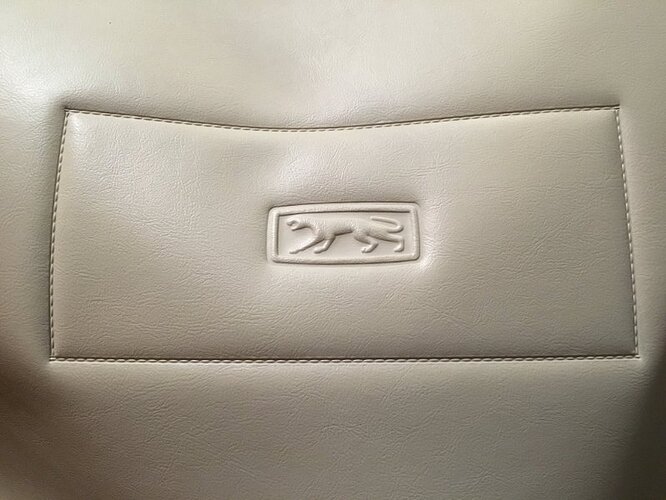 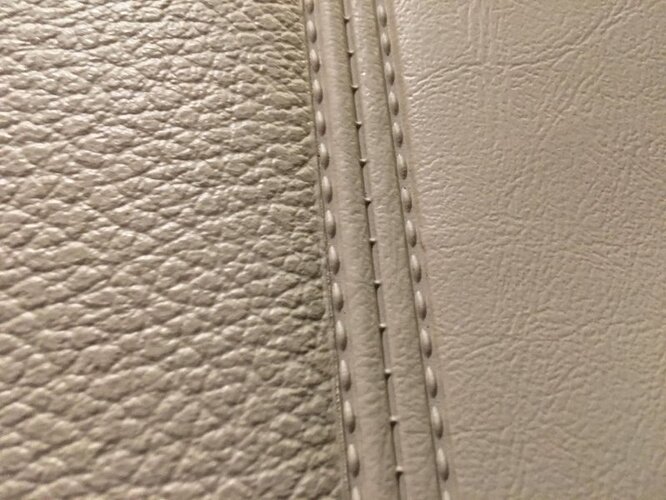 Those panels look really nice considering we don’t have any other options. I wish you could pick up the phone and buy interior panels like the mustang guys do.

They look great to me!
Poor customer service (missed promised delivery date and lack of communication) seems to be the norm for most of these specialty places.
I’m not talking WCCC, but the specialty places that I’ve dealt with (seat belts, steering box rebuild, and others). Although your 6 month delay makes what I’ve endured over the years seem like nothing! I guess I’m a little more tightly wound!

As the saying goes… All’s well that ends well!

Those look great! And 600 bucks isn’t the end of the world for something made one off. I really wish door panels where reproduced somewhere, not too jealous of mustangs but definitely jealous of the selection of parts they have available.

I need door panels too but I don’t know what I am going to do to get them. I don’t mind waiting for quality work but almost a year for door panels?! That’s a bit excessive and they still made a mistake. No big deal if your local but if you had those shipped after waiting all that time I wouldn’t be too happy. I think their quality of work does save them for their weak customer service but not sure I can put my faith in them to get door panels.

I think I will probably end up getting backer boards and having an upholstery shop wrap them in vinyl until I can find some good take offs or something else becomes available. At least I’ll have something on the doors.

I have SMS door panels. They are good driver door panels, but they are not exact. The texture is over emphasized, the emblem is weird looking and it should say “COUGAR” on the 69 standard door panel which it did not and when I said it should, they argued with me. Since it was about a year+, I pretty much gave up and just used them. They are nice, but not exact. Same with door panels for my 68 Monterey which is how I learned of SMS. The Monterey was used in a movie and some dummy tore the top of the door panel. The guys in charge of handling cars sent my door panel to SMS and it came back looking great except the trim was inverted. Instead of the trim having a convex design, it was now concave. It was o-k as this car is never going to be a concourse vehicle. A little annoying, but the panels were nice and not aged fragile. They were new with a renewed life expectancy. SMS does good work. Not very fast and certain details might be different. Not bad, just different. For my Eliminator I wanted exact, so my only option was to find original door panels.