Hi all,
I recently purchased my dream car, a '67 Cougar XR7. The car has a '73 302 in it and a 4-speed. Needs a ton of work starting with the fact that it runs but doesn’t start from the key. Previous owner I think was rewiring the dash. Anyway, when I purchased the car, he hooked up a couple wires from the battery to the starter motor relay and showed me that the engine is operable. I’m trying to get it to start from the key. I replaced the starter motor relay just about an hour ago and now when I try to attach the battery the car lurches forward (parking brake doesn’t work) without the keys even being in the ignition. I’m thinking that he (the previous owner) screwed something up around the ignition switch. Maybe it’s like permanently hot wired? Should I replace the ignition switch or look through the wiring of the dash first? Any suggestion where the fault might be?

Get a service manual. You can buy the reproduction manual pretty cheap from most vendors. It will have the wiring diagram for the ignition switch in the manual. Then start tracing wires and see if everything is wired correctly first. The manual will also help you out with the rest of the Cougar as you move foward with getting it road worthy. Congrats on your new Cougar purchase.

Cars equipped with tilt away steering then route through to a starter safety switch located on the steering column near the vacuum motor so the car cannot be started in the tilt away position. See http://www.concoursmustang.com/speegle/67%20Mustang/Article-67Tilt.pdf

However for the engine to fire, the i wire Circuit 262 then goes back to the firewall where it connects to the ignition circuit’s #16 (red-green) which goes to the coil, providing power when starting. (Note: the power draw by the starter motor consumes 100+ amps and thus power provided to the I circuit will measure roughly 9 volts, not 12 volts. This is why the resistance wire is bypassed during starting and not to give a brief 12 volt jolt to the ignition systems when starting!!!)

Note the connector at the firewall also connects circuit #16 (to the coil) and the ignition switch on circuit #16A (the pink resistance wire). When the car starts and you return the ignition switch to the “Run” position, power to the coil is now provided via the ignition switch on circuit #16A at a reduced voltage of 8 to 9 volts. If you have an XR7, the power from the resistance wire goes to the Tachometer then to the firewall. If you do not have power at the coil in run position with an XR7, place a bypass wire across the tachometer and retest for power at the coil. Note if the car is running, and you put a Voltmeter on the Starter solenoids I post, you will also read 8 to 9 volts because the wires are all connected at the firewall thus backfeeding power from the resistance wire.

I hope this clears things up.

Usual suspect is the starter solenoid. New ones can be junk.

Yes, unfortunately the “concours correct” starter solenoids look wonderful but often stick giving the exact symptoms that you describe. Attached is the wiring diagram showing the colors of the wires and where they hook up to the starter relay (solenoid). Usual suspect is the started solenoid. New ones can be junk.

Uploaded to site just in case… 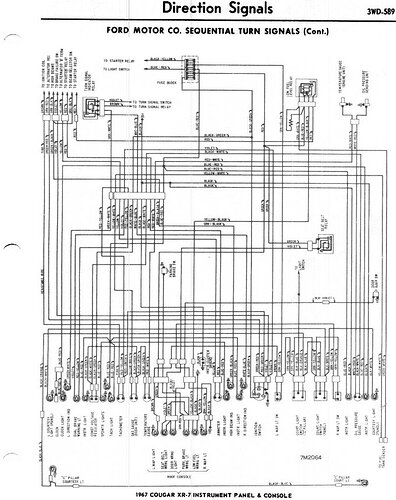