Hello again - As I am deciding on whether and where to invest in my car, I am unsure of the condition mine are in as compared to others. Since I do know that the 1967 cougar didn’t even have a right side box, should I be concerned about mine or not? I have attached a picture and welcome any thoughts on the subject. Thanks. (Also, I included a ruler in the picture to give some context to the size of the hole) 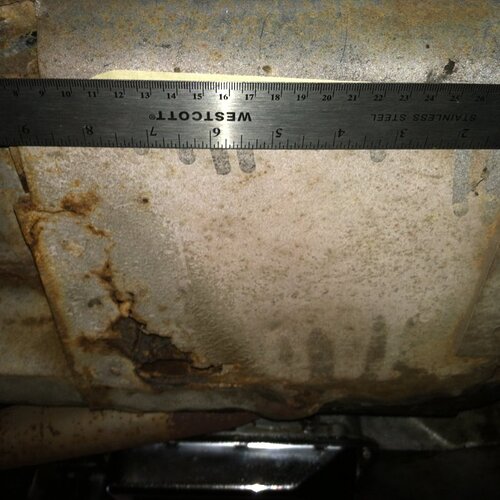 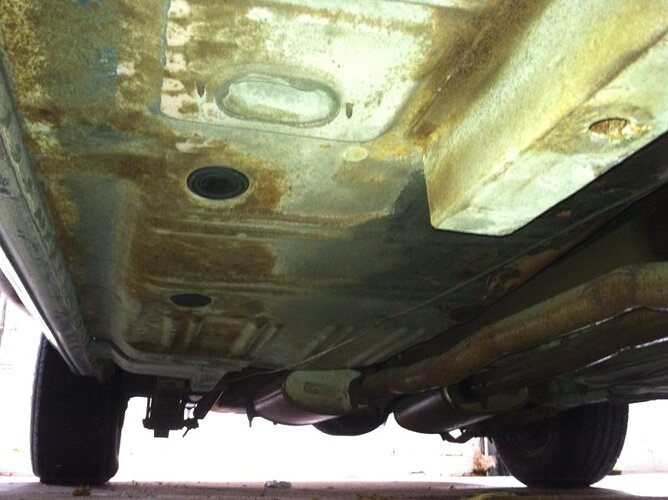 I can tell by the rust in the bottom of picture that it does need replaced, also I would add the other torque box for stability.

Replacement sounds like the most expensive option. Couldn’t a plate be welded to the underside to give enough stability for a daily driver? Does anyone have an idea of the cost for full replacement vs. a patch? Thanks.

About $60 for a torque box and figure about two hours of labor to replace one if your not doing the work yourself. Not to difficult of a job if you’re well verse in cutting, grinding and welding. You have a gas line to remove on the driver side, and take up the carpet in the front foot well area so nothing catches on fire.

Brian, you are making this sound way too easy, it would take me two hours just to get all my tools together LOL

I have to agree with catlover, it took me almost two hours to get a decent picture that included the ruler and none of my fingers! Seriously though, to move the carpet out of the way means moving the console and seats and various interior pieces and then the time to do the actual repair. As to my original question, is this 2 inch or so area of rust really worth that much effort?

Seriously thou if you haven’t done one before you would want to double it to four hours. A restoration shop that’s done one before can do it in two hours. You don’t have to remove the console or seat. Just the sill plate and kick panel and pull that corner of the carpet up and put a block under it to hold the carpet off the floor while you’re welding. Short term driving the Cougar with that rust spot isn’t going to hurt anything. Long term rust creates more rust and you’ll end up with a bigger problem to repair. Could cause some body flex and cracks in other areas long term. Saving it for a winter project would be fine. The rest of you floor pan looks nice and solid so I wouldn’t let it go to long before repairing it.

Definitely don’t weld a plate over it. Just going to trap more moisture and create more rust on the inside.

Brian has nailed every aspect of this repair. It’s not a big deal.

Ah Michigan… They teach rust repair in the schools there. A shop in Arizona would call in FEMA if faced with that.

You might take a boroscope and look up into the torque box a little better to see if it’s gone beyond the bottom surface. Mine didn’t look too bad initially, but it ended up taking a replacement torque box plus patching the firewall and frame rails. If you haven’t pulled the carpet back yet, you might do that. If it got into the firewall or floorpan then you will definitely want to get more in depth with the sheetmetal replacement. These guys that can do it in 2 hours are pretty impressive. It took me significantly more time than that, but I had quite a bit of other work I had to do at the same time. As far as driving the car like it is, you should be alright unless you’re trying to race it then you’re taking your chances on twisting things. As someone else mentioned, if you don’t have a passenger side torque box it would be a good idea to put one on that side while you’re doing the other (assuming you’re not concerned about originality).

Ah Michigan… They teach rust repair in the schools there. A shop in Arizona would call in FEMA if faced with that.

Yeah… but we have a great selection of driveline & interior parts

In situation like yours with my rear torque boxes, I opened them from the bottom to find out that it was the only portion (bottom) that was rusted, so I cut the rust out and welded patches. That was just fine for a street driver.

Thanks for all of the good input. When I replaced the carpet a couple of years ago, the floor and firewall had not been affected by this, showing only what seemed like normal deterioration considering the age of the car. Rear torque boxes? I can’t believe I have not heard of these before, but I’ll look for them and see what shape they are in!