went to the track

So went down to the track last Friday night. First off, used the scale there and weighed in at 3525 with me in the car and 5/8 tank of gas. The racing itself wasn’t great. best time was a 15.2 at 87 mph. For a recap I have a 69 standard coupe. originally 351w 2v, fmx tranny, and 2.75 gears. now it has 3.90 gears and posi, performer intake, and 600cfm carb, and long tube hookers with 2.5" exhaust. the car goes ok off the line but could use more traction. Once I get to 4500 rpm the car just plaques and doesn’t make any more power. I think the 2v cam just isn’t making any top end power. I think if I played with the timing and had a perfect tune and ran different tires I’d be able to break into the 14’s. ultimately I think I’ll be investing in a cam and heads

Fabulous! The 351W was an underexploited engine in its day. I know Cleveland 2V vs 4V cam specs from a year and two later, but not whether the 2V cam was actually different from the 4V for the '69 351W - it may not have been.

HOW-ever, a low 15 from that is, after all, equivalent to what mostly stock Fox Mustangs from the “5.0” era did, and, dang, should be considered a tour de force! Nice work. Clearly it’s got a smart owner who has it running near optimum with respect to things like the timing you worry about.

If you haven’t, go get a pair of the famous 925D Mr.Gasket springs, now back in production, and have a lot more enjoyable response (and some power, too!) below 3000! https://www.summitracing.com/parts/mrg-925d/overview/make/ford

In lieu of traction, when you get frustratingly close to 14.99, try tossing some furniture out (the passenger bucket). Usually will turns a 15.08 into a 14.9x.

I’m glad you had some fun at the track. I hope your brothers and their GMs are getting nervous about what your Merc can do.

x2 glad you enjoyed the track time, get anyone to get shots of your cat off the line? Be care full of getting the race bug, those little speed upgrades can add up real quick $ trying for better speed and times. I’m always jazzed to see a cat at the track

This is from a long time ago with my old 70 XR-7. It had a 351W Comp cams if I recall 268H Hollie 600 and Edelbroc 352W performer. Heads were reworked for screw in stude and guide plates. But with a open rear it had a hard time getting off the line.
Edit; it had 3.00 gears

Ran at the test and tune last night at Pacific raceways. Ran a 15.59 at 88.48 this run. Had a faster MPH later but still having trouble roasting the tires of the line keeping my 60" times down. 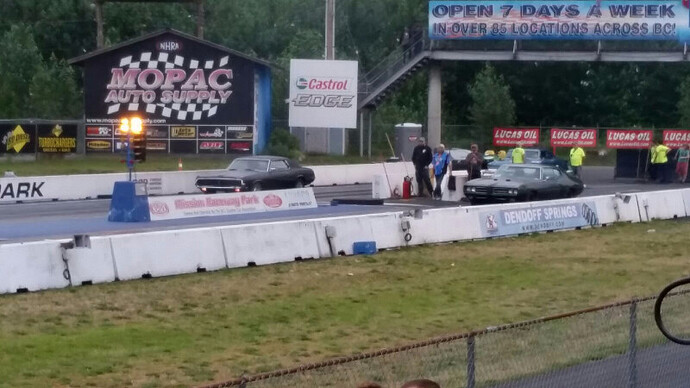 Caleb, this would make for a interesting bit for the newsletter. Maybe e-mail some more pics and info to Heather.

R.B Phillips, I’m running an msd distributor and box and already have the timing set up to come in pretty fast, but I appreciate any suggestions to get quicker. Badcatt that’s an awesome picture. it made a huge difference switching to the 3.90 gears and posi. I have traction trouble now but I couldn’t imagine having an open rear. Scott I’ll try to write something up soon.

Gosh, I hate to be the naysayer, but LOW 14’s with your setup should be easy-peasy! My '94 5.0 'stang 'vert runs low 14’s all day long and it is bone stock. I won’t mention what Isabel is running, it just would not be right.

Ease up on Caleb. The rest of his family are all bow tie fans, so he is probably not getting the best advice from them. They are afraid of what his cat can do when properly set up. Caleb, maybe you should bring your sister over to the Blue Oval side.

Scott I think you’ll have a hard time convincing most people that she needs a different car, 69 gto isn’t exactly an undesirable car. Besides even the most die hard ford fan has to agree that it’s better to be driving a poncho than a civic. I think there might be more in the car. I’m wondering if there’s a chance the fuel pump can’t keep up after the fuel bowls empty at the end of the track

Well there are definitely a few Fordnutz members that are seasoned racers, so maybe we should put something together to get the club racers talking.

Well there are definitely a few Fordnutz members that are seasoned racers, so maybe we should put something together to get the club racers talking.

Gosh, I hate to be the naysayer, but LOW 14’s with your setup should be easy-peasy! My '94 5.0 'stang 'vert runs low 14’s all day long and it is bone stock. I won’t mention what Isabel is running, it just would not be right.

I agree. Not dissing you or your cat, but it sounds like some advance curve tuning is in order. You can find up to 30 horse in the tune, which it sounds like you need. You should be capable of mid 14’s, stock fox body stangs ran in that area pretty consistently. Like I said, look at your advance, jetting, etc. Still great car, and glad to hear you’re having fun. The stangs only slowed down when they went to the sohc 4.6.

Thanks Chuck. It’s nice having a good comparison. I can’t believe how light those first mustangs were. I think a cam swap will do wonders for me.

I think the cam swap would be a good choice. Just be sure to stay in the range of that intake. Overcamming can hurt a lot, and can acutally slow you. I noticed that you said the timing was coming in pretty quick. How quick, and what is your total advance (base plus mechanical)? The 268H is a good match with a performer intake. Getting some hook at the line will help with those ets too.

I hope to hear you’ve gone back and got her into the 14s or lower.

I did make it back but the times didn’t improve. My tranny doesnt seem happy with the 2-3 shift. Works been crazy so haven’t had time ro really test and tune it. It’s running really smooth just cruising around so I don’t want to start messing with stuff unless I have enough time to do it properly. I had a few other things to sort out in the meantime too.

I hear you on the work thing. You’ll get it sorted out. It took a lot of messing with springs, rejetting, driving, pulling plugs and inspecting color, to get my car where I was happy. I will be installing a smaller cam over the winter. Not really smaller, just better suited to my factory 289 heads with a wider lobe separation. I think I will actually be happier with it.