Here you go. Anyone here know more of this car? Or has seen it in person? Would like to know the “secret” story on the car. Maybe it has something to do with why the center grille is upside down! LOL!

I am surprised the car is not folding in half. I wonder if any convertible re-inforcements were down on the underside of the car. It looked like the rocker panels were the stock thickness from the door sill photos. Enjoy. Scott DSI Auto Sales, LLC is pleased to present this extremely rare 1968 Cougar Convertible. This is not a misprint! This is a real 1968 Cougar Convertible. The Mercury dealers in 1968 were trying to keep up with the Mustangs so they began to do dealer conversions on the Cougars to try to keep up with the Mustangs. Some people started calling these “CATVERTS”. I am not sure when this name got started. This is your opportunity to own a true classic. You will not find another one like this in the world! This car will get you into all kinds of fun conversations. My advice would be do not drive this car anywhere if you are in a hurry because it always generates a lot of conversation.

I purchased this Cougar from the second owner in 2011. He had owned it since the mid 80’s. He told me he purchased it from the original owner who purchased it with about 6,000 miles as a demo. I have no paperwork to verify this but that is the story he told me. As a matter of fact, there is a much more interesting story to go with this car that I promised that I would only share with the buyer after I sold it(if I ever decided to sell it). That is what he did when he sold it to me and I will do the same. It is a good story to go with the car but unverifiable and could potentially over value the car if disclosed prior to the sale. The gentleman I purchased the car from had no idea when the convertible conversion had been done but it was prior to his ownership. He did have it redone after he got it.

I had it repainted to a pearl white color inside and out. I would describe the car as a driver quality car. It would be great for weekend car shows, flea markets, etc. It is not a perfect car. The seats need to be recovered again it has a few minor blemishes that you would expect for a car that is actually driven some. The chrome is ok for a driver but would need to be redone if made a show car. It does have the Dan Gurney interior which is a nice plus. The engine has been completely gone through as well. It has been completely sealed and there are no known leaks anywhere! It is believed to be an original 59,000 miles on the vehicle as well. The title(yes it has a title!) will reflect that as well. The car will be sold exempt because of the age. This car has a 302 2 barrel v8 engine and the automatic transmission. It has an aftermarket exhaust with a very minor rumble to it. It has plenty of pickup but is by no means fast! All of the electrical has been inspected and replaced as needed in the last year as well. The sequential rear lights work as they should and so do the headlight covers(the drivers side is sometims a little slow to come down).

Please feel free to call me at 404 403 2974 with any and all questions. I am a used car dealer but this is my personal car so I can sell it either through the dealership or by owner. It will be up to the buyer.

The seller is either being deceptive or he has no idea what he is talking about.

Show me a Marti and dealer documentation showing they executed the conversion.

I think we all know where the term “Catvert” originated.

I think that is the Keith Meredith car. It was up for sale for quite a while so it makes sense to see it in new hands. It was not done in a factory convertible style, as I recall, but there was some reinforcement done. I just don’t remember the specifics.

Early on in researching the conversion process, I did hear a story about a company in Georgia that used BMW parts to do aftermarket conversions but I was never able to find any specifics or proof of those conversions. So that’s another possible story that could be (erroneously) attached to this car.

Here’s a larger version of one of the pictures on my website. Notice also that the tail lights are blacked out on both cars.

[edit] - This is definitely Keith’s car. The VIN I have from Phil matches the VIN in the auction.

It looks like stock Cougar quarter and side glass were retained. I wonder what top frame was used? I’d love to be able to do that with mine.

It looks like stock Cougar quarter and side glass were retained. I wonder what top frame was used? I’d love to be able to do that with mine.

It looks like a custom top on the Mustang frame but notice the gap between the soft top edge and the window frame. It looks like they used weather stripping to fill it but the shadows make it hard to be sure.

It seems to happen pretty often - someone honest builds a clone, or tribute or phantom car, and within a few subsequent owners it magically becomes original or factory.

How much was the “Dan Gurney Interior” option?

Well, as it turned out I have a stored copy of that issue. Here’s an excerpt dealing with the conversion:

He disassembled his 68 standard Cougar and took
the body to Sherwood Automotive Restoration in
Windsor Ontario for the bodywork. They performed
the conversion, installing the 69-style inner rockers
in the undercarriage and the 2 thick plates like a
mustang bolted to a center plate to allow drive
shaft removal. They removed the roof, and dressed
the edges following the fender “peaks” to create an
original look.

The top was done by Lucky Auto & Boat Works in
Muskegon MI. The top frame is from a 1971
Mustang “married” approx 10 inches from the
windshield to the frame from a 1967 Mustang. This
created a “raked” or slanted rear window very
similar to the original hardtop rear window angle.
The windshield moldings, top latch-down and
moldings at rear window area also came from the
same 1967 Mustang.

Overall it looks like a decent car. It will be well bought if it stays near its starting bid. There are a few items that I would fix right away the first would be the grille center. So what do you guys think the bid will close at? I say $10,270.00
Steven

The seller ended the auction early. I wonder why? Maybe he sold it off his used car lot. It didn’t get one bid on eBay. I really figured with the starting bid at $7k and no reserve it would have sold.
Steven

Don Rush pointed me to this website and forum… I did pick up this car. She is nice, but not perfect. I made an offer outside of ebay and the seller agreed. So now you know that story. Yes, the grill center piece was upside down. Not any more. I am making corrections and any questions about the car, just ask. The interior is partially 67. I will say this though, the car was a wedding gift from my fiance. I have an awesome dream woman and now a dream car! 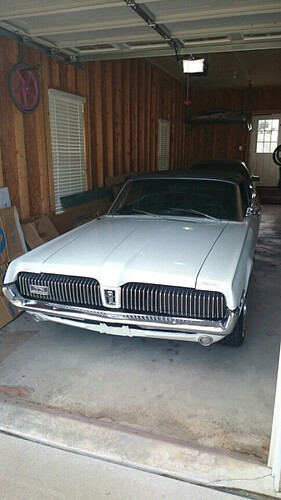 Nice catch … and the fiance doesn’t sound too bad either

Congratulations on your purchase. Enjoy your Cougar and welcome to the Classic Cougar Community.
Steven

Nice catch … and the fiance doesn’t sound too bad either

Thanks! Yes, she is a hot one too. 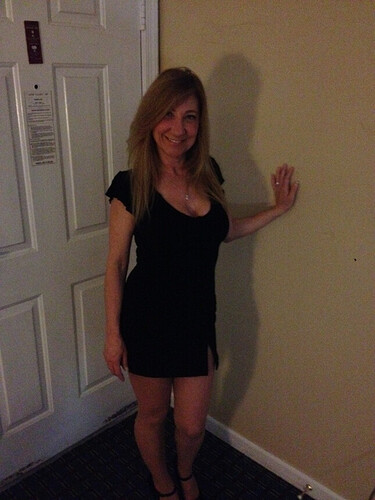 Congratulations on your purchase. Enjoy your Cougar and welcome to the Classic Cougar Community.
Steven

Congrats on the purchase, the fiance, and joining a still relatively exclusive club. Take a look at my website page for 67-68 convertibles and let me know what you’d like people to know about your car and I’ll update the information that’s already there.

Welcome to the club. I’d love to see some close shots of the quarter panel area. I also kept the original roofline on my conversion but would love to see how it was done on yours.