I have just finished having my 1969 XR-7 Professionally painted in correct A-code Black and need to know what are the pin stripe specs width, spacing, and jams coverage.
Bassetts Classics

Here are some resources on that subject, though most of the research has been on 67-68’s. Should be similar, if not the same on 69.

I think the general consensus is that the stripes are 3/32", with a 3/16" gap in between (not center-to center, but the gap space) and the top stripe is about 1/2" from the body line.

West Coast Classic Cougar is looking to offer a pinstripe kit, but it needs to be correct, not close. Can I get a consensus on some original paint cars out there? Since we have a plethora of original paint body panels, car hulks, and fender/quarter...

As for the red paint code, without knowing for sure, I would guess it’s probably the factory code T (PPG # 71528).

Not sure whether 69’s had gaps between the panels like 68s’ (1/2" masking tape gap), or if they were continuous. Maybe someone will chime in on that, otherwise it’s up to you! (EDIT: I just looked at some original marketing photos of 69’s and they do not have gaps between the panels) Hope that helps.
1967_68 Pinstripe specs.pdf (207 KB)

'69’s do have gaps in the stripe between the panels. I thought I had the judging guidelines here but I don’t.

'69’s do have gaps in the stripe between the panels. I thought I had the judging guidelines here but I don’t.

Ok, could very well be that the “show cars” used for photo shoots were done differently.

Thanks for all the help on pin stripe subject.
Bassetts Classics

I’m diggin my new red pinstripes on the black cat… 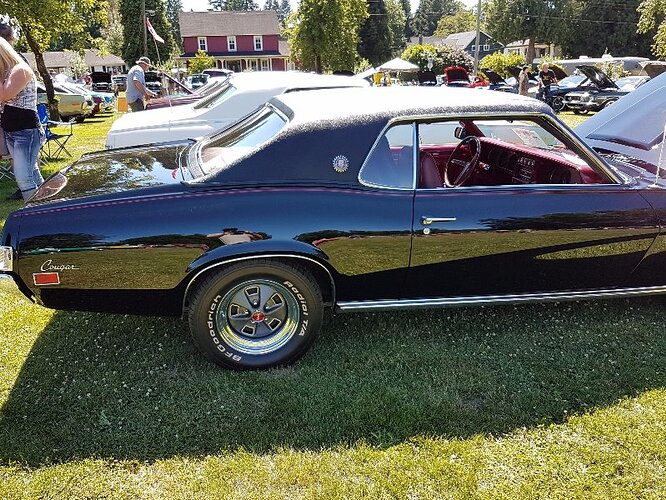