I am selling a Boss with a 302 engine that was replaced by the factory almost immediately after the owner purchased it. Can someone tell me where to find the engine number of the replaced engine on the block?

Casting number and date code are on the passenger side, toward the rear of the block. They’re generally difficult to read with the starter installed.
Blocks used in 1970 are marked D0ZE-6015 with a -A, -B or -C suffix. From 1971 and thereafter, replacement blocks were marked D1ZE-6015-B.

It is on a pad at the rear of the block behind the intake manifold. If the vin is there a digital camera between the hood and cowl can ususally obtain a photo.

What is more important on a BOSS 302 is the block casting found above the starter.

Are you aware of instances of a service replacement block being stamped with a VIN? I’ve never seen one.

I have not either, but it could be that a rebuilt block was used as opposed to a “new” block.

Gotcha. I wouldn’t particularly expect that if it was a warranty repair, but you never know. Certainly no harm in checking.

Thanks. This is what we found. The engine was replaced almost immediately after the owner bought the car (it is a one owner car). 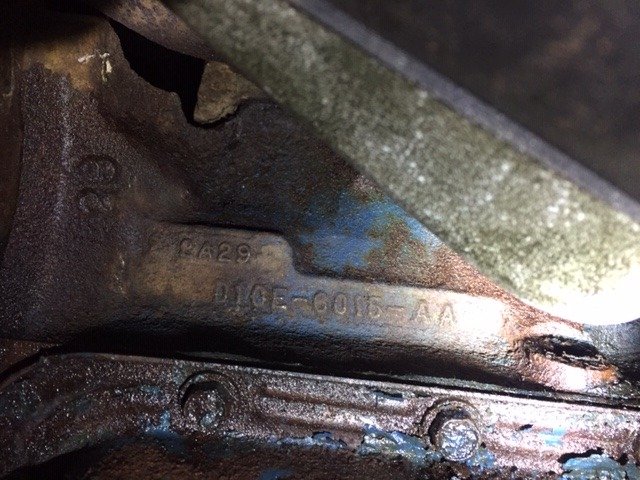 I have the car listed on this site. There are engine pictures there but not sure if you can see the heads or not clearly. Have sent the question to the owner.

I have the car listed on this site. There are engine pictures there but not sure if you can see the heads or not clearly. Have sent the question to the owner.

Thanks, I found the listing. The pictures show what appear to be Boss 302 heads. (They could also be modified Cleveland heads. Would have to check casting codes to verify.)

Dear Lord. The owner is like a 100 years old and it is 32 degrees where he is LOL. Where do I tell him to look for the casting codes on the heads?

Thanks. This is what we found. The engine was replaced almost immediately after the owner bought the car (it is a one owner car).

Look for screw in core(freeze) plugs. If it has the screw in plugs it is a boss block(or a well modified standard block)

2A29 is the number to read. That is January 29, 1972. So it would not have been in a 70 or 71 anything as a factory engine. But could be just fine as a replacement under warranty. Did the owner say when he bought the car? I know many of these cars sat on dealers lots for a long time. My CJ car was at the dealer for 13 months before finding a home.

That is so true because the guy selling it was a dealer in Livonia NY. He has a collection of about 40 cars tucked away. And he knows each of them. He was certain this was a 302 replacement because he is the only guy that ever owned the car and as a dealer sending it back to Ford was easy.

does he still have paperwork from when it was replaced? That might show the part number ordered.