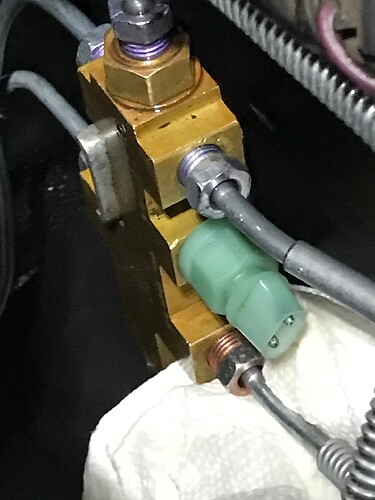 IMG_71321920×2560 187 KB
Hello everyone, I’m Brian and new to the forum. I’m restoring a 1970 Eliminator and I am currently in the process of bleeding the brakes. All components of the brake system is new, including a rebuilt Differential/control valve with the new seals. The piston is centered correctly to align with the warning switch. The problem I have is: when I try to bleed the brakes there is brake fluid leaking from the warning switch. I’m at a loss as to why this is happening. Any one else come across this issue? Perhaps I need the brake distribution switch tool? Or, is the bore so worn over 50 plus years the fluid bypasses the seals?
Any help would be greatly appreciated. I’ll post more pictures of the car as I progress. Need the brakes done, steering column installed next, then the rebuilt motor is ready to put back in.

The inside of the block has a pin, with O-rings, and if they get messed up inside, it’ll leak out of the switch. The O-rings may be fine, just out of place, as with mine, or they could just be worn and need to be replaced. Its unlikely that the bore would be worn down, as the pin inside does not move, or shouldn’t move all that much.

Here’s a link to when I cleaned mine out and re-assembled it recently.

I plan on replacing my master cylinder for one with a larger bore, so I figured while I was at it I’d replace the old adjustable proportioning valve that was stuck and no longer adjustable, and clean out my distribution block as well. The previous owner had a bit of a mix of parts, mainly from what must have been an old conversion from all drum to front disc. I’ve got a non 70 power brake pedal that has had the correct work done to the hanger, a Bendix Tear Drop style booster, a distribution bl…

If you have new seals, you may just have it all in the wrong order, or they just haven’t seated well for some reason. The pin inside has a short side, which goes on the rear brake side, and the short side has 1 O-ring, then the divit or valley where the switch stays, and then it has a brass ring, then another, slightly larger O-ring.

Thanks for the response. I pulled apart my valve twice to check again the order of seals. It is arranged as in the photo. Still no luck on stopping the leak. Maybe I’ll purchase another rebuild kit. Could be poor seals in first package.

I see you have a different block than I do, I believe my block had been swapped out at some point by a previous owner, so there could be some trouble with that block specifically that I wouldn’t know about. My experience was that once or twice, it leaked through the switch, and then after taking it apart and rebuilding it a few times, it happened to seal correctly and hasn’t leaked since.

If you’ve got the plugs to put in the holes, it may be good to take out the MC, and the lines from the MC to the block, plumb it together, with plugs in all of the outlets of the block, and then it’s similar to bench bleeding with plugs in the 2 ports of the MC, but with the lines so that you can test if the switch leaks, without having to install it in the car just to test it. I did this, since taking it out and putting it back into the car over and over again is much harder than testing it outside of the car.