The flexible part of my passenger side A/C duct is deteriorating and I want to replace it.

I’m expecting to remove the dash pad. Does removing the kick panel aid in access to the vent opening end in the lower dash?

No need to remove the kick panel.

You can find flex duct at WCCC part #14221 and I think dash pad has to come off.

You can find flex duct at WCCC part #14221 and I think dash pad has to come off.

You can buy the Flex Tubing from Advance Auto Parts online, 2 1/2 inch Diameter

Much Cheaper than WCCC (sorry Don)

enough to do the whole car. Yes, remove the dash pad to get to the duct work. 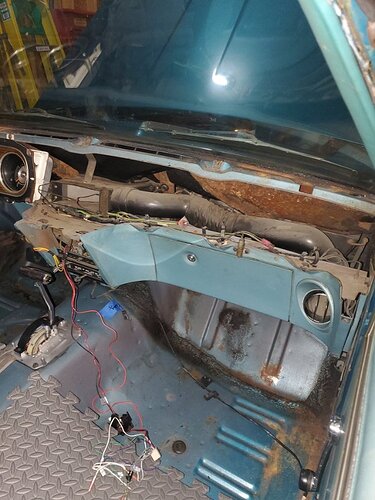 Assuming it’s similar to a '68…Maybe inspect the retaining clamps and make sure they are in good shape as well.

Thanks on the tips for the flex hose, and the picture showing the corner. I think part of my challenge is due to a courtesy lamp harness, power top, and power window harnesses running through that area. Rather difficult to get my hands through there.

How do you detach the duct from the louver assembly? Is it a bayonet attachment? Or is there a plug similar to the plenum end? I’m reluctant to go in and start applying pressure to 50 year old plastic pieces.

Gaugster, no retaining clips on the 69, they’re “stapled” to the plastic tubes! Don’t try to remove the staples, the plastic tubes will break. I just trimmed the flex tubing off and slip fitted the new over the ends of the plastic. and used DUCT TAPE for it’s intended use!

For the connection to the dash vent, Its’ just a push on over the flange, there is a friction clip that holds it in place, a gentle twist and pull will take it off the dash vent, no tools required.

there is this support/clip on the tube also (I forgot) more gentle persuasion, it’s attached to the plastic tube its attached on the top to the lower dash( you will see it) another reason the dash pad has to come off. 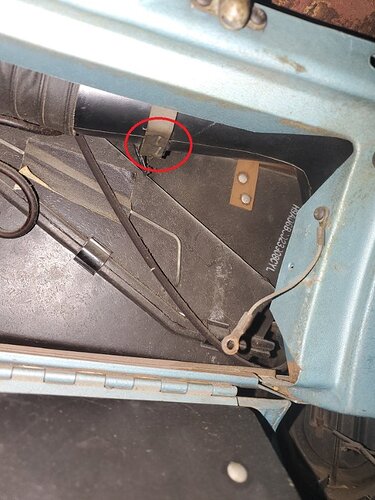 LSR Mike - Thanks for the clarification and pointers. Just make sure it’s ‘200mph Duck Tape’.

LSR Mike - Thanks for the clarification and pointers. Just make sure it’s ‘200mph Duck Tape’.

Gauster,
You must have one hell of an A/C Blower

I finished this one a couple hours ago. Was writing up a post to show some of the things I learned when the damned browser closed just as I was ready to submit.

Short version of the long post I just lost.

Here is the clip that grips the plastic vent.

I ended up removing the louver assembly. This meant separating the two halves and drilling and tapping three 4-40 holes for cap screws to hold it back together. That simple sentence took several hours to do. the metal in the pot when they made my louvers housing was mostly aluminum judging by the way it galled my drill bits.

Thanks to LSRMike for the pic’s, and all for your replies. 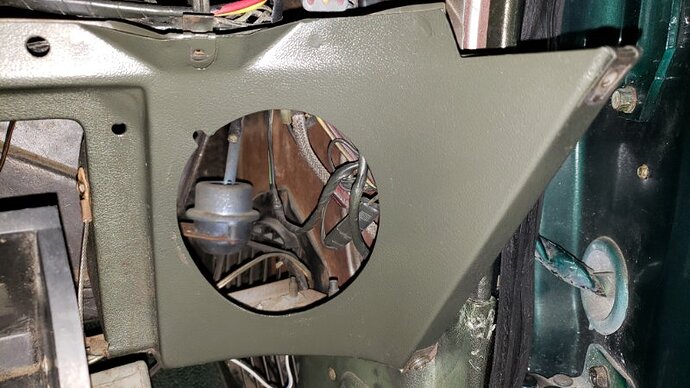 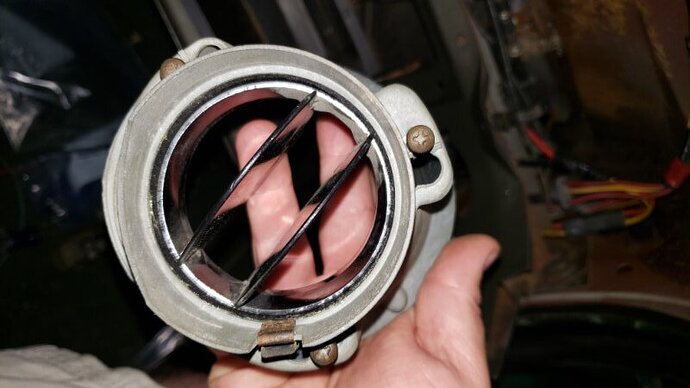 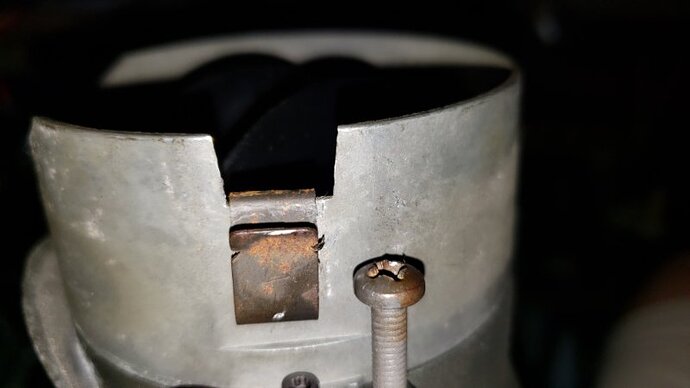 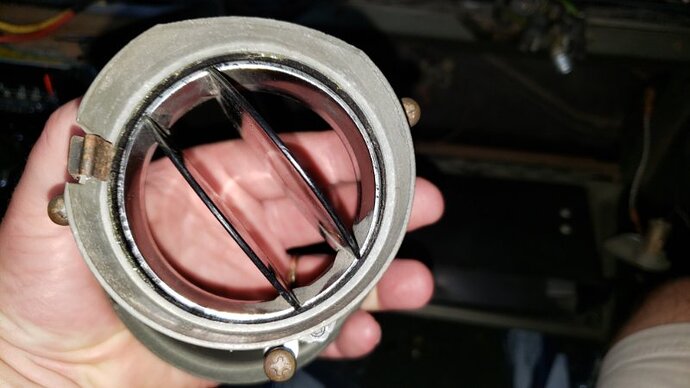 How do you get the louver “ball” out of the vent assy ?

mine are broken, do they make replacement balls with out buying a completely new vent assy ?

I haven’t looked for the ball separately. Maybe some of the more experienced members can answer that. Many cars of that era used that louver style. You would need to know the size and check in some of them. I recall Chryslers having that style. Unfortunately it’s not like we can walk into a salvage yard and find them just waiting for us.

To get the ball out, you have to grind off or drill out the peened over nubs to separate the two halves. The ball is captured between them.

Does anyone have an idea for how to hold a piece like that so you can work on it and keep it square to your drill? I held mine with my hands. It’s a minor miracle I got the holes as square as I did and didn’t break a drill off in a hole.