Thanks Bill I do have another pump so can try replacing that again (not really sure exactly where it is spitting out of it but it is not foaming/aerated at all)…the other thing someone mentioned is replacing the gear box??? That is really the only piece that has not been replaced…this is really frustrating!

Thanks for all your help!

BTW…there is no grinding noise when turning the wheel…it does not sway to any one side…in fact it steers pretty smoothly and normally…if it were the gear box I would notice something mechanical sounding no?? Thanks!

It sounds like you are using some other type of fluid instead of the proper Type F. I recommend sending all the components to Chockostang for rebuild. Then use nothing but Type F fluid.

The steering gearbox won’t be leaking PS fluid. None goes in there. The assist is in the hydraulic ram, directed by the control valve.

I was going to suggest what Royce said about the fluid. Make sure it is a good type F. Not sure of a brand, as I’ve had good luck w/ basic from the likes of walmart, Checker (o- really?) and brands like Valvoline. Again as Royce has said many times ONLY type F is acceptable (in power steering, transmissions & convertible top pumps)!!

Seems the basic must be determined… Where is it leaking from exactly.

So, Clean like crazy. Use clean white paper towels until nothing shows. Run it for a few minutes turning both ways a few times. Shut off & immediately start touching w/ new clean towel. This really has to be done as chasing & replacing is not working.

Hang in we will figure this one out!

If not said here make sure the oil is not foamy. Once the bubbles pop after the fluid is at rest you can get a pressurized pocket of air built up in the control valve and/or slave and returning it to the pump all of a sudden after starting can send fluid flying out of the dipstick. You would have some substantial whining noises while engine is running if that was a possibility…maybe post a video with the engine running so we can hear. Not a lot of places for you to pick up air in this system, but pump input shaft seal would be my #1 thought

Thanks Bill and all…fingers crossed…power steering pump was replaced again and so far so good…running fine with no leaks and does not seem to be building pressure when turned off…time will tell but hopefully this is the end of my PS issues!

@Cougar_Bill @EliminatorClone @Royce Well look who is back! GRRRRRRRRRRRR…was fine for a few weeks sitting at the storage facility after the 2nd PS pump went in and even when moved around there…thought that the problem was solved.

This is now the 2nd PS pump, all the hoses and lines, the master cylinder/boot and control valve have all been replaced and the proper Type F fluid was used…any other thoughts before I bring it back to the shop again? 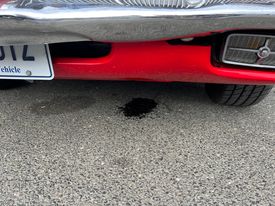 Have everything rebuilt by Chockostang properly.

I just solved a on going leak on a 70 cat. It had nothing to do with the system, but the housing of the pump. In 1970 the return (low pressure) inlet has a strap spot welded to the housing. It protects the return pipe from damage.
To find the leak, the pump was removed & the high pressure & return were connected to each other. I used compressed air to pressurize thru the dipstick hole. The leak showed the spot weld was bad & had a hole when it was built, or damaged when shipped.
SO, find the source 1st!!! white paper towel will tell. Wipe it down, use grease wax solvent so it won’t remove paint. This is a must to find the culprit.

That is great thanks Bill…this was the second one bought from RockAuto so hoping that is not the issue…but good insight…this is definitely a tricky one! But they do now need to get it up on a lift and try to recreate the leak and see exactly where it is coming from. Thanks man!

I fought a leak on mine for months. It kept dripping from the pump bottom front after multiple replacements of the pump tank O-ring. Turned out to be the front shaft opening. I was surprised to find no bushing there - just a lubricated hole in the front pump housing. Easy to overlook during a rebuild, and hard to find the source of leak from under the pulley. Replaced the pump front casting with NOS and fixed the problem! I bet this is a common leak source on our cars.

On my '70 I had a leak in the high pressure hose that somehow only leaked at a very specific spot in the lock-to-lock cycle of the steering wheel. I finally had to put a video camera under the car and slowly turn the wheel with the engine running to find it.

Thank you…going back into the shop on Monday with the goal of seeing EXACTLY where it is leaking from…trying to force it to leak…we think it is the PS Pump (both purchased from RockAuto) but need to know for sure before proceeding…almost the entire system has been replaced at this point…VERY frustrating!

The problem is the stuff from Rock Auto is mostly made in China with little or no quality control. I hope you still have the original stuff. It can be rebuilt endlessly with good results, usually much cheaper than Rock Auto.

Thanks man…found a guy here in CT who specializes in 'Stangs and Cougars who believes he has one he can rebuild…I am beginning to think you are right…Rock Auto pumps may be the problem…several people have also told me to give Lucas Power Steering Stop Leak fluid a try…that it really works long-term…thoughts???

Use of any fluid other than Type F will result in foaming and trash the pump.