Anyone running 194 LED bulbs in their dash cluster?

When I put the dash back together with my new cluster repro PC (and the dash pad back in - which will now come back out arrrrrgggh), one of the dash backlights was out, the bulbs are all good, just seemed to have some bad contact with the sockets with the new PC for some reason. I missed the one back light being out, they are kind of dim (and of course it is in the middle upper, under the high beam indicator). When I looked at the dash in a dimly lit garage (how romantic!

), I found it and reconfirmed how dim the backlighting is, even at highest setting.

So, yesterday it occurred to me, why not upgrade at least the backlighting bulbs to LED? So I went looking. I like (and ordered 10 of) these: 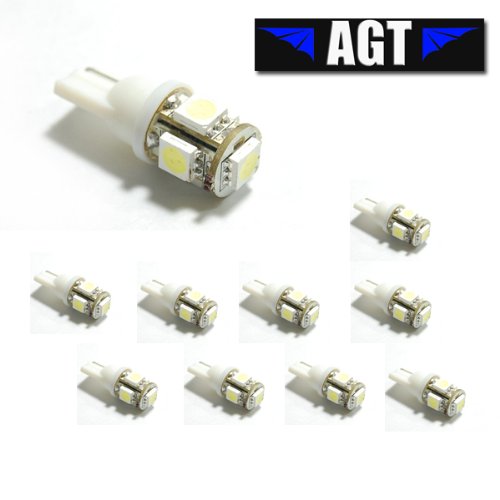 I highly doubt they are German LED’s (AGT = Advanced German Technology, probably some weak Chinese attempt at marketing?) but figured they had some slim chance of being better than the Chinese crap you can buy from a zillion places on feebay.

Anyway, I think I will have to/want to remove the blue diffusers from the cluster housing (because these LED replacements are about 1.125" in length, longer than the 194 bulbs and will hit the diffusers). That and I read somewhere that the idea of the diffusers originally was yellow light, blue diffuser, greenish light? We’ll go for straight white (ordered white LED’s) and see how things look.

Think I made a good choice of bulb type/configuration (amongst the many), 4 large chips around the sides and one on the end. Should (I hope) throw a lot of light around as the originals do. I looked at the 10 chip and 20 chip configurations of this type too but went with these figuring less cheap Chinese chips to burn out? I know some people have tried other bulb configuration types and the directionality of those types was an issue.

So what has peoples experience been?

Oh, and do these LED bulbs dim okay with our headlamp switch dimmer rheostats (or at least dim somewhat, I figure they might just turn off below a certain voltage)?

Can’t answer as to those, since we’re different years, but, I love the LED’s in mine. I hit the “easy button”, and just ordered the kit from Mustang Project.

Yes, diffusers came out as recommended by MP, and they throw a ton of light around. The MP ones are just single-direction, one diode on the end type bulbs, so, I can only assume that those you picked will REALLY throw it out.

What color did you get?

Does your cluster use 194/168 style bulbs? These are peanut shaped, all glass with a “spade” glass base with a thin wire on either side.

How well does dimming using the headlight switch work?

I forget the number for the cluster bulbs on the 68’s, but they aren’t spade…

I used the Ultra Brite Blue ones.

I can’t honestly say that I’ve even TRIED dimming them, yet! DOH!

Granted, I dont have a stock cluster, but I do have 194’s in mine. They shine great, even though I used the kind like Todd is talking about, much better than incandesent bulbs. They dont, however, dim. I did figure out though that if leave just one incandesent bulb in the dimmer circuit, that they will dim properly. Not sure, but if the ash tray light is on the same circuit, it will work. Or if you dummy an easily accessable bulb into the circuit. OR, autometer sells a devise made to allow the dimmer to operate the LED’s.

I have tried these in my aftermarket gauges in the 69, also the single large LEDs and the ones with the multiple small LEDs

Tried them in the Eliminator and went back to globes, after I cleaned up the inner panel. I still have LED’s in the 69 but the gauges allow the light to shine through the back of the lens

The IV curve for LEDs is steeper than it is for incandescent bulbs. You will get some dimming capability from blue and green, but not much from red. I don’t understand why having an incandescent in the circuit matters.

The IV curve for LEDs is steeper than it is for incandescent bulbs. You will get some dimming capability from blue and green, but not much from red. I don’t understand why having an incandescent in the circuit matters.

Got my package and tried them out. Plenty of light (too much?) and they dim very nicely cranking down the voltage on the power supply I was using. As for why an incandescent lamp in parallel would aid in dimming, I think I understand why. The incandescent draws considerably more and creates the needed voltage drop (by virtue of its current draw) across the dimmer rheostat. If the lamp were not present, the LED’s perhaps do not draw enough and so the rheostat resistance is not enough to create the needed drop in voltage at the current the LED’s draw. Will report back with results with the little buggers installed into the cluster.

I measured the current draw of a 194 bulb and one of my 5 chip LED 194 replacements this morning before I left for work. The 194 draws about 260 mA and the 194 LED replacement 60 mA. So the LED draws less than 1/4 of the 194. Hoping the dim function will work without having to add a dummy incandescent as Mike mentioned, but will keep that in my quill should it be needed.

Got the LED dash backlighting installed tonight, looks real good, white like original (with diffusers removed) and bright. As some said, the dimming range is minimal, but don’t think I really need more anyway, I LIKE being able to see my gauges and what they say! There are two clock lamps, the AC/heater control light and prehaps a console light (didn’t look) as well so perhaps those being incandescent is helping with providing some dimming capability. I am very happy with these LED bulbs for $1.50 each (in a quantity of 10), the 69/70 XR7 cluster uses 5 for backlighting.

So yesterday when I was ordering a few parts for enhancing the ELFI designs functionality, I thought why not order a “ballast” power resistor to draw the missing current left from using 5 LED lamps where 5 incandescent used to go in the dash (to make dimming more like it is with stock 194 bulbs). My LED’s draw 60 mA each, so that’s 300 mA total, while the stock 194’s draw about 250 mA each, so about 950 mA less current is drawn. 12V/.95A = 13.47 ohms. I ordered a 50W (was cheaper than the 25W), 12 ohm power resistor, overkill, but will keep cool that way, only about 13.7W will be dissipated in the resistor. Result should be just-about-like-stock dimming on the headlight switch rheostat. Will let you all know how the experiment turns out.

Just finished experimenting with BA9S LEDs in the 68 dash

My dash is nice and bright, decided yesterday to order up the above for the AC/Heater control and Clock.

Viewing at work = “X Image”, will have to see what this is all about later Al.

Smileys are evil. I must be protected from them…

Just so you don’t have to agonize over it, it’s a smiley with a sign that says “This thread is worthless without pics!”

Just so you don’t have to agonize over it, it’s a smiley with a sign that says “This thread is worthless without pics!” 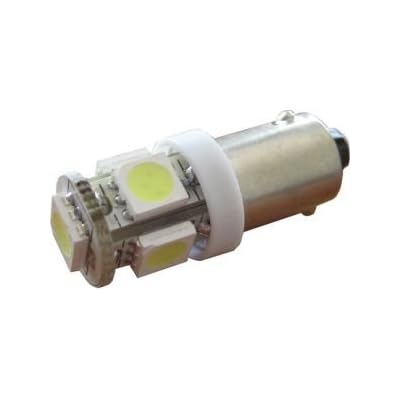 And the site I posted earlier is the cheapest place I have found to buy them (other than waiting for them to come from China using feebay auctions). It was actually cheaper to buy on the eversale site than to buy through amazon (shipping was less for some reason).

Nah, too easy. I want pictures of the dash!

Oh, okay. I have not taken any with the new-fangled LED 'thangs in there, but will do that, just for you Al.

Do you run without diffusers by choice or because the diffusers wont fit over the LEDs? I would like to do this, but I like the original blue-green color.