I own a 1971 Cougar Convertible with a basic, 240 bhp 351 Windsor. Soon, due to high oil consumption (about 500 ml for 100 km!), I’ll be rebuilding engine, which will get 0.04 overbore pistons. And, I thought about increasing compression ratio, to gain a little power.

So, does anyone know how much can I skim the heads safely, to avoid knocking on regular, 95 octane gasoline, and- what is even more important- to don’t let pistons “meet” valves?

Engine is all stock, with stock camshaft, 2bbl carb etc.

If you are rebuilding the engine anyways why not just get a set of flat top pistons to bump the compression? If you want a little more power get a different cam. The stock cam is very mild.

I would not recommend milling the heads any more than .030" in order to preserve enough deck thickness so that warping does not happen.

Thank You for Your replies;

My engine is definitely Windsor; was Cleveland more common? What about 1971- car is model year 1971, but probably was built in 1970- some documents say so (I had many problems during the registration…) and, on the inner part of the dashbord is a stamp which says “september 1970”.

What about the pistons- I bought a set of them from rockauto and now I’m waiting for delivery; they should come in a month or sth. In fact, I didn’t knew that different pistons exist.

You’ve said that I should change camshaft- but won’t it change characteristics of an engine? Won’t it loss a torque at low RPMs, gaining at high? Won’t it be problem for a standard, automatic transmission?
And- which camshaft would You recommend?

IIRC the 71 only came with a W 2bbl engine. More performance is usually a subjective question, for me it all falls on how big / fast and how much I have to spend. Good luck

Jakub I think it might be a good idea to slow down and hold off buying anything until you do a bit of research. First off what is your plan for the car, is it a daily driver, or a fast street car or what? When you said more power but run on 95 octane without detonation I assumed you wanted as much power as you could and still run pump gas. I could be wrong but it sounds like this might be your first windsor build? Or maybe engine build period? If you say what you are looking to get out of the engine I’m sure we can point you in the right direction. Also post a car and engine bay picture. I’m sure we all want to see what you are building

Car would be a summer daily driver, so I want to do only minor modifications, to gain 20, maybe 40 horses. To make that car accelerate a bit quicker than my granpa’s 1995 LPG-powered Camry.

First of all I wanted only to rebuild the engine, bought necessary parts and after that got an idea of skimming heads, as I knew it was popular modification on old cars such as Fiat-126p, 125p, Skodas, Ladas and all that crap.

Also, I heard that due to federal emission regulations, cars from 1971 had lower compression ratio than in 1969-1970, so the basic idea is to get a ratio from older engines (8.1 in 1971 and ~~ 10 in 1969?) And, due to limited availability of parts, cost of shipping that almost doubles the price of parts from US, import taxes etc. I’d like to use parts that I already have.

Yes, thats my first Windsor, before that I worked only on GAZ M-21 engine, in which milling & porting the head was the easiest and only way to get more power.

I’ll post photographs in two weeks, as soon as I’ll be back home.

Thank You for Your replies;

My engine is definitely Windsor; was Cleveland more common? What about 1971- car is model year 1971, but probably was built in 1970- some documents say so (I had many problems during the registration…) and, on the inner part of the dashbord is a stamp which says “september 1970”.

What about the pistons- I bought a set of them from rockauto and now I’m waiting for delivery; they should come in a month or sth. In fact, I didn’t knew that different pistons exist.

You’ve said that I should change camshaft- but won’t it change characteristics of an engine? Won’t it loss a torque at low RPMs, gaining at high? Won’t it be problem for a standard, automatic transmission?
And- which camshaft would You recommend?

That depends on the profile of the cam. For a mild build, a comp 268H, a few XE grinds 256, 262, would be great. The crane energizer 272 is a good one. All give you a nice boost without the need for a higher stall converter and will work good with a relatively high gear (2.75-3.55). The XE series ramps up quicker and doesn’t bleed off compression like a straight or mare traditional grind so you will have a higher dynamic compression ratio which builds torque. There are many grinds and I would suggest those or standing on the shoulders of other with cam experience, and if all else fails to whet your appetite, call a few cam manufacturers to get some recommendations.

If you’re looking for more of a cammy sound, the comp 270 magnum will sound great, works with a stock convertor, and runs great if you match the intake carb and exhaust to it as a package. I think that’s where people screw up with cams, they go too big for a combo. Same with intake manifolds and carbs.

Never heard of a '71 with a Windsor from the factory. Have you checked for partial VIN on the block?

I found photographs that were taken during registration process. Engine has some minor changes, probably made by the previous owner or even his predecessor- it has changed air filter and installed electronic ignition.

And, by the way- how to turn on windscreen washer? 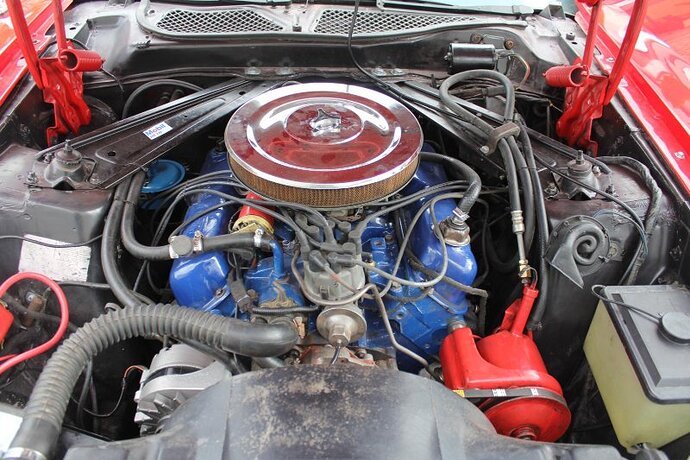 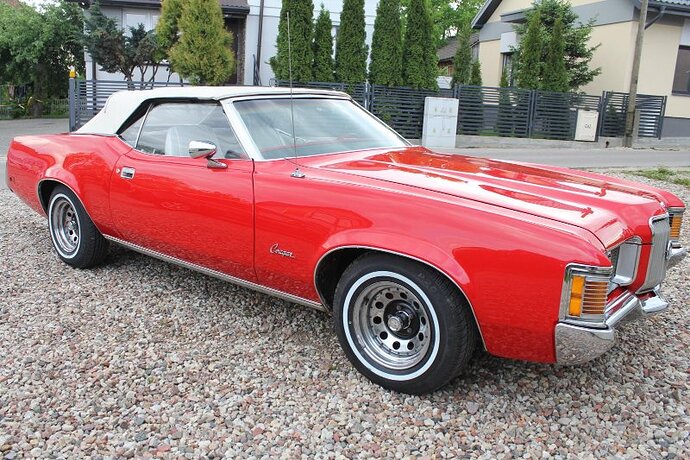 I wouldn’t take Wikipedia as gospel as all anyone has to do is login and they can edit. Even if that edit only stays on for a couple of minutes the misinformation train has already left the station.

I once signed in after reading some info on one of my favorite bands and wrote something to the effect of “Although only performing with them for a short stint, they never sounded as raucous as when guitar legend Al Adams handled lead guitar duties.” My fiends got a kick out of it for the 2 minutes it was up, but somewhere someone was going “Who the hell is Al Adams?” And the bad information train went full steam as an inadvertent result. So take that site with a grain of salt.

I’ll go out on a limb from your engine pic you have a W.

On the other discussion, I too have read many different articles saying the W was the standard issue engine in 71, the C and the 429 could be options. The H in the vin could be either a W or a C 2V. Is getting a Marti report the only way of knowing what your car came as?

I’ll say Windsor too. At least from the pic it looks like the thermostat housing is mounted to the intake. Yeah, it is. You have a Windsor. The Clevelands go into the front of the block. Whether or not it came with your car is beyond me.

Now to the head skimming: If you’re rebuilding it anyway, why not go with a higher comp piston? Any good machine shop should check your block and heads for straightness, and just decking the block along with cleaning up your heads will put the piston further up in the hole. Just be sure if you do go with a higher compression piston that you or the people who rebuild it cc your heads and order pistons that will keep it pump gas friendly with what your combustion chamber size ends up.An engine w/ 9:1 with a good advance curve will run better than an engine w11:1 and a weak slow curve to keep it from detonating. Our gas is so bad here that I am barely getting by with the modest curve I am running.

What I would recommend is to do a clean-up cut on the heads. Then surface the deck of the block for zero–meaning the top of the piston comes up even with the top of the block deck. Most head gasket compressed thickness is .040 which is very good piston to head clearance—give the proper quench. Then, I’d recommend buying a piston with what is called a “reverse dome”. That is a dish in the piston that mirrors the dimensions of the combustion chamber. In turn, the flat area on the cylinder head next to the D shaped combustion chamber is called the quench area. Using a reverse dome piston maximizes use of the quench area, making for an engine that can have more compression for a given octane rating. The actual compression will depend on camshaft specs. Camshaft specs will depend on vehicle specs and intended usage.
One other thing. Instead of reworking the cylinder heads you have, you may want to look into a set of after market heads. Either cat iron or aluminum. Chances are you will spend the same amount to start off with a better head as all the work it’ll take to bring your heads up to par. The better head will make more power. One thing you may want to look for is a set of 1996 Ford Explorer 5.0 heads. These were also found on the 93 GT Cobra Mustang. These are called GT-40 heads. You’d want to get the ones that have 3 vertical bars on the front. The successor to the 3 bar GT-40 heads was none other than the 4 bar head. These were called GT-40P. They are better, but you will have to get headers that are made for GT-40P heads. Easier to get the 3 bar heads.

Not sure about fords but I was told years ago if you mill the heads to much on a GM, the intake needs to be milled also.

If you mill the intake or block deck on any V-8 the intake would need to be milled for proper fitment. Of course it depends how far you mill whether it’s required or not.

Thank You for Your responses;

I think that I’ll keep a stock camshaft- simply because changing cam requires new valve springs, lifters, adjustable valve train etc. which makes it a 600$ investment. Or, maybe I’m wrong and all I need to change are cam and lifters?
By the way- what do You think about Lunati cams? I wonder if the BareBones 280/290 would be a right choice?

Also, I’d rather re-work stock heads, due to fact that for any heads I would pay >350$ and shipping, taxes would take another 200$. Milling them would be no more than 50$, maybe 70 with intake.

So, what I’m going to do:
Keep the engine stock, except:
-boring the block for 0.04 oversize pistons
-reducing deck height by 0.023
-milling the head by 0.02
I expect to get compression ratio around 9.8:1 which seems to be quite safe.

Lunati makes a great cam. Used their Bracket Master series more than once with great results. A lot of circle track guys use their products so that speaks to their durability. That cam is listed as 1500-5500 rpm range so I would pull the trigger. You might look at their voodoo series. A few of the guys at the cruise ins use that line and love them (more power under the curve). Part number 10350702, 262/268 advertised duration, 219/227 @ .050, .499/.522 lift 1400-5800 advertised rpm range. What I like about the comp xe line (it seems that the voodoo series is meant to compete) is that they just feel more responsive than a more traditional grind. A comp 268H is also a great street cam.