I made a sharp turn. Weather conditions are cold & the fluid level is a little bit low.

I put in type F fluid & got it back into the X marks on the dipstick with the engine fully hot.

On my previous 1970, all attempts to repair it failed.

I noticed that WCCC had a power steering to manual kit, but I also thought they had an upgrade that involves an actual Borgeson power steering box and Saginaw pump.

Who has this upgrade & how much does it cost? How many hours of labor does a mechanic need to install it?

I also have that tilt away column in the vehicle.

What you are looking for can be found here. www.jegs.com/p/Borgeson/Borgeson-Complete-Power-Steering-Conversion-Kits-for-Ford/2885307/10002/-1
You can also find these kits on E-bay. They are not to bad to install with standard st. column, I have not tried them with tilt.

Thanks a lot. The tilt column is also a collapsing type as far as I’m aware for 1968.

I was looking at my vehicle. I think a sawzall or cutting wheel could do the column. A hacksaw would be miserable but could work.

If I put a manual drag link on, do I also need an idler arm or pitman arm to go with it?

If I put a manual drag link on, do I also need an idler arm or pitman arm to go with it?

Yes , your best bet would be to screw the control valve off and use an adapter and the rest will stay the same.

This all you need to change after removal of control valve and slave cylinder and hoses.

It’s listed further down the page.

Of course, there is also the possiblity that the power steering pump died and replacing it might fix it as well. I have no strong feelings about having power steering one way or the other. It boils down to what is the most or least annoying job to perform.

Now that the power steering died, the handling is much better and it doesn’t wander as much in the traffic lane.

I was never trying to" steer"you one way or the other, I was just trying to answer your questions.

Since I want to get this vehicle inspected, I might as well have a mechanic look at it since either way its a trip to the shop.

In terms of the value of the vehicle, it’s probably worth more with power steering, (not selling it however)

Having it he able to pass inspection and actually use it as a daily driver will no doubt be a good thing.

It runs, starts, and drives just fine no matter how cold it is. It’s silly you have those historic tags if it’ll easily pass (which I think it will)

I love my Borgeson. Easy install especially if you have a collapsing steering shaft. I used the adapter as I don’t think the manual drag link will work with the power steering Idler arm. Also, make sure you measure the size of the shaft that comes out of your original steering box so that you buy the correct unit that will work with your pitman arm.

I have installed multiple Borgeson units and the 1968 Cougar/Mustang is a breeze due to the collapsible steering shaft. I to would go to the manual pitman arm and the manual drag link. Looks way better. In my experience you will need to go to the Borgeson power steering pump. The early Ford pumps do not have enough pressure. You can run into some fun if you have headers on your car. The Borgeson unit is a bit bigger and can contact aftermarket headers.

I have stock manifolds & they are super tight to the engine.

The stock unit is super light even at 1 mile per hour. If I’m on the highway the car is super sensitive even if I’m tapping my fingers on the steering wheel listening to music, downright scary!!

This would be like an under driven pulley that you see in some other applications. Using slightly less power might help the other parts last longer.

That would only be necessary if I opted to retain the rest of the stock system. Cost is a factor. The Borgeson system with it’s upgraded pump is $1000.

Getting a new power steering pump might be worth a try. I could always get lucky!! A rebuilt pump and maybe a larger pulley would be a lot less money.

I agree the stock power steering seems a little over boosted for my taste. How is your alignment? Mine was way out of wack and it was scary to drive at any speed as the steering was way too light. My suspension is all tight so not a matter of worn parts.Getting the alignment in check was a big help and tightened it up a lot. I still don’t care much for the feel still and want to upgrade to the borgenson setup but I have a manual and need to decide on some other upgrades before going this route.

The wheel alignment is fine. I realized that I set my idle speed very low, just high enough not to stall to keep it quiet for the neighbors. When it idles faster, now it works. Basically it came back to life just as mysteriously as it stopped. I might’ve had some air caught up in the system from the sharp turn.


You gotta admit it, pretty quiet once you turn the fan off. Other good news, no leaks of any type whatsoever…

Still, I’m pretty sure that’s enough power steering to BS the shop into inspecting this OK. I raised the choke idle speed (idle choke closed only) & that works. I’ll go back and get the other one a little bit higher, just another screw to turn…

It’s also worth noting that the headlight doors go down faster when the idle speed is raised. WCCC does sell a tach that goes right into the dash on the base model and it’ll fool practically anyone into thinking its OEM. Item 11938 costing $160 & change

The power steering has returned after turning up idle but now there’s another problem.

It looks like all the hoses are leaking from the control valve that goes from the pump to the cylinder.

This only happens when the engine is running and gets worse when the steering wheel is turned.

Iis there a method for trouble shooting these? Will tightening the hoses as a first step make it worse?

I already got the proper hose wrenches that grab the hose retainers without stripping them.

Most puzzling is that the hoses appear to be tight and straight.

It drips under the control valve.

I just went out there & tried to tighten it. I know which one it is. It’s the power hose from the pump to the control valve.

Tightening it didn’t work. That means 2 possibilities. Either the hose is damaged and replacing it will work OR the control valve is cross threaded or damaged in which case essentially the whole thing except for maybe the cylinder and pump (center link + all hoses have to be eliminated) 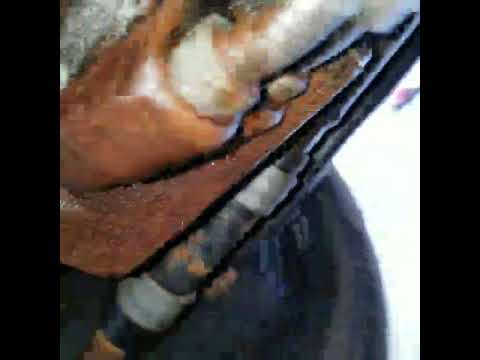 Aside from the leak, it works nicely.

The return hose looks OK but the price for the combo is reasonable. I also put the check valve for the vacuum system on there as well, which I thought I already ordered but was still in my cart.

Aside from the leak, the rest of the system appears to work which is an encouraging sign. Still, I should probably pull it off the road until I fix this and the partially collapsed gas tank.

The high-pressure line (your leaky one) is the one that usually blows when you turn the wheel all the way to the stops. It’s trying to help you, and gives more help, the more resistance it encounters - so when it hits that stop, if you crank on it with any real force, it’s going to put all the pressure it can muster into that poor hose.

With an old one, that means “Kablooey” along with a big leaky red mess. Ask me how I know.

You are right about the steering being ‘over boosted’ by today’s standards, but I have to say, with better shocks, the Shelby drop, and a stiffer front sway bar, you do get used to it. It may not be what your average racer would expect, but it does well in any conditions I’ve experienced, and it’s nice in parking lots at low speed. I kind of like Mercury’s version of ‘fingertip driving comfort’, having driven it for so many years.

The whole thing is supposed to be new. So each and every time I hit the stops, kaboom?

It’s too bad that there is no pressure bypass valve to prevent that.

I should keep it under 100mph anyway

WCCC has a package deal with both the power and return hose. I’m assuming that all small blocks are the .25 inch size, not the 5/16ths.

The Saginaw pumps are supposed to have power blocks that govern how much max pressure that they actually put out.

I’m not talking about swapping out the entire system, just a slightly less powerful unit.

You would think that the OEM type of power steering pump itself could be hydraulically controlled for max pressure. Like say it maxes out at 150 psi. Isn’t there a way to turn it down to 100psi? I know if no hidden adjustment.

(I’m not sure what the actual pressure is, just asking hypothetically)

Maybe the cougar pump is actually intended for a much larger heavier car or one ton pick-up or whatever ???

All good questions. Seems to me that theoretically, the hoses should hold full pressure from the pump. But whatever the cause may be, I know that turning hard against the stop is always when my hose has blown. So, I learned not to. Only took me two times (and the 2nd time was an accident, but reinforced my theory about what was causing the failure).

If you don’t do that, then probably, it’ll run for a long, long time.

You might want to change the seats in the valve ports where the flared ends of the PS lines seal their connections. They can wear, which can cause the leaks. Note: The threads do not seal these connections, the flared end of the tube inside the fitting against the seat does.

How are they removed and replaced?

I’d like to see a write-up or video on that if anyone is aware of one!