The Top Cat is on the way back

When I bought this car in 1970, it was a “demonstrator” with 2400 miles on the clock (probably a 1/4 mile at a time). The dealership that sold the car to me, Harmon Mercury in San Bernardino, CA, said they had raced the car under the name of “The Top Cat”. Eventually, I ran into financial difficulty following a divorce and pay issues in the USAF. In November of 1971, the bank took the car back and it disappeared from my life.

In 1986 I bought a Mustang SVO because its 5th gear acceleration was reminiscent of the Cobra Jet acceleration of the Cougar. 30 years later I was re-acquainted with my old Cougar and ended up buying it back which makes me the 1st and 4th owner (the 3rd owner had obtained the car at an estate sale of the 2nd owner). It still has the same license plates that I put on in 1970 as well as the splash guards I also installed back then.

Upon getting possession of the car I noticed that the 2nd owner had done nothing but race the car without any attention to the rear axle. Needless to say, the rear-end was loose and the spring perches were rounded, the axle housing had deep grooves from the loose U-bolts, the floor-board of the rear seat area had been pounded by the pinion due to the rear-end being loosely held in. Fast forward to today, rear-end repaired and completely rebuilt. The day before Christmas, I delivered the car to Jorge who will do his magic on this rare cat. Pictures follow…

very cool history! I like hearing the story’s about reacquiring the same car decades later! Very cool yours is basically the same car it was when it left your hands all that time ago. How often does that happen??

Is it odd I recognized that tow truck?

Did some work on it not too long ago

The Top Cat has been named “Project Freddy (Cougar, not Kruger)” and is progressing nicely. Here are some shots of it in primer. This body is ALL steel and without dents or imperfections!

Please fill us in on the story on how you were able to relocate it!

Actually the car sort of “found” me. My granddaughter texted me a picture of a newspaper car page from the 1970s and said “Hey, grandpa, How’s this for a throwback?”. Well, the car prices were very low, less than $3100 new and they had a 69 Shelby for $2850…etc. I thought to myself, I’ll show her a picture of the muscle car I used to drive, that’ll shush her.

So I found a picture of a yellow eliminator and I was going to download it but it took me to this website (classicougarcommunity.com). I looked around and checked out the production numbers and was amazed at how rare my car had been. I chatted with a fellow and mentioned that I once owned an Eliminator when it was new. He gasped and asked me what the VIN was. For crap’s, sake; that was 50 years ago, all I remember was the license plate. He gasped again and said he knew the car and it had just been sold at an estate sale.

So I did some detective work and finally located the new owner because I wanted to tell him the war stories of the car when I owned it. We became friends and after a couple of years I asked him what he was going to do with it. He didn’t really know, maybe fix it up, or sell it to the original owner. So a few days later I decided to buy it from him which makes me the first and fourth owner. Apparently it had been sitting in owner #2’s garage for 35 years or so before owner #3 got it.

I did start it up after prepping the motor and all and we had 72 pounds of oil pressure, no smoke, no blow-by and 18 inches of vacuum. Still has not been driven as it needs some mechanical help (which is now complete).

Don, all of the parts I have been ordering will be going on this car! Thanks!

PS. I bought the car sight unseen other than this picture of it that owner #3 sent to me.

Here’s the thread where Chuck posted that he was looking for a picture of a yellow Eliminator. He was close enough with the plate number, and luckily it was still on the car when the pic was taken.


Hey Chuck, here’s another nugget for ya! Show your Grandaughter THIS ad for your old Eliminator when it was listed for sale in Oct 1970 (*Got this from Phil Parcells recently). They typo’d the VIN a bit, but that’s your car at Harmon Motors.

I thought the “YOUNG at Heart” thing was quite the interesting coincidence, wouldn’t you say?? 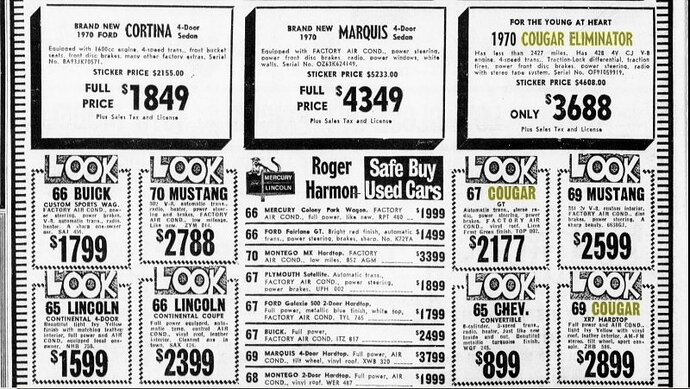 This is such a cool story and the ad is fantastic! Thanks for the great postings!

This would be a great story for ATSOTC Magazine. I can’t wait to see more photos and especially Chuck behind the wheel again.

You should email a write up and photos to editor@CougarClub.org it would be a great story to share.

Agreed this is a cool story.

That newspaper ad is incredible. The “Young at heart” tag is also very spooky; I’ve had things like that coincidence occur many, many times during my life. One of the most recent events was when I bought the Hydroglove business. The previous owner has a few videos of the dry suit on youtube with his niece as the model. The videos were filmed at a reservoir in Boise, ID, where the PO lived. I bought the business and moved it to Phoenix, AZ. The coincidental part is that when I looked closely at the youtube videos (use search term Hydroglove), his niece was wearing an Arizona State University sweatshirt!

I guess I should also reveal that I traded in another Ford when I bought that Eliminator. It was a 1969 Ford Cobra Jet C-6 with about 25,000 miles. To this day, I do not know what model it was since the only badges on the car were on the hood scoop “Cobra Jet”; fastback Fairlane? I do remember walking out of the sales office, new car keys in hand, and the service manger approached me and mentioned he had some headers and some pinned Halibrand wheels with slicks that would “probably” fit on my car. Gee, I wonder how he knew that?

Thanks again for posting that newspaper ad. Blows me away.

This would be a great story for ATSOTC Magazine. I can’t wait to see more photos and especially Chuck behind the wheel again.

You should email a write up and photos to editor@CougarClub.org it would be a great story to share.

Chuck’s story does appear in the Eliminator Book.

This is an awesome story! And then the newspaper ad to top it off!!! What are the channces?

Not sure about where to ask this but I noticed a depression in the center of the front of the frame. Is this normal or did someone in the past lift the car with a ball-screw jack?

I guess it’s a damage caused by a jack. At least I’ve never seen that on any of the cars I’ve restored.

My car had a bit of damage in that area too, and the bottom of the valence and strut rod channels were bent up too. I think most was due to a parking bumper or curb hit. But there is also a small dent like that in the middle that looks like it’s from a jack. Love the story of Top Cat!

sure looks like jack or curb damage. Mine was beat up here as well and took some straightening which I still need to clean up some.

The next question deals with the lower radiator brackets that seem to be symmetrically bent on either side of car (see pics below). Should the lower portion of these guys be straight?

The other side is also bent the same way. They can be straightened, if necessary but how should they look?

Thanks in advance,
Chuck

There are some good images on the WCCC website https://secure.cougarpartscatalog.com/g1j3.html?sessionthemeid=26

The next question deals with the lower radiator brackets that seem to be symmetrically bent on either side of car (see pics below). Should the lower portion of these guys be straight?
The other side is also bent the same way. They can be straightened, if necessary but how should they look?

Thanks in advance,
Chuck

You will either need to straighten them or replace them. The way that they are bent now they are not usable. No way that you can rest the lower radiator tank on them with them bent under the crossmember.